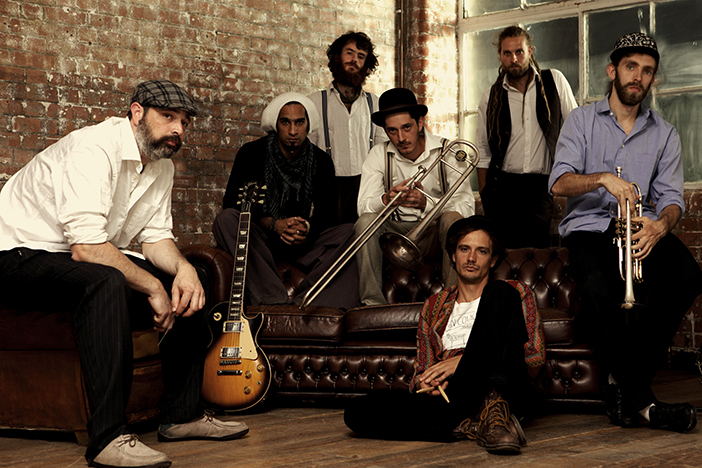 Whether you’ve caught them busking around town or on a festival stage somewhere, there’s little chance you weren’t moved to dance to King Porter Stomp’s energetic blend of jazz, hip hop and ska. The Brighton big band are back on the road this month, stopping off at the Synergy Centre on the 23rd for a headline show alongside scratch DJ extraordinaire JFB, DJ Detta and local rap collective Along Came Shifty.

After the laidback vibes of 2012’s record ‘Shuffle’, KPS returned earlier this year with a new album full of conscious state-of-the-world lyrics backed by urgent upbeat ska. A couple of line-up changes probably helped revitalise the band, but it was politics that provided the spur.

“Everybody’s been affected by what’s going on in the world recently and I would say our lyrics certainly reflect that,” frontman MC Jonesy told us. “I find it hard to stay positive when we see the inability of humans to treat each other as equals, along with all the negativity that we are fed by the media. But there are also a lot of amazing people out there giving themselves, time and care to create a change that will help affect lives and futures that inspire us all. That’s what inspires me to write.”

The latest single, ‘Put Down Your Weapons’, is a classic reggae-style protest song with a wah-wah guitar groove and some trademark big brass lines. “This is Arif’s hook that powerfully speaks for itself,” says Jonesy. “The lyrics cover the issues of using weapons to solve problems. It’s a shame the message is one that has to ring out repeatedly over the years from the masses’ voices.”

It’s testament to the band’s songwriting verve that themes like this can sit happily with the sort of music that’s irresistible to dance to. It’s even possible that the lyrical element is what makes a King Porter Stomp gig so joyous; positivity in the face of ceaseless bad news makes it mean so much more. Of course, the blazing horns certainly help.

“I think these elements fit together, I think people can take it,” Jonesy explains. “If you listen to the journey of our recordings you’ll hear that we’ve always followed our inspiration and never worried about sticking to a structured sound. We’ve enjoyed the freedom that gives us, but we do have some tough singles coming out and we’re enjoying our sound more than ever.”

Ben Bailey is the editor of Brighton Source and a freelance writer. He also plays in a few bands and can sometimes be found giving talks on a variety of niche topics. He lives in Brighton and rather likes it.
← PREVIOUS POST
Ludovico Einaudi Review
NEXT POST →
Optimo, Sat 23rd April
Mailing List
Recent Posts
Website developed in Brighton by Infobo
Copyright © Brighton Source 2009-2021
King Porter Stomp, Saturday 23rd April - Brighton Source