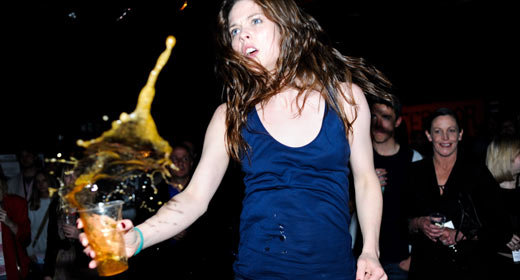 1920S SECRET SPEAKEASY
Audio
Audio’s turned into a veritable 1920s speakeasy replete with glamorous décor and private booths so you can watch your gals flip their flapper dresses while you sip liquor and smoke cigars on the terrace. Down below there’s Enzo Siffreddi to help you sweat through midnight with some minimal tech-house. (ZC)

BLIND TIGER NYE
Blind Tiger
The venue that was Hector’s House is now owned by the guys behind Playgroup who 1) know Brighton’s music scene almost as well as us, and 2) know how to throw a party. So when they say, “the best of the year’s DJs” they mean it, and they’ll be playing the finest disco, funk, soul and reggae, perfect for an eclectic New Year’s Eve. (ZC)

THE GARDEN HOUSE PARTY
Brunswick
At The Brunswick they’re recreating the vibe of a derailed house party with Discomendments, Bobby Beige and London’s infamous Horse Meat Disco crew, who we saw at Disco Deviant last month and can verify that their tastes in new wave disco are impeccable. It may be cold but some throbbing Horse Meat should certainly help warm your cockles. (ZC)

PUMP UP THE JAM / BLOW AFTER PARTY
Coalition
Pump Up The Jam host their 90s hip hop dance party from 9.30pm which precedes the Blow After Party. The former was huge fun on Halloween – with a really up for it crowd – so we think you’ll have a whale of a time. For the later sets, Vincent Manganaro, Carlos Riz and Aaron Palaez take over the decks from the early hours with their party house leanings, helping to further delay your hangover. (ZC)

SUPERCHARGED
Concorde 2
He’s a globetrotting superstar DJ with awards, accolades and critically acclaimed label Shogun Audio, but he’s also a local lad who loves Brighton. He is, of course, Friction. He tops Supercharged’s NYE bill with garage don Hatcha close behind and the Digital Sound boy Benny Page. Dynamite MC takes over the mic while the breaks, drums and bass roll underneath. (ZC)

STONE LOVE / BLAH BLAH BLAH AFTER PARTY
Digital
To kick off proceedings we have the Stone Love DJs spinning all indie no landfill before the Blah Blah Blah boys take over for the after party. Joy Orbison tops the bill with his house, disco and dubstep coalescence which will ensure your New Year drops with style. Tom Frisco and Poundance’s George Nunners help lay the road to oblivion. (ZC)

BAD TASTE PARTY DJS
Fogg’s
It’s up near Seven Dials, so if you’re looking to avoid the typical trashy madness of the town centre, Fogg’s bar is a good bet. The Bad Taste Party DJs play shameless pop classics from Abba to Wham via Madonna. There’s also karaoke so when you’re drunk enough, which knowing you will be pretty quick, you can fumble with the microphone and ruin all your favourite tunes. (ZC)

THE BIG ITCH VS STAY SICK
Green Door Store
Can’t be bothered with NYE? It’s just another night and all the clubs are too expensive, right? Not the Green Door Store, it’s free, even on New Year’s Eve, and they’re holding a big bad Brighton soundclash. Stay Sick’s rockabilly and punk competes against The Big Itch’s primeval party riffs with 60s R&B, rock’n’roll and garage. It’ll be a night of good records, bad dancing and lots of falling down. (ZC)

IT IS STILL 1985
Haunt
“If you’re gonna get stuck in a Groundhog Day-style eternal time loop would you really choose the era of the air-punching power ballad?” asks our sarcastic listings curmudgeon, Ben. Well, yes, yes we would. The 80s were awesome so let’s not celebrate a new year gracefully, but instead pretend that time doesn’t exist, only perms, sports jackets and coke. (ZC)

STICK IT ON
King & Queen
The tail end of this year has been full of calls for financial justice, social democracy and economic equilibrium, and the Occupy Brighton protests opposite the King & Queen have obviously rubbed off on the pub. Their NYE will be celebrated with the democratic DJing of Stick It On, so you’ll be able to listen to exactly what you want when the ball’s dropping. (ZC)

HOT WUK
Life
Bashment might not be the immediate genre you associate with winter – in fact it’s the opposite, but at Life this NYE you can pretend like it’s summer as Sticky and Stylo G handle vocal duties while Rinse FM’s The Heatwave plays the best in dancehall, bashment and soca. So get your tickets and your carnival costumes then dance like you’re at Notting Hill. (ZC)

SCHTUMM
The Tube
PBR Streetgang are made up of Bonar Bradberry and Tom Thorpe who just love to boogie so who better to join them than our cover star, the new disco gee Maxxi Soundsystem. As if that wasn’t enough, Ben UFO, Donga, Leon and Lorca also deliver the turntable goodness with their house, techno and 2-step stylings for the after party. Schtumm know their underground house vibes and show that The Tube, although less than a year old, is a venue brimming with maturity. (ZC)

GLITZY MIKE’S POP BAR
Sticky Mike’s Frog Bar
If you want to do something different for NYE this year check out Sticky Mike’s, the décor will definitely entertain you, the venue itself is full of character and this evening promises to be a treasure trove of sparkly pop gems. (ZC)

LUNARCY
Volks
It’s the ultimate congregation of Brighton’s bass scene with Lunarcy, Freebass and the Junglizm Cru all descending on the Volks for tonight’s celebrations. Jungle pioneers Jumping Jack Frost and Ray Keith will be in full effect, as will locals Mr Natural, Unity Hi-Fi and Overdose Reggae. (ZC)

ALICE IN WONKALAND
Hobgoblin
That’s right, Roald Dahl meets Lewis Carrol in this NYE sweet emporium. Follow the white rabbit past the flowing chocolate fountains, beyond the jars of sticky treats and delight in the irresistible free drinks before you venture deeper to the enchanted wonderland garden where DJs play for the Mad Hatter’s tea party and there’s a caterpillars’ chill out area where you can relax on giant toadstools. Get your fancy dress thinking cap on and grab your golden ticket. (ZC)

PRODUCER’S RETREAT
Caxton Arms
The ladies and fellows behind music-art collective Producer’s Retreat know how to throw a party, and New Year’s Eve will be no different. Famed for their elaborate themed events that have become increasingly decadent over the year, this night’s got a Speakeasy theme, so expect evening dress, gangster-inspired musical beats from local producers and some very suave artwork from their resident designers. And lots of lovely alcohol. (JMM) 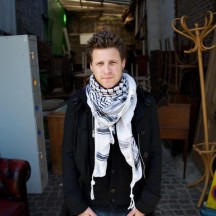