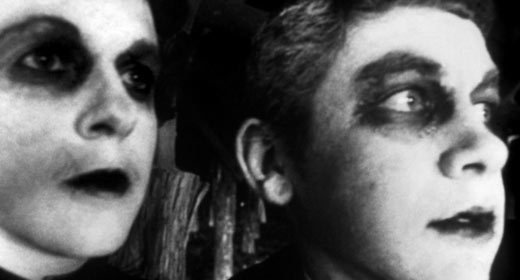 FILM: CARNIVAL OF SOULS
Duke of York’s Fri 2nd Dec
Similar in mood to contemporary episodes of The Twilight Zone, documentary specialist Herk Harvey’s only feature film is a brisk, black and white horror classic. A lonely young woman finds herself drawn to a deserted amusement park on the edge of town, which admittedly seems more attractive than either her church organist job or her lunk of a would-be suitor. The film’s subtle sound design will be matched by David Thomas and Two Pale Boys’ live underscore this evening. (SH)

COMEDY: The Treason Show
Pavilion Theatre Fri 2nd – Sat 3rd Dec and Weds 28th – Sat 31st Dec
Oft mentioned within these hallowed pages, and the cheeky chaps behind the long-running Treason Show are usually right on their farcical, melodramatic game in their annual send-offs. They warm up with a late autumn gig on the first weekend of the month, then launch into reflections on a glorious year of cuts and crises by lampooning Cameron, Clegg and their army of curmudgeons. For satirists, if no one else, these have been a vintage 12 months. (BM)

ART: An Xmas Knees Up
Ink_d Fri 2nd – Sat 24th Dec
The photo accompanying Ink_d’s end-of-year party depicts a Jesus waif clinging to a miniature blue cross – just one of the fine selection of subtle potential Christmas gifts for those subversive souls in your family on offer here. With price tags which shouldn’t leave you scratching around under the sofa on Boxing Day and a load of original works created by the roster of excellent artists they’ve welcomed through the doors this year, this is surely worth a snoop. (BM)

FILM: THE TRIP
Duke of York’s Thurs 8th Dec
For this screening in aid of Brighton’s Amaze charity, Steve Coogan and Rob Brydon are reunited for a Q&A session alongside a screening of last year’s understated BBC comedy The Trip. Directed by Michael Winterbottom, the semi-improvised series saw fictionalised versions of Coogan and Brydon tour the northern English countryside, reviewing restaurants and subtly sending themselves up. Although likely to have sold out, there’s another chance to catch Winterbottom’s theatrical edit at the Dukes on 19th December. (SH)

ART: Brighton Craftaganza
Fabrica Sat 10th Dec
Seek out the blog page for this refreshingly unpretentious craft fair and you’ll find a whole heap of beautiful creations from local makers. They range from whimsical felt toys to infinitesimal bits of exquisite jewellery, delicately weaved fabrics, cool canvas art and enough nifty needle and thread work to make even the most stringent stitch connoisseur beam. Between this and the aforementioned Ink_d offerings, we reckon we’ve got you sorted for some unique and lovingly made presents. Mince pies all round. (BM)

THEATRE: Talking Dog
New Venture Theatre Sat 10th – 17th Dec
An original work which sounds too intriguing to turn down, as a man’s final 24 hours on earth are traced using “the magical possibilities of theatre”. We know little more beyond that – although it’s fair to say that such concepts usually lead to glorious mischief in the hands of New Venture’s improvisers – but masked and unmasked characters, bouts of puppetry and the unbreakable bond between man and hound are all visited along the way. (BM)

THEATRE: Charley’s Aunt
Little Theatre Mon 12th – Sat 17th Dec
Brandon Thomas’s late 19th century play could best be described as buffoonery on a scale you’d struggle to match, even if you dropped three tabs and spent an entire New Year’s Eve circumnavigating Church Street. Taking in unrequited lust, an idiotic uncle and the arrival of a mystery Brazilian aunt who ends up being impersonated by a Lord dressed in drag… it’s all there in a three-act charade which, apparently, broke records with an original London run of 1,466 shows. (BM)

TALK: Skeptics In The Pub
Caroline of Brunswick Tues 13th Dec
Richard Robinson has a thing or 10 to teach the world. Having established himself as an exponent of epochal revelations – attested to by his two books, ‘Why The Toast Always Lands Butter-side Down’ and ‘Why The One You Fancy Never Fancies You’ – the founder of the Brighton Science Festival is back to explain how to succeed in business. Blowing a raspberry at Peter Jones et al, he’s spent time studying ants to devise a foolproof, simple path to stock exchange greatness. (BM)

SCIENCE: THE BIGGER BANG VI
Dome Weds 14th
Largely thanks to Professor Brian Cox injecting some mum-friendly sex appeal into proceedings, science is no longer the exclusive reserve of the nerd, the geek, the spod, the playground beating-magnet. In this show, featuring fellas from TV’s Bright Sparks and Ministry Of Mayhem, a giant chemistry set has its safety warnings flagrantly ignored, with exciting explosion and fire-based results. It’s a wonder anyone involved has eyebrows or functioning eardrums, but it’s all good family fun with an educational bonus. (NC)

DANCE: Hofesh Shechter – Political Mother
Dome Tues 31st Jan
There are at least 10 dancers in the bone-rattling blinder that is Political Mother, but the snare drums, spiralling guitars and caterwauling vocalists in front of them mean this acclaimed piece has been more frequently compared to a rock gig than the dark dance theatre it is at heart. The groundbreaking, eye-shatteringly marvellous Hofesh Shechter Company are already touting this as the only trip to paradise by the sea they’ll be making in 2012, so catch them while they’re here. (BM)