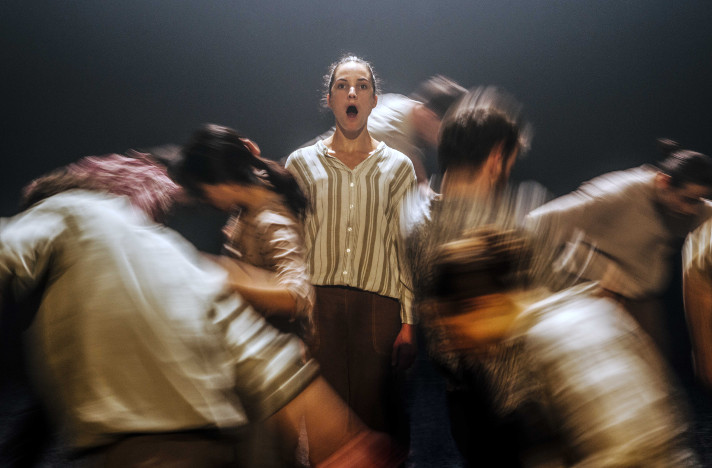 As the Brighton Dome foyer filled for Hofesh Shechter’s hotly anticipated Grand Finale, there was an odd texture to the air, like a sea mist had rolled into the building. A dense fog hung above the bar, clouding the sight of the excited festival-goers, though no-one seemed perturbed by it. A sign stuck to the door to the auditorium explained that harmless smoke would be part of the performance: if anyone was concerned about it spreading lustily throughout the building, they kept quiet.

The haze made sense when Part One of Grand Finale began. During the opening minutes, dancers writhed three-deep, like reflections or echoes, giving the illusion of double vision and the impression of uncertainty. Thin lighting barely dispersed the smoke. The costumes in Part One were typical of Shechter’s earlier works, particularly Political Mother, with loose, androgynous garments in muted colours swinging around the dancers’ limbs, providing the folksiness he’s known for. In Part Two the costumes are less traditional, with velour, sportswear and cardigans, but there are movements and repetitions that hark back to earlier sequences; characters are summoned and disbanded, endlessly. The set design – this work is the first time Shechter’s worked with a set-designer – consisted of multiple monolithic pillars that towered above the dancers and could be swiftly moved to transform the stage into crowded rooms or divided spaces, altering the setting in a matter of seconds. The musicians move around the stage throughout, appearing unpredictably through the darkness and smoke and conjuring music that defies genres, slipping as easily into rave as classical.

Grand Finale is a sensual masterpiece that doesn’t rest. A recurring theme of mortality sees open-mouthed, stiff-bodied dancers dragged across the stage, waltzed with, and thrown in the air in celebration. At times, the feeling is poignant, of lost lovers and remorse; at times it’s a heady, impassioned frenzy; an Irish jig; a techno rave in a crowded nightclub basement. Abrupt anger in a scene with dances that look like fights, accompanied by music so loud it’s almost painful gives way to a gentle folk dance, with bubbles drifting down like snow; a nostalgic, mournful sentiment. Where Schechter excels isn’t in creating a narrative, but crafting a fervent connection of human emotion that’s almost palpable. Unlike in his earlier works, the dancers exhibit a raw physicality when using each others’ bodies to glide and clash across the scenes. There’s an undeniable interdependence, almost a conversation, between the scenes on stage and the entranced audience, which makes Grand Finale a truly exceptional work. As the audience is plunged into darkness for the final time, accompanied by a soulful, aching violin, a woman loudly and breathily states: “stunning.”

And it is. The love affair between Hofesh Shechter and Brighton Festival is lengthy and documented, but Grand Finale was, simply, stunning. After the show, Shechter stayed behind to discuss the inception of the show, in the remote Italian countryside without outside distractions, and that fact that most of the dancers have been with the company for many years, making the creative process increasingly open to experimentation and boldness. When asked why he chose the name Grand Finale, Shechter laughs. This is a work dedicated to mortality, but also to new beginnings, and in which death doesn’t mean the end. This is a paean to the perpetual cycle of life, and perhaps that’s what makes it so intensely spellbinding to watch.