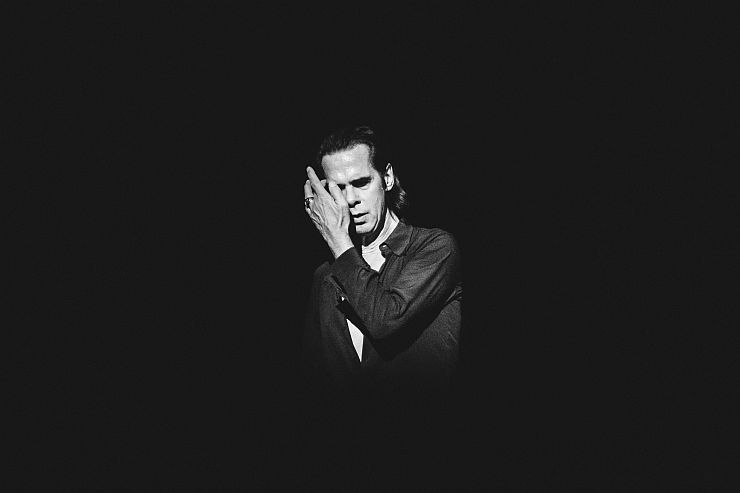 One of Brighton’s greatest ‘creatures of the night’ has offered himself up to his fans with this world tour that promised an evening of no-holds-barred audience Q and A interspersed with solo renditions of his extensive back catalogue. Demand was so high that a second date was added and this also sold out almost immediately. The reviews have been almost universally glowing so how would he feel returning to the city where one of his darkest life events occurred?

At 7:30 sharp the lights darkened and the man took to the stage as a recording of his ‘Steve McQueen’ poem faded. He began, as many present would have agreed, with ‘God Is In The House’ sounding like a croaky Scott Walker. The song ends with a flourish and he greets the latecomers.

We are informed that these shows are basically an extension of the Red Hand Files, which began as a forum to answer fans’ questions but has since escalated to his receiving over 100 emails per day, all of which he reads. This has opened a portal into the disturbing minds of his fans. He explained that after nailing arena shows he wanted to bring fear back into his live performances and how this particularly applied for these final home town shows.

As you’d expect there are a lot of super fans present and there are many reminiscences of meeting their idol in shops or on the train. He’s asked how he keeps his ego intact to which he quickly responds with an emphatic “I don’t”. He speaks of his fascination with his wife and the eternal mystery that the female of the species are to men.

On ‘Higgs Bosun Blues’ his voice is both ferocious and fragile, strong and clear with a lingering vibrato. He speaks lovingly of Warren Ellis, the greatest of his Bad Seeds collaborators, and details their working processes on soundtracks and in the studio. When asked how he copes with the horrors of watching world events on the news he tells of watching an assassination on live TV as a 14-year-old and how that affected him and the fact that children can’t avoid bad shit online. However, he added, you can avoid this corruption by reading poetry and literature, and using art and music to counterbalance it.

Many people shared personal experiences, including a former Jehovah’s Witness who discovered Cave’s music after excommunicating herself from the religion. He paced and listened intently to the statement she’d prepared and graciously allowed her to come to the stage to present her book on how his music had helped her. Another person boldly asked for her favourite song and to be allowed to sit next to him while he sang it. Ever the gentleman, he agreed and after a couple more questions she appeared from the wings and awkwardly cuddled him as he sang ‘Ship Song’ to her.

The solo piano set up really suited the songs simply because they are so good – a fact acknowledged by their writer when talking about the writing process behind ‘Brompton Oratory’, a song performed together with ‘Weeping Song’ – a perfect pairing. There are self-confessed stalkers a-plenty and even someone now living in Cave’s old flat who wanted know where the stopcock was. “What’s a stopcock?” came the reply before they discussed the interior design. Each question is answered directly to the inquisitor, a nice personal touch, whether giving a one-word response or engaging in a longer dialogue.

When told his music is therapeutic and asked if he saw himself as a therapist he responded “no but these events are therapeutic for me”, then goes on to tell how the Red Hand Files saved him after his son’s death, by being caught in a communal river of suffering where he knew he wasn’t alone. We learned that ‘Jubilee Street’ was based on a brothel in Montpelier Street but he got the names confused, Johnny Cash was his first musical hero, “there was something evil about him” and he spoke with great fondness of working with Cash when he was desperately ill and how he was transformed when the band started – “music cured him in front of my eyes” and also that he is a big fan of transcendental meditation.

The three hours flew by and he asked for requests for the last two numbers. After being bombarded with many excellent suggestions he said he wouldn’t be playing any of them and gave us a beautiful ‘O Children’, pointing with his right hand to add emphasis, and finally ‘Skeleton Tree’ with its repeated fade out line “It’s alright now” providing a perfect end to an extraordinary evening in the company of a unique and fascinating artist.