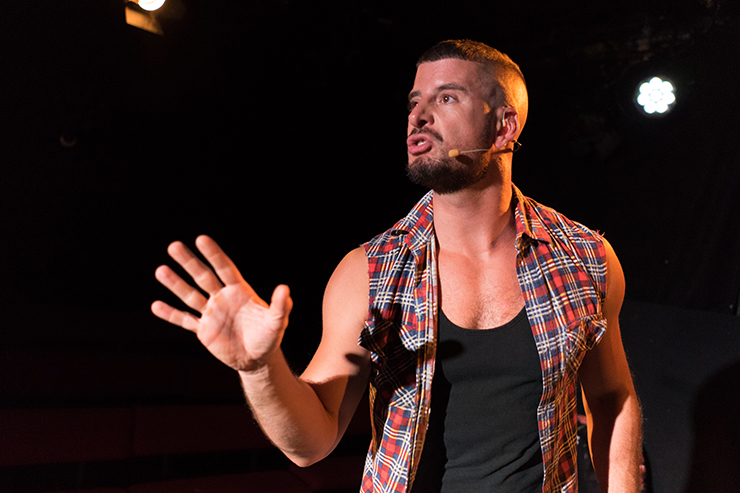 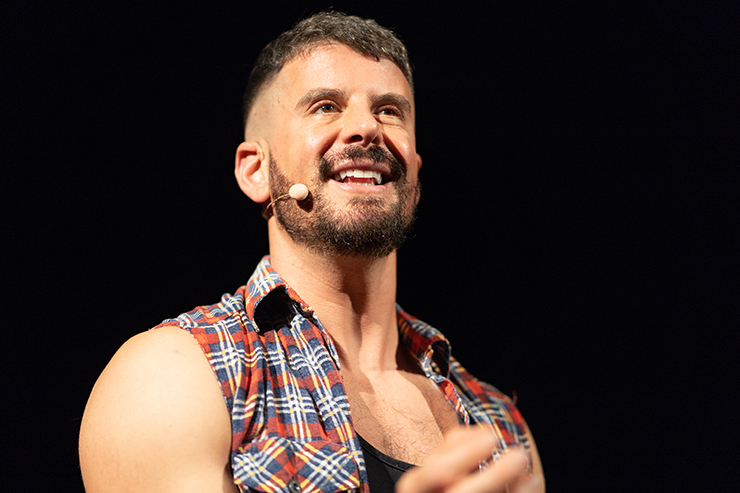 You think queer is cool? Right now it appears to be in fashion and welcome in the mainstream. But, according to writer-performer Alexis Gregory, there’s also been a backlash.

In the last few years, the press has carried reports of queer people being beaten up on the streets of Brighton. Elsewhere the provision of sex education that includes gay and lesbian issues has been contested.

These were some of the contemporary issues we explored with Alexis whose new performance at the Marlborough, ‘Riot Act’, explores 50 years of the LGBTQ rights movement.

Imagine three gay guests at your dinner table. Their 20-minute monologues are tender, sad and challenging. They tackle radical drag, activism, youth and identity. And it’s not just about Stonewall, according to Alexis. “It’s about youth, ageing, sex, glamour and Hollywood.” He sees it as “radical but accessible” but adds: “don’t expect it to be politically correct.”

Alexis, who performs each role, is both a writer and performer. He’s been a professional actor since he was 15 and wrote his first play in 2013. “I like challenging stuff, subversive stories, hard-hitting and in your face,” he says. Alexis is also passionate about theatre. “It’s about the moment, it’s in the room, it’s unfolding in front of you.” He’s already thinking about two new plays and a possible film.

Brighton has been a favourite place for Alexis for many years. So he’s looking forward to Pride and performing at the Marlborough which has always been at the heart of the scene.

But what about Pride in Brighton? Some voices say that it’s become too corporate. But, as Alexis points out “it needs money and backers” although for him “it would be a shame if Pride moves away from what it’s about.”

The performance, part of a nation-wide tour, is directed by Rikki Beadle-Blair MBE and produced by Rob Ward. It forms part of the celebrations of Brighton Pride and Stonewall’s 50th anniversary.

(Riot Act is recommended for audiences of 16+ years and contains themes and language of an adult nature).

Mike lives in Brighton. This is a full time occupation. He's also a researcher, writer and activist. Any time left over he spends hanging around cafes and pubs listening to people on their phones. He loves theatre that pokes into difficult places. You won't find him on Facebook.
← PREVIOUS POST
Conversations With Nick Cave Review
NEXT POST →
Rock House Festival, Sat 27th July