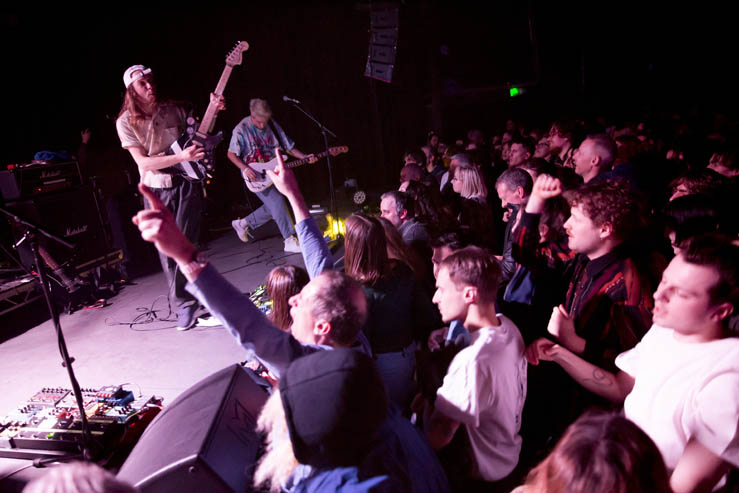 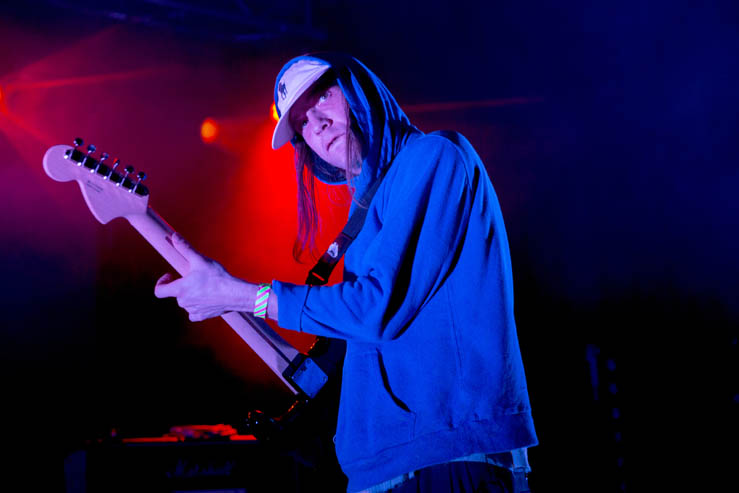 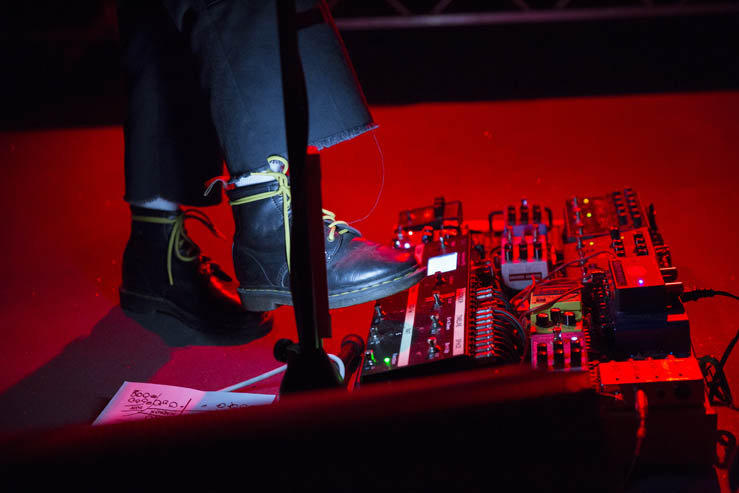 In retrospect, it’s interesting that the 2015 single that first alerted us to DIIV referred to the hormone associated with happiness and well-being. ‘Dopamine’ is a glistening, guitar-laden slice of dreamy indie-shoegaze. A taster for their second album – the enigmatically titled ‘Is The Is Are’, a sprawling seventeen-track album that explores the pros and cons of getting high – the song feels determinedly upbeat. The buoyant atmosphere is, however, undercut by tortured lyrics that deal with heroin abuse: “Crawling out from a spiral down/ Fixing now to mix the white and brown/ Passing out…”

It is the disconnect between the gentle jangle of the melodies and the bleakness of the accompanying words, that creates DIIV’s unique sound – but also points to the reasons for the chaotic 2016 tour and subsequent break up of the band. Now, having come together again, DIIV have produced their third, and arguably best, album, ‘Deceiver’. Released on independent record label Captured Tracks in October last year, it is altogether darker and heavier than its two predecessors, but also more honest. The brooding guitar sound throughout accentuates the fragility of the vocals, where the lead vocalist feels the need now to “Apologise to all I see/ For everything I used to be.” So when we hear that DIIV are playing at Chalk, we have to head down to check for ourselves whether, live, the band are as solid as this most recent offering suggests. 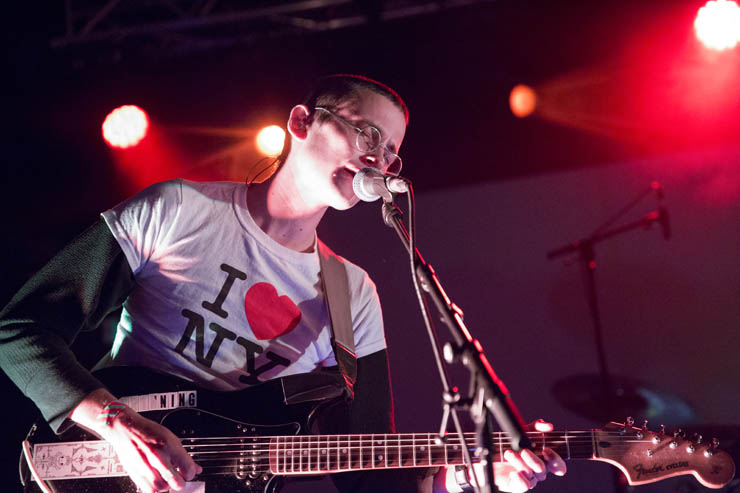 First up, though, are Captured Tracks stablemates, Canadian band, Chastity. The five-piece band is the vehicle for songwriter and lead singer, Brandon Williams, to unveil his harsh, bleak and at times unforgiving view of the world. “There’s a special place in hell for the Christian right,” he intones on ‘Dead Relatives’, “Bury your parents tonight.” While on ‘Bliss’ he makes this heartfelt request. “All I ask/ Is the impossible task/ Of being happy as a human and making it last”. Subject matters includes drug use, crime, the Ku-Klux Klan. This is dark stuff, personally analytical and politically astute, yet delivered with such driving post-punk energy, it never drifts into self-pity.

“This is our second best song,” Williams announces half way through, and the band burst into ‘Sun Poisoning’, one of the strongest tracks from their second album, ‘Home Made Satan’. “Free, I’m not free,” he sings over and over, the yearning voice vulnerable against the chugging beat. “Free, I’m empty…” The depiction of Trump’s America as portrayed in ‘Flames’ is equally impassioned: “Lust for lashes/ Your country’s in ashes/… America’s a masochist.” Their closing number is ‘Chains’ which, although it comes from 2018’s ‘Death Lust’ is still, they claim, “our best song”. With its measured build-up, its blitzkrieg of hammering drums and wailing guitar, plus lyrics to match – “Don’t waste your pain on hate!” – we’re not about to disagree. The set is over all too quickly, and Chastity exit the stage leaving us wanting more.

Soon up are headliners DIIV, who emerge onto a blood-red stage to the sound of a low, ambient drone. An American band, formed in 2011, they were originally called Dive – after a Nirvana track – but changed the spelling as there was already a Belgian band of the same name. Under the leadership of Zachary “Cole” Smith, the band has been through different incarnations. The current line-up is Cole (vocals and guitar), Andrew Bailey (guitar), Ben Newman (drums) and Colin Caulfield (bass, guitar, keyboards and vocals).

They break into a spirited version of ‘Horsehead’. Grungy yet melodic, the track sets the tone for the whole gig. Touchstones for those unfamiliar with their music are Pearl Jam, Slowdive, REM at times, and of course Nirvana themselves. ‘Skin Game’, with its delicious guitar riff, comes next, followed by a succession of other tracks from the ‘Deceiver’ album. The performance confirms that live, the songs are every bit as good as, if not better than, the recorded versions. ‘Taker’ and ‘Between Tides’ are particularly well received by the sell-out crowd, while the meaty version of ‘Blankenship’ has the moshpit leaping, and a lone bouncer has his work cut out trying to prevent spontaneous displays of crowd surfing.

The main set concludes with a blistering rendition of the sombre ‘Acheron’. Although most of the material has been from ‘Deceiver’, DIIV haven’t abandoned their backlist. There is a roar of approval from the crowd as one of our own favourites – ‘Doused’, from first album ‘Oshin’ – kicks in with its familiar bass throb. And when the band return to the stage for an encore, they deliver an impassioned version of ‘Dust’ from the ‘Is The Is Are’ album.

It is these two performances that show just how far Cole has come since the last tour. Back then he was agitated on stage, berating the sound engineers, apologising repeatedly for the quality of the music; stopping and starting – and, in the process, making the audience feel awkward and ill at ease on his behalf. Tonight, he seems so much more at ease. He asks the crowd if there’s any song we particularly want to hear. He jokes around with the sound engineer and bass guitarist. He informs us that this Brighton gig is the tenth and final show in the UK before heading off to Europe – and we believe him when he reveals that it has also been the best show so far.

He seems to be having a genuinely good time throughout, and his mood has proved contagious, both on and off the stage. And when they leave the stage for the final time, the crowd spills out onto the street feeling well entertained and buoyed up. ‘Dopamine rules!’ as one punter is heard to say. Whatever, it’s great for all concerned that DIIV are back to their best.

Paul Stewart is an author - mainly novels for kids - but his main love has always been live music. These days, the words that fill his head at gigs often turn into reviews for Brighton Source, the going-out bible for his favourite city anywhere, ever.
← PREVIOUS POST
Whiskey Preachin' Album Review
NEXT POST →
Hot 8 Brass Band Review