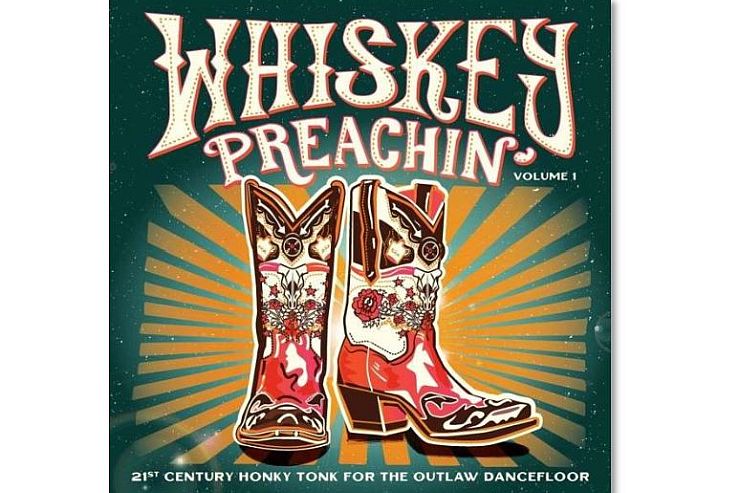 This new album has been lovingly put together by two of Brighton’s most in-the-know DJs, who’ve been putting on their Whiskey Preachin’ nights around town for seven years now. Both have very eclectic tastes, with ‘Shamblin’ Tony Sexton also responsible for the Swinging Dick’s compilations and occasional afternoon sessions playing only original 78s with Chris ‘Sick’ Moore, who is also responsible for the amazing artwork, and ‘Señor Mick’ Hosie a long-time mainstay of 1BTN with his Garden of Earthly Delights show and a new ‘yacht rock’ night at Dead Wax Social. Together they share a love of shit-kicking honky tonk music and have now curated an album, released on their own label, of modern examples of this genre, proving this music is alive and well.

As you’d expect there are a lot of story songs, taking in religion, whiskey and general hellraising, plus the country staple of getting dumped. There’s a full-throttle opener with Mayeux & Brossard declaring themselves “reckless, young, cool and handsome” armed with weed, wine, cocaine and rum. This is followed by James Scott Bullard – a man with major girlfriend troubles as he sings of how they all choose “Jesus, jail or Texas” rather than stay the distance with him.

Kathryn Legendre is joyfully losing it, and borrows a few bars from Kris Kristofferson’s ‘Sunday Morning Coming Down’, on the bouncy ‘Going Crazy’ while The Reeves Brothers’ swaggering version of Merle Haggard’s ‘C C Waterback’ recalls David Allan Coe’s ‘Take This Job And Shove It’.

Ole Whiskey Revival’s ‘Ramblin’ sums up the touring musician’s lot well with a great lyric about having “spent more nights with this guitar than any gal I’ve ever known”.

Many of these artists hail from Texas, but proving it’s not just the Lone Star State that has the best tunes, Seattle’s Darci Carlson tells a rough and tumble tale backed by some superb harmonica playing. She sums it up perfectly replacing Yippee Ki Yay with Adios Mother Fuckers on the riotous boogie of ‘Rat City Bound’. Kristina Murray pitched up in Nashville from Colorado and delivers some home truths on ‘Lovers & Liars’ (they’re one and the same).

There are twelve great tracks in all and you don’t have to be a trucker to appreciate this album but if you are, you couldn’t wish for a better soundtrack blaring out of your rig on a cross-country run.

The Whiskey Preachin’ DJ duo will be unveiling the album at their residency at The Great Eastern in a couple of weeks so if you’re celebrating just having been paroled or drowning your sorrows after being dumped on Valentine’s they’ll have the soundtrack to suit your mood. Remember, Whiskey Preachin’ Records are here to save your soul, one record at a time.

The album is released on Friday 6th March, and there will be a launch party at the Whiskey Preachin’ night on Friday 13th March at The Great Eastern. It’s a vinyl-only release and copies will be available at the launch, from Resident Records and online.

For more information and to listen to their radio shows head to the website.