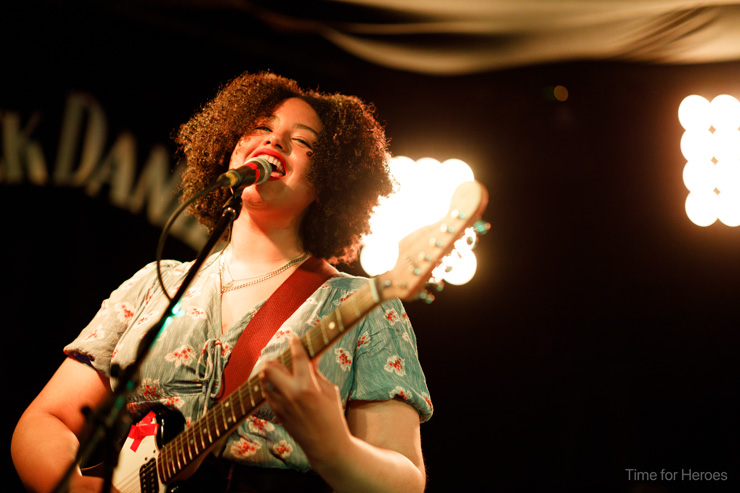 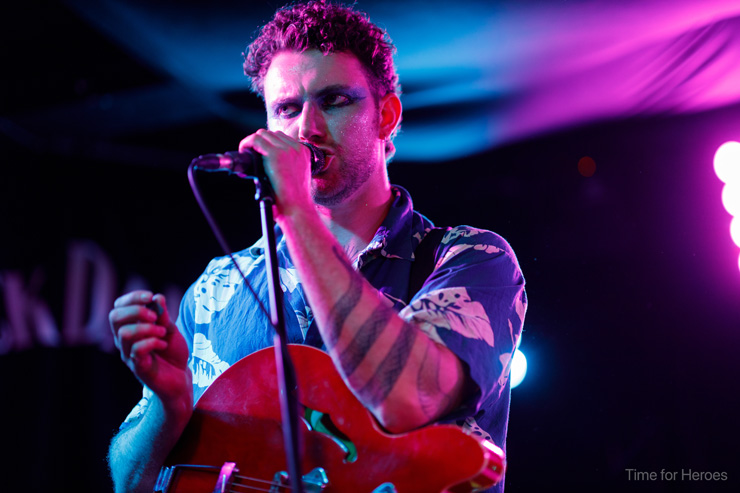 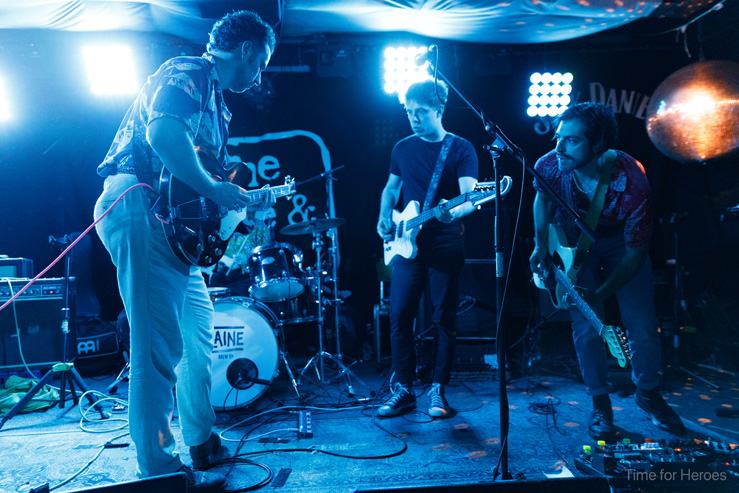 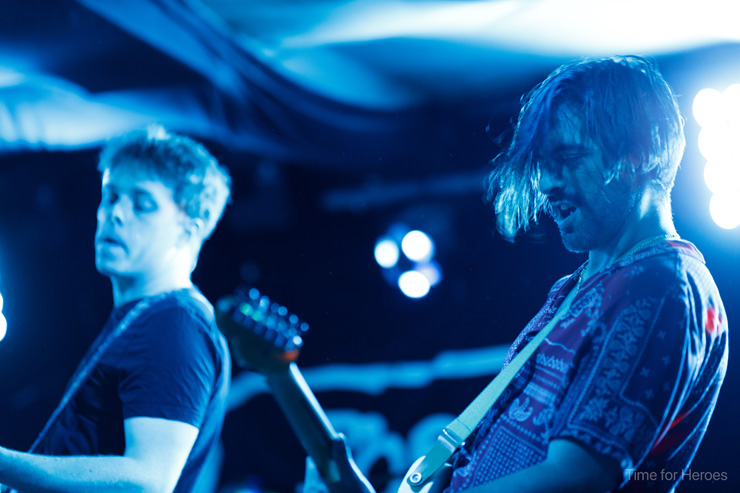 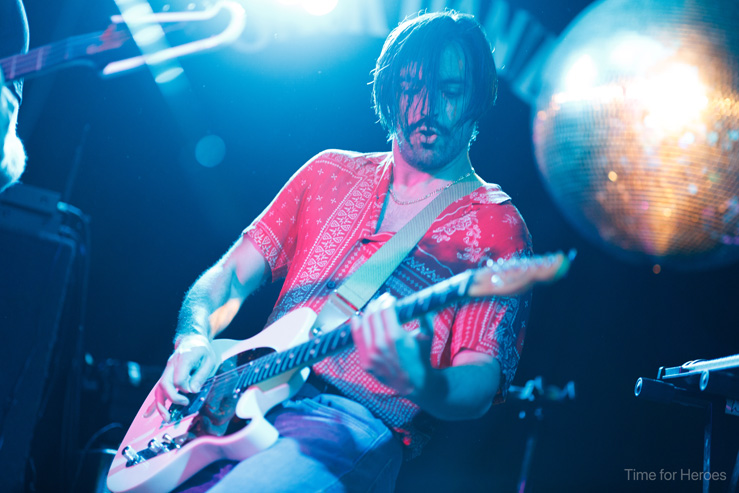 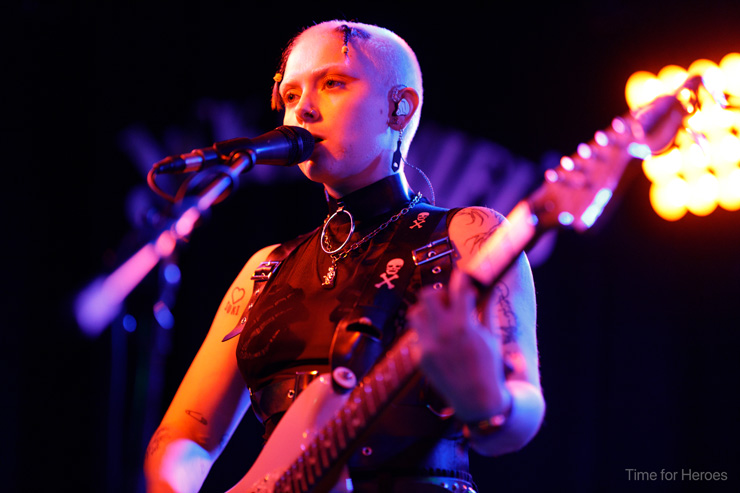 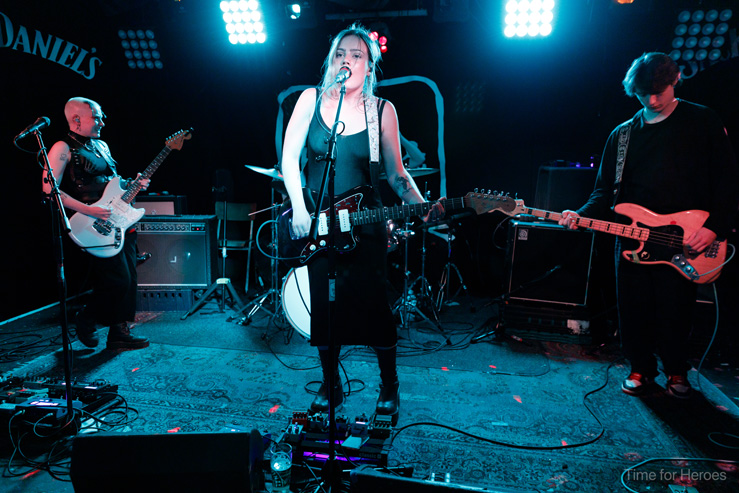 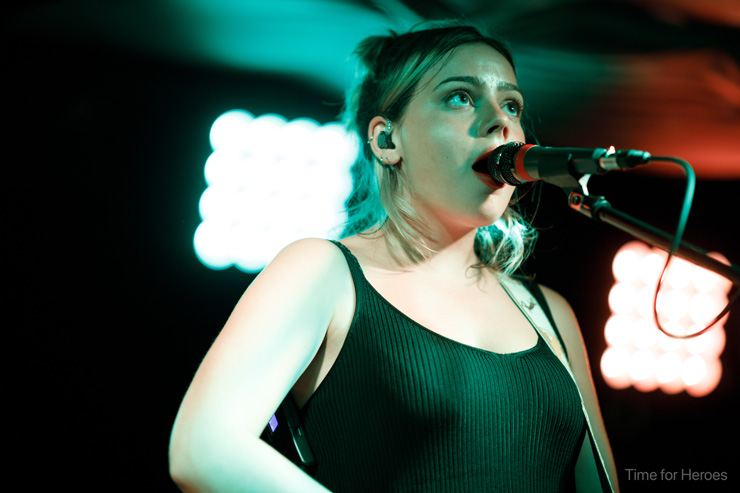 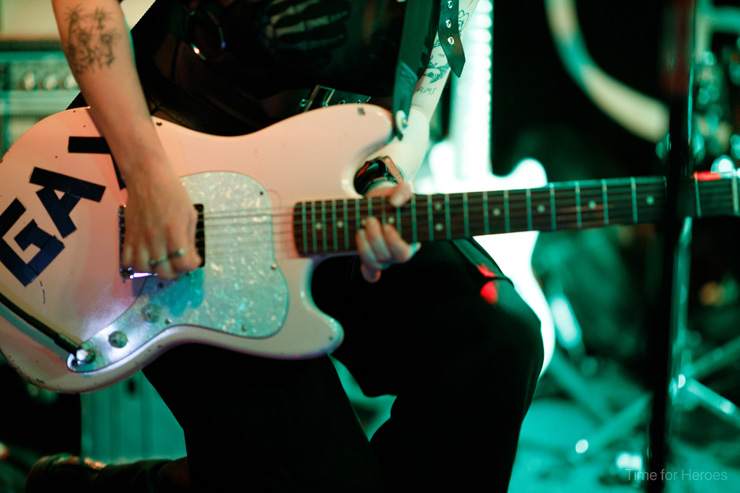 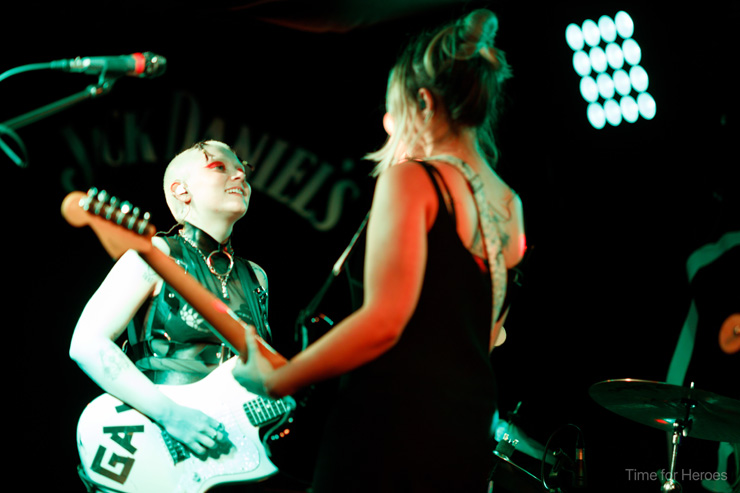 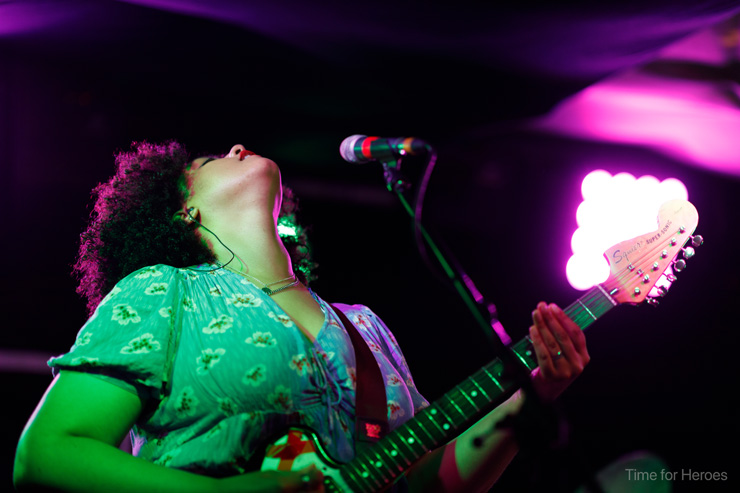 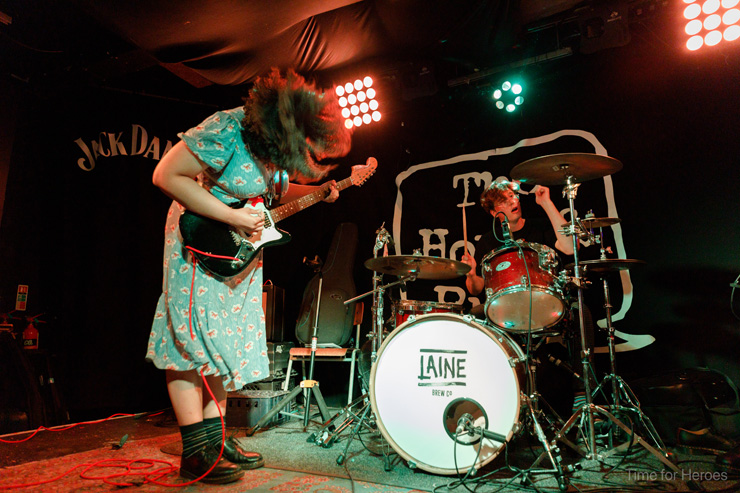 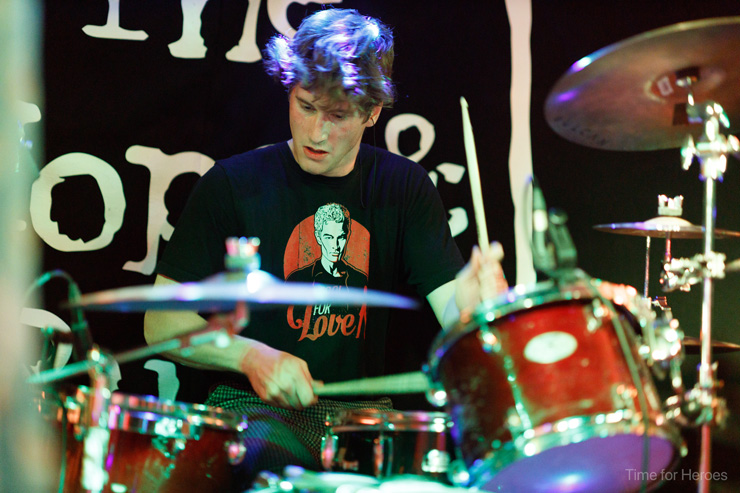 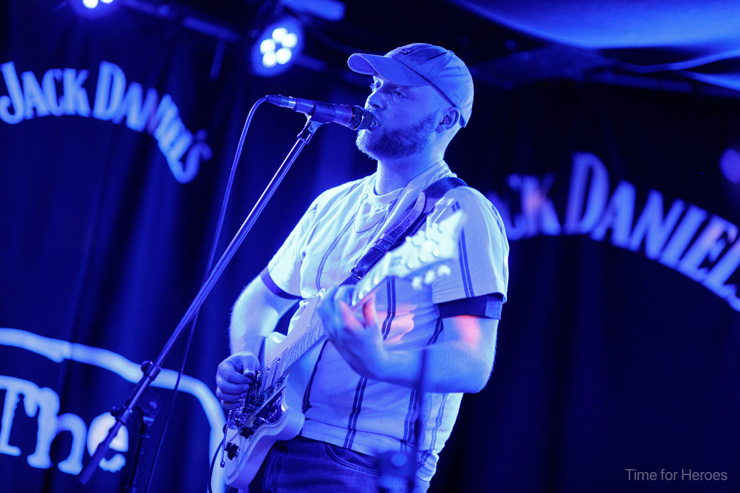 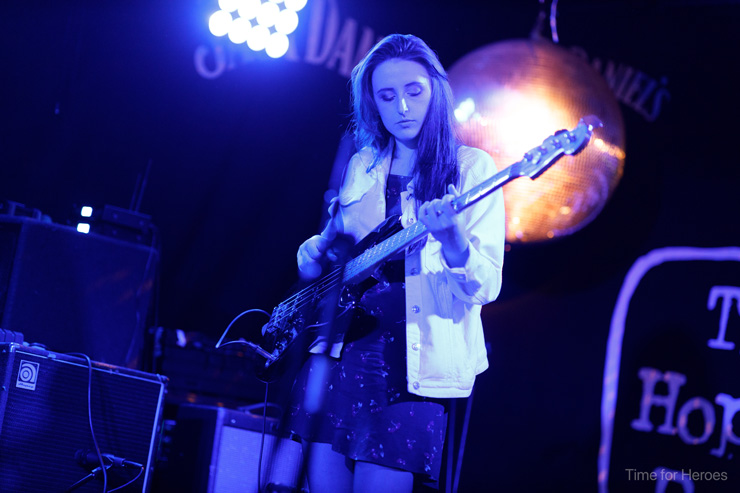 With its remit of spotlighting exciting new musical talent, Hidden Herd Presents evenings have developed a reputation for excellence, and last night’s show at the Hope and Ruin, showcasing four acts, is a belter. First up is London-based four-piece, Murman.

With a chuggy guitar riff and an “ooh ooh”, the band launches into a series of dark, scuzzy, high-energy rock songs. Comparisons are never easy, and sometimes pointless, but we’re getting hints of Joy Division and The Cure, while vocalist David Murdoch’s occasional baritone takes the music off into The National territory. ‘Achilles’, with its grungy hooks is a crowd-pleaser, as is the more frenzied ‘Panama’.

Slower tempoed, but no less powerful is ‘Billie Holliday’, and we’re also taken with ‘Falling Down’ – “which is out tomorrow” [17th June]. With its driving drums and swirling guitars, it recalls the energy and storytelling strength of Springsteen. And, like the Boss himself, Murdoch proves to be a great crowd manager, slipping down from the stage and making his way through the audience as he sings, patting us on the shoulder, including us all in the show.

A brief snippet from Madonna’s ‘Like A Prayer’, and we’re into the last song, where now familiar themes – heartbreak, guilt, sexual frustration – are explored further. “I don’t wanna fall in love again,” he declares, but given that such emotions lead to songs this powerful, he should probably reconsider.

Next up are Demonstrations, an alternative guitar three-piece based in Brighton. There’s an overall 80s-type vibe to the music. At times, such as in the bouncy ‘Holy Water,’ they remind us of XTC. ‘Evening Run’ is gentler, and we sing along with the chorus, “Just like you/ Just like you…” Next up is ‘Fabric Rings’, which was released this February, but could be older still, the harmonies and swirly Indian drone recalling sounds of the 60s when the Beatles first alerted a whole generation to such music.

In sharp contrast, ‘Clang’ – released in 2020 and the first track that alerted us to the band – is a much more abrasive affair, with an almost Gang of Four choppy guitar sound and lyrics to match, “Then I’ll be sick in the toilet of diamonds and wipe my arse on the door.” This is a band that, while in no way plagiarising, has seemingly soaked up influences from the whole pop canon, and is now taking immense pleasure in offering their own take on the eclectic mix. You might want to catch them headlining at the Green Door Store on 28th June.

The third band to take the stage, Lemondaze, are a four-piece – Isis, Rosie, Jonty and Finn – who were born in Cambridge, but are currently London-based. Intrigued by last year’s EP, ‘Celestial Bodies’, we’ve been itching to catch them on stage.

The recorded music is a dark, pounding shoegaze/indie mash-up, with more than a nod to Germany: the drive of motorik; the industrial sadcore of Soap&Skin. Nothing, though, has prepared us for the power of their music live. Swirling guitars, thunderous basslines and relentlessly driving drums form a hypnotic wall of noise, over which sweet, dreamy vocals come floating; sometimes a lone voice, sometimes the warmest of harmonies.

It is an intoxicating mix of emotion and passion that nudges the listener towards breathless ecstasy. The band themselves cite Wolf Alice as an influence, but this is something else entirely. “Enya on Ritalin”, someone behind us suggests. Velvet Underground at their most driven, perhaps, with Nico’s vocals softly intoned. Of contemporaries, maybe Scalping come close to the emotional thrust. Whatever, it is a magnificent sound, brooding atmospherics building to a crashing maelstrom; now euphoric, now desperately sad – soundscape after soundscape to as yet unmade films. Check out 2019’s ‘Neon Ballroom’ or 2021’s ‘Twin Paradox’ and turn the volume up to 11. You’ll get some idea of what they’re like live, but then check them out for real when they next hit Brighton. We’ll be there!

Last up are another band that has been on our radar for a while; Fräulein, and it’s a case of from the sublime to… well, the sublime. But of a different type! The two-piece – guitarist/vocalist Joni Samuels from Northern Ireland and drummer Karsten van der Tol from the Netherlands – has, over the last year, carved out a sound for themselves that, though could be loosely termed ‘indie-grunge’, is utterly distinctive.

The pair met at a Bristol party in 2018 and instantly clicked musically. The following year, ‘Pretty People’ was released, a song notable for its incisive lyrics: “In their sights/ Circle of/ Pretty People/ Smiling/ Hissing behind their backs/ Always fun/ It’s not real/ They can smell/ How different I feel/ I can’t fall over them/ Won’t bring myself to/ Kiss their hem.” There are echoes of Patti Smith in the delivery; in ‘By The Water’, perhaps a murmur of PJ Harvey. Other songs feel more contemporary, drawing comparisons to Brighton’s own Porridge Radio, or fellow Northern Irish performer Soak – or maybe, from across the pond, Portland’s Weakened Friends. Ultimately, though, apart from the “if you like x or y or z, you might like Fräulein”, the comparisons are irrelevant. Fräulein sound like Fräulein.

There’s a wonderful chemistry between the two musicians, and it’s easy to see why they clicked in the first place. With two of the early singles out of the way, it’s time to showcase last month’s four-track EP, the modestly titled ‘A Small Taste’. ‘Drag Behind’ starts with a gently plucked riff and insistent drumbeat, then gradually climbs to a clatter of jagged rhythms and touchingly soulful lyrics about loss and its effects – “I’m not carefree and elastic like you. I sit here tight as a rubber band, I do.”

‘Breezy’ is no less intense, as a “sugar-rushed” Joni describes feelings of being an outsider. “I’m standing on my tippy toes, just watching how it goes”, while ‘And I Go (La La La)’ gets us all singing with her, our voices drowned out by the crash of cymbals. ‘Golden Boy’, ‘Big Cool’, ‘Belly’… The quality of songwriting is formidable and, live, the two musicians’ performance is totally captivating – there’s even a short drum solo, highlighting Karsten’s technical skill. Like all good things, though, the set comes to an end way too quickly. Joni turns, Karsten stands, and in a gesture that is at once touching and profound, the two of them shake hands; job well done!

It has been an outstanding evening and we cannot wait to see what Hidden Herd Presents next.

Paul Stewart is an author - mainly novels for kids - but his main love has always been live music. These days, the words that fill his head at gigs often turn into reviews for Brighton Source, the going-out bible for his favourite city anywhere, ever.
← PREVIOUS POST
Difficult Art And Music's 1st Birthday
NEXT POST →
Noisy Review
Mailing List
Recent Posts
Website developed in Brighton by Infobo
Copyright © Brighton Source 2009-2021
Fräulein Review - Brighton Source