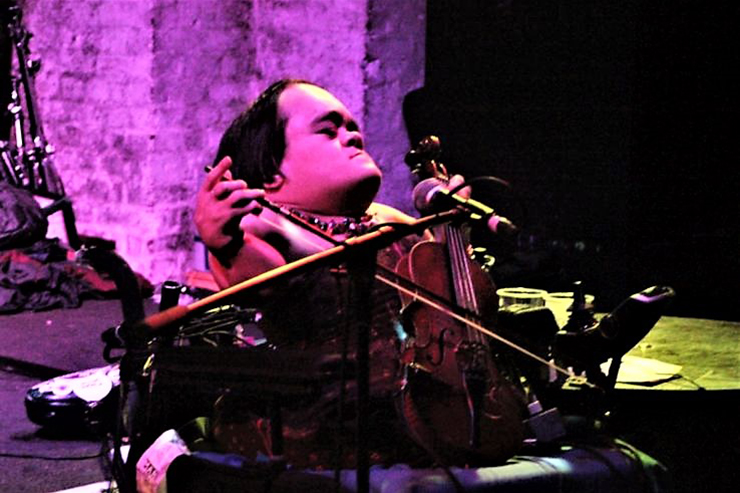 Tonight the Green Door Store plays host to Gaelynn Lea, a singer and classically-trained violinist from Duluth, Minnesota. In 2016, she won NPR’s prestigious Tiny Desk Contest. This year she released her latest album, ‘Learning How To Stay’. Aware of her award-winning talent, the mixed audience is eager to hear these songs performed live.

First, though, is M. Butterfly, a Brighton singer-songwriter who accompanies his delicate songs with acoustic guitar. The evocative lyrics are delivered with a quiet intensity that at times recalls Conor Oberst. His set includes a fine cover of Low’s ‘Last Snowstorm Of The Year’. Next up is Mara Simpson, whose self-penned songs span blues, folk and Americana, and draw lyrical inspiration from influences as diverse as Maori creation myths and the story of Louis Zamperini, a WW2 pilot whose remarkable survival was captured in the film, Unbroken.

Then it is time for Gaelynn Lea herself to play. Like the preceding acts, she performs ‘in the round’, at the centre of the cobbled floor, together with guitarist Dave Mehling and, for a few tracks, Richard Carter on theremin. Born with brittle bone disease, Lea is disabled, and performs from her wheelchair. She holds her violin like a cello, and uses a pedal to create loops of swirling sound that accompany her strong, yet affecting, voice; one that has been likened to that of Joanna Newsom.

After starting with a stirring instrumental version of ‘O Come, O Come Emmanuel’, she moves on to her own songs, which include ‘I See It Too’, ‘Lost In The Woods’ and a particularly moving rendition of  ‘The Last Three Feet’. The melodies lie somewhere between hymns and nursery rhymes, and have that enviable quality of sounding familiar yet totally fresh. Most challenging of all is ‘I Wait’, a song which confronts head-on the intolerable situation that disabled people face daily: “I am still not free in this society. How long must we keep fighting?”

She concludes with a two-song encore. First, appropriately for the time of year, a carol, ‘In The Bleak Midwinter’; followed by one of our favourites, Neutral Milk Hotel’s ‘The King Of Carrot Flowers’. It is an apt ending to a superb set, for Gaelynn Lea herself has visited “that secret place where no one dares to go”. We feel privileged to have been part of such a powerful, thought-provoking and deeply emotional performance.

Paul Stewart is an author - mainly novels for kids - but his main love has always been live music. These days, the words that fill his head at gigs often turn into reviews for Brighton Source, the going-out bible for his favourite city anywhere, ever.
← PREVIOUS POST
KOKOROKO, Tuesday 4th February
NEXT POST →
Blood Red Shoes Review