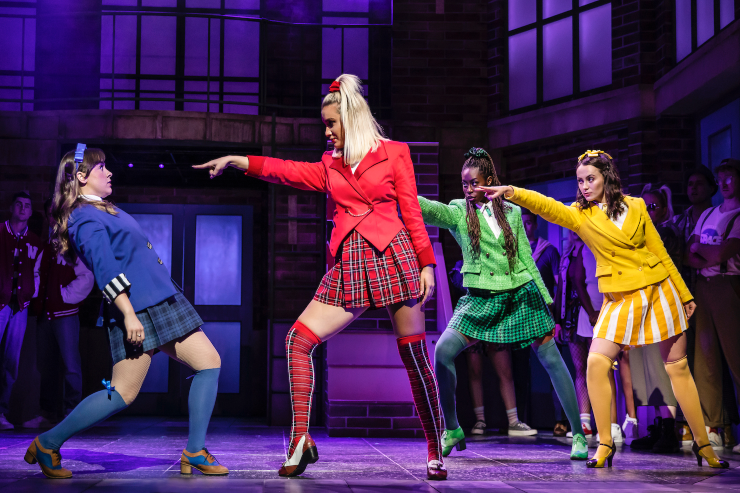 Heathers The Musical – the cult, comedy pop-rock musical based on the 1988 film of the same name – starts semester at Theatre Royal Brighton this week as part of a nation-wide tour hotly following on the success of two seasons in London’s West End. With the showiness of a prom queen and as much subtlety as a quarterback this production excels at feelgood, laugh-a-minute action buoyed along by fantastic pop hooks and spectacle.

Veronica Sawyer looks to survive her time at Westerberg High, with jocks, nerds, cheerleaders and outsiders all jockeying for popularity and status within the locker-lined corridors. At the top of the social ladder, comfortably and coquettishly, perch the Heathers – ever-popular, cruel and capable of elevating or eviscerating those around them on a whim. Veronica finds herself taken under the wing of this conniving trio and experiences all the perks that come with this new-found acceptance. But there is a downside to every upswing and soon love and lives begin to fall apart as the finely balanced schoolyard hierarchy is unsettled by teenage angst, anarchy and everything else buried deep (but not deep enough) below the surface.

This pastiche of high school social hierarchies is packed to the rafters with every archetype, cliché and trope running riot within a show that packs more shine than the track team’s trophy cabinet. Andy Fickman’s production is incredibly well put together. Brash, vibrant and cutting – like a rainbow in a killer heel – this show is, more than anything, pure fun and it knows it. The whole piece allows itself to run away with its own awe and audience – peppered tonight with an adherent fanbase of “Corn Nuts” that lovingly coax, clap and cheer when required – it only occasionally stops to catch its breath. In these moments of relative calm the musical manages to deliver scenes of tenderness and maturity seemingly “beyond its years” – this surer anchoring allowing it to so deftly dance and trill across subjects that require immense tact when broached (suicide, loneliness, mental health) so as not to belittle or appropriate. It certainly helps that a punchy catalogue of hits pulls and punctuates the action throughout with one hook rolling into another as part of a seamless parade of surefire sing-alongs.

Rebecca Wickes leads a faultless cast as Veronica Sawyer, her voice soaring as she carries the show’s largest numbers, revelling and delighting in what is clearly the perfect vehicle to celebrate and showcase this breed of musical theatre. Heathers Chandler, Duke and McNamara (played by Maddison Firth, Merryl Ansah and Lizzy Parker respectively) are present tonight in all their maleficent magnificence. Their embodiments of the teen demi-gods, dripping with made-up menace, have the audience ready to stand and clap from the show’s second number. We obligingly wait until the curtain, the ovation all the more enthusiastic for having to do so. Simon Gordon also shines as troubled outsider J.D. and Mhairi Angus delivers arguably the show’s most heartfelt moment, a beautiful rendition of ‘Kindergarten Boyfriend’ that pulls the rug out from under the polished front heretofore presented.

Because, ultimately, there is a tender heart beneath all the pop and rainbow-palette fun. An edge that dares to shine an (albeit glittery) light on the alienation and insecurities that underpin the drama, glamour and pretence of high school. While the primary focus may be elsewhere, the show certainly does not shy away from this central crux and instead allows it to ground the bounce and ebullience it so capably carries.