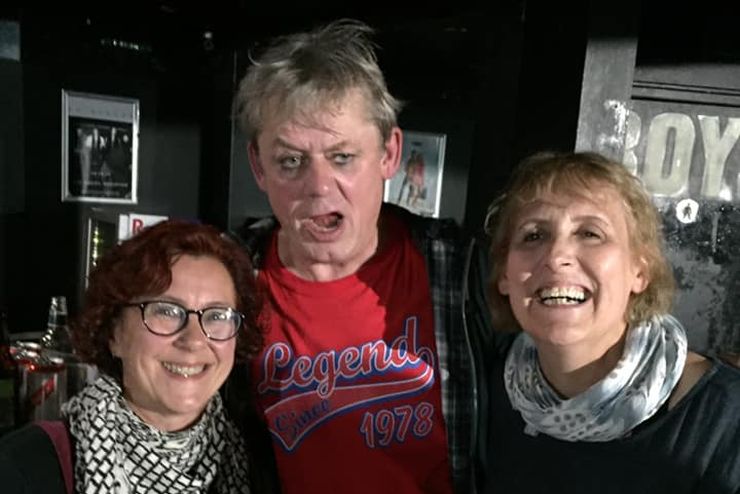 Show opener John Otway was graciously posing for selfies at the merch stand before parting the crowd to get to the stage. He started with his first hit ‘Cor Baby, That’s Really Free’ and its B-side ‘Beware Of The Flowers…’ followed by an explanation of who he was for the benefit of younger members of the audience – there were some. Aided by roadie/straight man Deadly, he treated the crowd to a host of gadgets and gags and subjected his forehead to quite a battering on Headbutts. Set highlight and a sign of his fans’ devotion was the heckle-along ‘House Of The Rising Sun’.

With his band cranking up the opening riff of his Top 10 hit, the man himself bounced out in a ‘Legend since 1978’ T-shirt and trademark anorak and proclaimed “40 years on, I’m still Jilted John, ‘ere we go 2, 3, 40”. The character has woken from a 40-year cryogenic nap and Graham Fellows completely throws himself into it with only a few nods to the fact we’re no longer in 1978. The eternal teenager proved he was more than a one-hit wonder as he worked through selections from the largely under-appreciated album ‘True Love Stories’. The album was well named as each song was a mix of photo love story and problem page anxiety.

It felt strange watching this 59-year-old man-boy high-fiving fans while singing ‘Baz’s Party’ about trying to get a girl upstairs to take her bra off but as a performer he was totally convincing, even when describing the thrill of sitting next to a girl on the bus or falling in love with a pet mouse. The band was very tight and clearly enjoying themselves with the basic punk rock template being expanded to include Chas ‘n’ Dave meets Madchester arrangements, while Fellows’ performance was endearingly shambolic but professional enough to overcome the odd missed cue or misremembered line.

The original A-side ‘Going Steady’ was a complete joy. A catchy pop-punk masterpiece in which John is told he’s “much better looking than Starsky or Hutch” and looking forward to getting ma-ar-ried. Fellows’ younger sister Claire (who was formerly Mrs Ainsley Harriott, fact fans) joined on backing vocals for ‘Birthday Kiss’, a sad tale of seeing your girlfriend snogging another outside the youth club.

‘Goodbye Karen’ could have been a lost Dislocation Dance song with its catchy chorus and indie jazz-pop harmonies and it was surprising to see that so many people knew the words to most of the album tracks. In true showbiz style the best was left to last as the band finally struck up ‘that’ riff as Fellows proclaimed “When all is said and done, I’m still Jilted John”. The crowd lapped it up and Fellows milked it for all he was worth leading the chants of “Gordon is a moron”.

Returning for an encore, ‘Mrs. Pickering’ told of the battle between badly-behaved teenagers and a bad teacher and the skinny-shaming ‘Keira Knightly, Eat Your Dinner’ was a strange hybrid of Frank Sidebottom and Billy Bragg. A quick reprise of ‘Going Steady’ segued into a final blast of ‘Jilted John’, with John Otway joining in the fun as Fellows led the crowd atop the monitors.

It was a brave decision to resurrect a one-hit wonder after so much time but Fellows is such a perfectionist that this was perfectly executed and a joy from beginning to end. He was also a complete gent by making time to chat with fans after the show.