Since their initial split in 2003, Lightyear have always been regarded as true legends in a once-thriving, but sadly deteriorating, ska-core scene. Okay, so they’ve reformed a couple of times due to popular demand. But popular demand can only mean one thing – popularity. This time however, the message Lightyear sent round when they announced this six-date reunion was different. It told of how they hadn’t seen each other for a long time and felt that if they were going to hang out, they may as well play some shows.

Anybody that has ever been to a Lightyear show will remember a few things. Firstly, the amount of energy and excitement they put into their performance. The carnage that is the crowd reacting to their brilliant blend of ska, punk and daft humour. And lastly, the amount of male genitalia you’re inevitably going to lay eyes on. Tonight they provided on all three counts proving that despite a long break they haven’t lost any of their spirit, or modesty.

Their humour is a feature that has always made Lightyear one of those bands you will never forget seeing, entertaining the crowd in between songs that included ‘Twat Out Of Hell’ and ‘Uri Geller Bent My Heart’. Tonight we saw a guy in a pig costume mosh for the entire set, heard stories about the biological inaccuracies of Finding Nemo, and had somebody in a horse mask parade across the stage to a backing track whilst being referred to as Janet Street-Porter.

Not your average night out by any means. But that’s what you come to expect from a band whose singalong sections include “Your mum’s got big hands and shops at Aldi” and quite simply, “Michael J. Fox, Michael J. Fox”. A shame to think we won’t experience this again, but we’ve said that before. 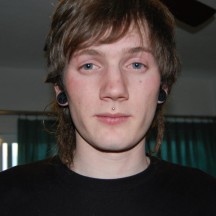 Chris decided to try his hand at writing because he was incredibly bored of working in a clothes shop. He enjoys going to punk and hardcore shows as well as the free party/squat party scene where he occasionally DJs dark drum&bass, hardcore techno and breakcore. No Gods. No Masters. No Bedtimes. Life Rules.
← PREVIOUS POST
Kate Nash Review
NEXT POST →
Richard Herring Review
Mailing List
Recent Posts
Website developed in Brighton by Infobo
Copyright © Brighton Source 2009-2020
Lightyear Review - Brighton Source