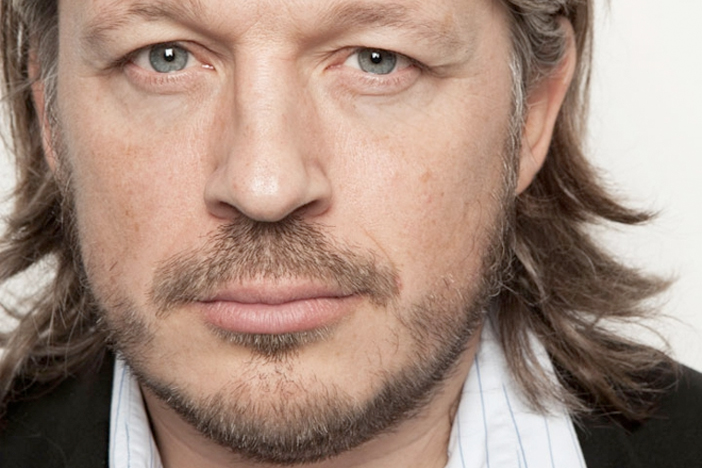 It may be the second time in two years that Richard Herring has reprised a decade-old stand-up show, but it’s not true that he’s running out of ideas. Since Talking Cock originally riled the censors back in 2002 Herring has toured a new show every year – as well as doing countless radio shows, scripts and strange podcasts about him playing snooker against himself. Then again, most of the above contain their fair share of dick jokes. Let’s just say the man is returning to what he loves best.

Don’t worry, there is a point to all this. Dubbed the “Vagina Monologues for men”, Talking Cock began life as an online survey before becoming an acclaimed stand-up show and a widely-translated book. Having been promised a discussion on the changing nature of male sexual identity, we squeeze into the Caroline’s upstairs room for an Edinburgh preview of the updated show’s ‘Second Coming’.

Catie Wilkins is an interesting choice for a warm-up act. “As a sex-positive feminist on the go,” she says, addressing the theme of her set, “I have a real problem with labels.” Her humour isn’t the sort that demands laughs, instead it lets them roll in of their own accord – usually on the back of darkly droll quips. Although this is a preview of a set-in-the-making, her nervous skattiness (two parts charm, one part shambles) threatens to topple the routine entirely.

Nevertheless, Wilkins finds her stride in time to deliver a series of ‘yer momma’ jokes, brilliantly reworked as dry feminist statements. At this point, her self-effacing sarcasm makes sense of non-gags like: “Your dadda is so subtly patronising that your mother feels stifled. And that’s the real reason she had an affair.” It might not work if you’d read it written down (like she did), but it made a nice contrast to the dick deluge to come.

Given the bizarre responses that the public submitted to Richard Herring’s original questionnaire, it would seem that Talking Cock virtually wrote itself. The question “Where have you put your penis for fun?” produced answers such as “a folding metal chair”, “a Noddy pencil toy” and “a toilet roll spooned full of jelly”. There was more, much more. Amusing though it was, the real comedy came with Herring’s perfectly timed asides and inspired meanderings on the theme of the phallus.

Using his findings as a springboard for jokes, Herring consistently wrong-foots the audience by flipping between stat-crunching, absurd reflections and knowingly silly flights of fancy. “I’ve done a lot of research for this show,” he says, playing the beleaguered artist. “It’s been tough. I’ve even found myself staring into the abyss. I knew sooner or later someone would try and stick their dick into it.”

Between bouts of faux machismo and self-denigration Herring strives to make the point that men’s sexuality is rarely addressed outside the inane arena of lad-mags and blokey bragging. Anyone concerned that the show might amount to some sort of male power meeting would have been reassured by the message hidden among the ‘porridge gun’ gags.

Herring concludes that there is no such thing as a usual penis, that size doesn’t always matter and that ultimately women and men aren’t that different. Of course, all this is accompanied by riffs about self-penned nicknames, the world’s only penis museum and the eternal frustration of not being able to bend over quite far enough.

Even if it’s not big, it’s pretty clever and very funny.

Ben Bailey is the editor of Brighton Source and a freelance writer. He also plays in a few bands and can sometimes be found giving talks on a variety of niche topics. He lives in Brighton and rather likes it.
← PREVIOUS POST
Lightyear Review
NEXT POST →
"I Wanna Sleep With Common Dinosaurs"
Mailing List
Recent Posts
Website developed in Brighton by Infobo
Copyright © Brighton Source 2009-2021
Richard Herring Review - Brighton Source