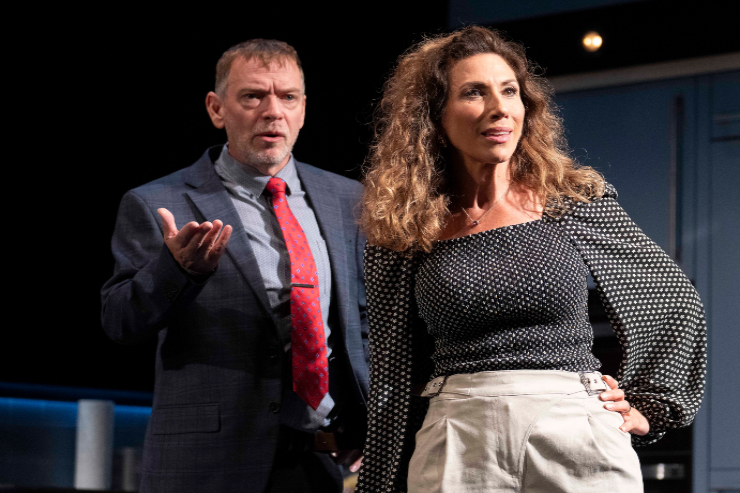 Looking Good Dead, the second instalment in Peter James’ Brighton-based detective series and the fifth of his works to have been given the page-to-stage treatment, “comes home” to the Theatre Royal this week as part of its world premiere tour. Part crime-thriller, part family drama and proof that no good deed goes unpunished…

Tom Bryce returns homes one day to a warring family beleaguered by those sins and secrets that bubble at the surface – financial difficulties, alcoholism – as well as those that tear away below. But today he returns carrying a USB stick, left by the absentminded commuter he happened to sit across from on the train journey that evening. Whether it is to relieve the taxing monotony of unending fiscal jeopardy or perhaps to regain a tiny bit of control over something, no matter how trivial, Tom looks to gain access to the contents of the memory disk, seeking to find a clue as to how he might track down the owner and return it to him. But what he discovers leads him and his family into a sinister underworld and a fight for survival.

Looking Good Dead pits the dark heart of internet voyeurism against the routine struggles of suburbia. An intriguing and at times thrilling story of criminal deviancy and malevolence spills out amidst the clean, cream carpets and soft-close cupboards. Peter James was born in Brighton and has chosen the city as the setting for the Roy Grace series. A plethora of local references are spattered throughout the play like bloodstains across a crime scene – their success marked in wry, knowing smirks from the audience.

Director Jonathan O’Boyle keeps the show tight with the action rolling along at a sharp but manageable pace. Roy Grace, the series’ detective (played in this adaptation by Harry Long), shares short, snappy scenes (weighed down occasionally by gallows humour in need of both humour and gallows) with fellow officers (played by Leon Stewart and Gemma Stroyan). They effectively map out the action as it happens but rightly leave the real working out (the fun bit) to the audience. This renders Grace a rather soulless sleuth but keeps the intrigue rolling amidst the plot’s many twists and turns.

Adam Woodyatt and Gaynor Faye excel as Tom and Kellie Bryce, their tempestuous dynamic sets the home buzzing with a current of frustration and constant unease with themselves always at the centre – sometimes embittered with one another, sometimes enamoured. Luke Ward-Wilkinson does the best with the material he is given which unfortunately reads as a technophobe father’s light-hearted attempt at personifying the strawman snowflake teen incapable of anything other than whining, sulking and talking Fortnite, cryptocurrency and the amusingly vague “password-cracking software” cure-all.

Shaun McKenna has produced a strong and faithful stage adaptation but perhaps therein lies the problem. Peter James is, as ever, guilty of cramming one too many twists into a plot – undoing the genius of the first as it is buried under layer after layer of increasingly improbable followers. The cast and creative team put their all into delivering the story in a punchy, engaging and, at times, genuinely thrilling production but we are left wondering whether an enjoyable evening could perhaps have been an unforgettable one if it wasn’t for the source material.