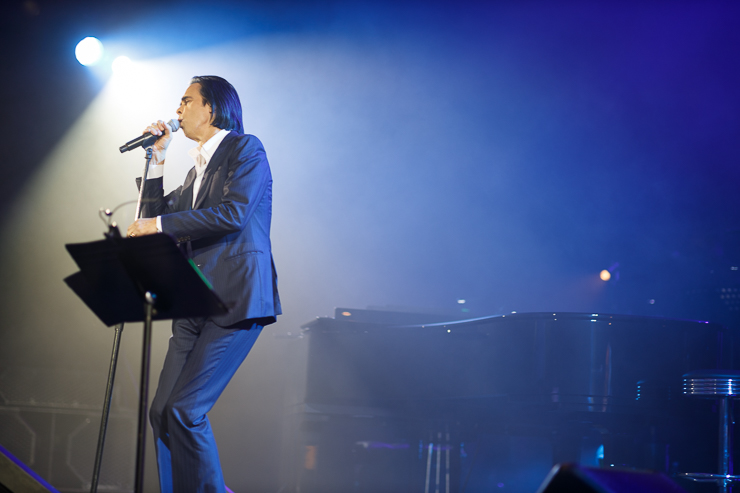 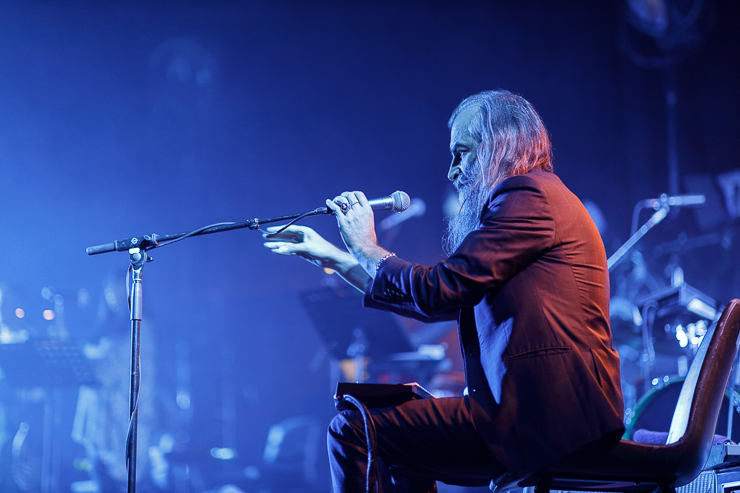 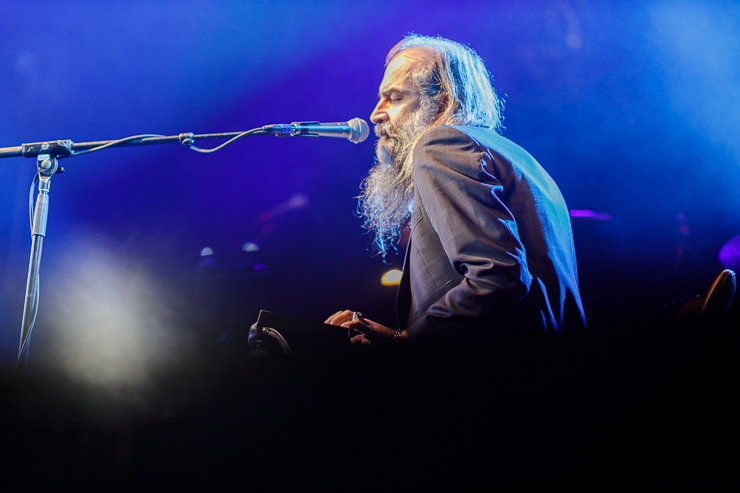 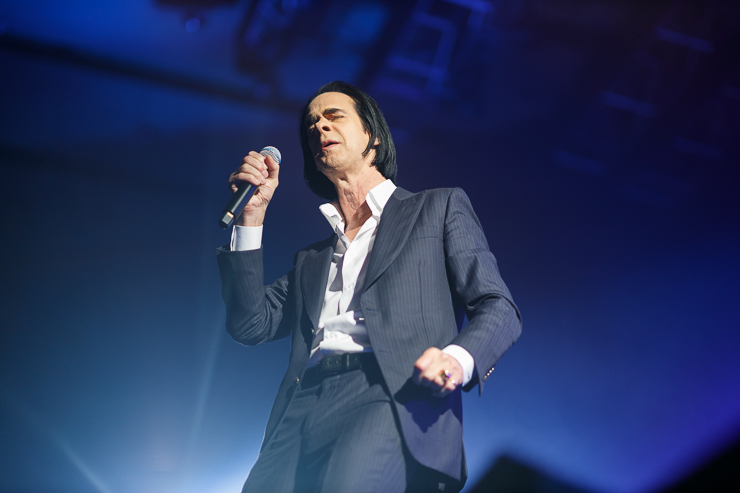 Tonight was the final show of a 20+ date tour primarily for Cave and Ellis’s ‘Carnage’ album conceived and recorded during lockdown. It was also the first live airing of Nick Cave and The Bad Seeds’ ‘Ghosteen’ album which was written in the aftermath of Cave’s son’s death. These songs were released during the pandemic, but not performed in the UK – aside from the Alexandra Palace show which became the Idiot Prayer film. Given the content, this was never going to be light entertainment but the pair were in mischievous moods which helped lessen the melancholia.

The eerie synths of the introductory piece by Monotono subsided as Cave walked out to greet the crowd with a shout of “Brighton!” before a graceful rendition of ‘Spinning Song’ which saw his falsetto voice blend beautifully with the three backing vocalists, Wendi Rose, T Jae Cole and Janet Ramus.

Crossing the stage, Cave begins to conduct Ellis’ vocal opening on ‘Bright Horses’, as Johnny Hostile plays a slow, throbbing bass. The musicians cease as Cave returns to the piano to continue the song to accompany himself. Latest album title track ‘Carnage’ is dedicated to the audience and drifts beautifully with its “it’s only love” refrain.

Bathed in the spotlight, Cave moves to centre stage with his trademark swagger and there is a violence in his voice as he stares and sings “I’ll shoot you in the fucking face” on ‘White Elephant’. He dramatically throws his microphone at the piano then sits to join the vocalists in a soaring gospel crescendo with Johnny Hostile pounding his drums. This bravura performance garners the first of several standing ovations, plus a ticking off from the stage technician who replaces the tossed mic.

‘Lavender Fields’ is introduced as a hymn and begins as a duet between Cave and Wendi Rose allowing her to shine before being joined by her fellow singers. There’s some playful banter with an audience member as Cave asks “do I know you?” to which the reply “not yet” gets a big laugh. Bathed in the spotlight, Cave laments “nothing really matters when the one you love is gone” using his trembling vibrato to great effect.

Ellis switches from lap synth to violin and contorts himself with one or both legs in the air throughout T-Rex’s ‘Cosmic Dancer’. At one point he stops and stands to acknowledge the applause for his solo. He stays on violin for ‘God Is In The House’ and it’s just him and Cave on piano with the song ending in a breathy whisper as the backing singers and the audience sing hallelujah.

The pace changes for ‘Hand Of God’ with a thumping bass drum as Cave prowls the stage with Ellis stomping and writhing in his seat, screaming out as Cave falls to his knees bathed in red light. There’s a spot of pantomime during ‘Balcony Man’ as there’s a call-and-response between Cave and those seated upstairs which he feared would be the version that made it on to YouTube. However, he regained his composure to finish the song in style. With that, there was another standing ovation as the musicians were introduced and the two leads embraced before exiting the stage.

They return with an epic version of ‘Hollywood’ which begins with a spoken word intro over Ellis’s sci-fi sounds. The song builds and builds before descending into discordant chaos with Cave screaming out. There’s a break from the new material with vocalist Janet Ramus duetting on ‘Henry Lee’ and a second encore with arguably Cave’s greatest love song, ‘Into My Arms’, delivered with grace and precision.

The night ends with ‘Ghosteen Speaks’ and as Cave sings “I am beside you” a crowd gathers at the side of the stage where he stands, drawn like moths to a light. What could have been two hours of darkness was actually a deeply moving experience with a performer at his peak baring his soul.