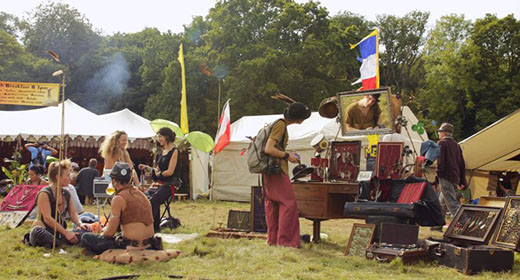 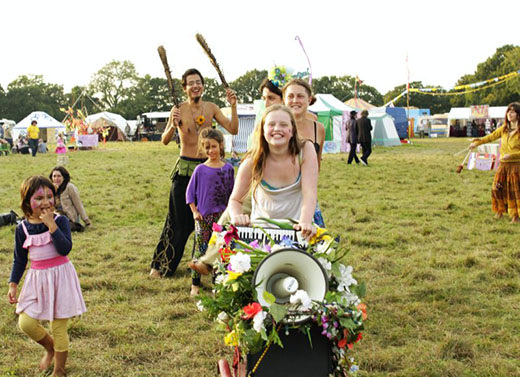 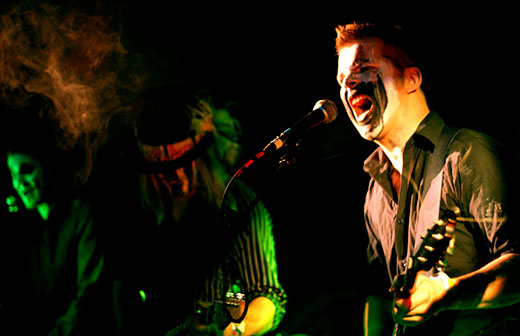 Out Of The Ordinary Festival Review

The best thing about the recent rise of the mini festival is the sheer diversity out there. Whereas once the summer season was ruled like a two party state by Reading and Glastonbury, the proliferation of small-scale local festivals like Out Of The Ordinary has made people realise that there are better ways to spend a weekend than being herded around a mud swamp in front of Bono. There’s better ways to spend your money too.

However, the spirit of Glasto’s original creed is arguably still alive in some quarters. Having been greeted at the site entrance by the word LOVE in big silver letters, it was clear OOTO wasn’t your average mobile-sponsored lager-fest. In place of the usual burger van thoroughfares, the festival field housed a mixture of tea tents, vegan cafes, oddball stalls and workshop spaces – with solar panels and arty installations dotted throughout. Amidst this roamed a parade of stilt walkers, performance hippies and insectoids on antique customised bicycles.

We’d heard that the different areas of the festival were themed by the elements and centred around a stone circle, thus the SOURCE was somewhat apprehensive about just how OTT OOTO was going to be. Would there be druids and dancing dwarves? We saw no sign of them, although we did have to escape from a meditation tent after a man dressed like a cowboy threatened to take us on a journey to meet a gnome. Then again, what festival weekend is complete without chance encounters with odd characters?

In any case, it would seem that OOTO is less a music festival than a festival with music among its varied attractions. Not that there weren’t some great bands. Kicking off the Friday with a blast of rousing gypsy punk, Brighton’s Buffo’s Wake more or less set the tone for what was to come. The Trans Siberian March Band followed suit on the Saturday with an eminently danceable set of Balkan brass tunes, while Wide Eyed Order finished off Sunday’s line-up with their high-energy gypsy-tinged ska. After hours, the DJs took over the tents with a mix of dub and psytrance.

Although Saturday night saw Steve Hillage’s System 7 take to the main stage, the big draw turned out to be a spectacular fire show by Poi Passion – the flame juggling, fire breathing and hand-held fireworks could hardly fail to wow a crowd at night. However, as always, it was the little unadvertised corners of the festival that proved the most memorable: be it the inspiring performance poetry of Rodney Paradox, the kooky Punch & Judy man, or the freedom to mess around with unicycles and assorted circus toys. Likewise, one of the highlights for SOURCE was the late-night sing-songs in Shanks’ Pony – a honky-tonk piano bar built into the back of a converted horsebox.

All in all, OOTO festival perfectly matched the high-minded with the hands-on, leaving plenty of room for straight-up partying. Whatever your bent, this friendly and intimate atmosphere made for a unique festival which was only enhanced by the constant sunshine.

Ben Bailey is the editor of Brighton Source and a freelance writer. He also plays in a few bands and can sometimes be found giving talks on a variety of niche topics. He lives in Brighton and rather likes it.
← PREVIOUS POST
Art And Eat
NEXT POST →
Review: Fenech Soler
Mailing List
Recent Posts
Website developed in Brighton by Infobo
Copyright © Brighton Source 2009-2021
Out Of The Ordinary Festival Review - Brighton Source