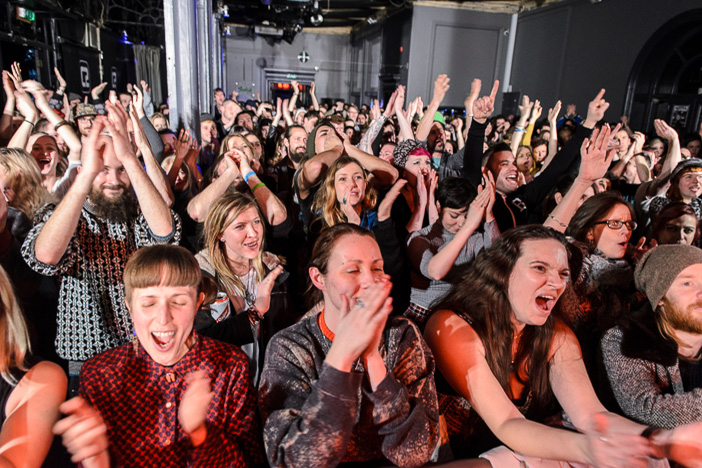 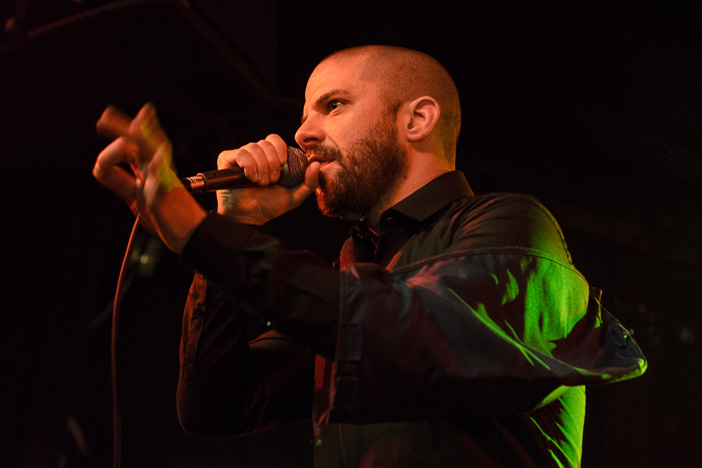 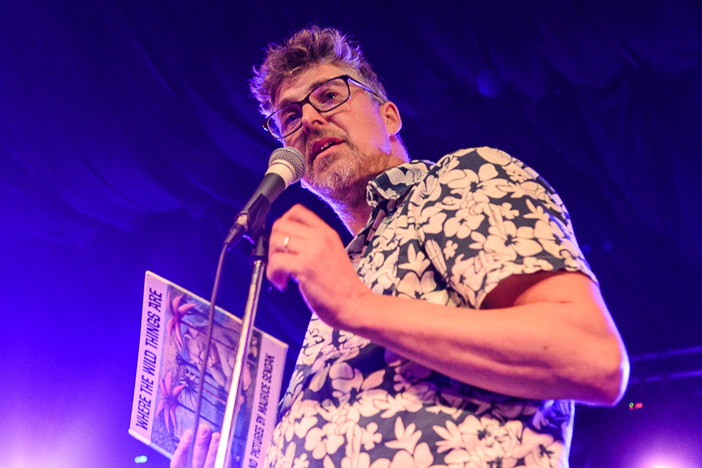 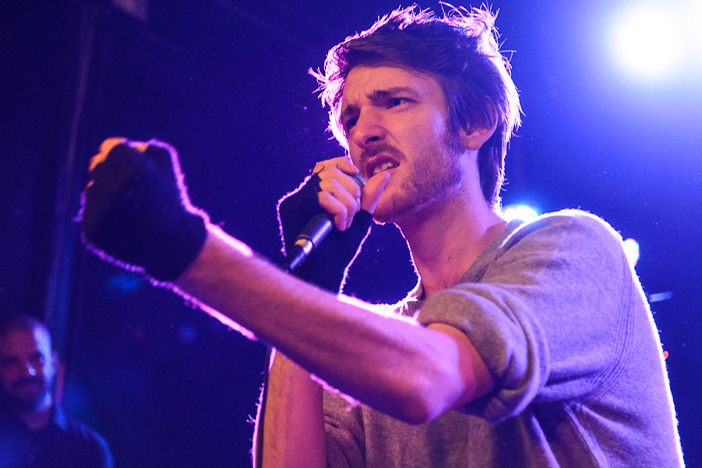 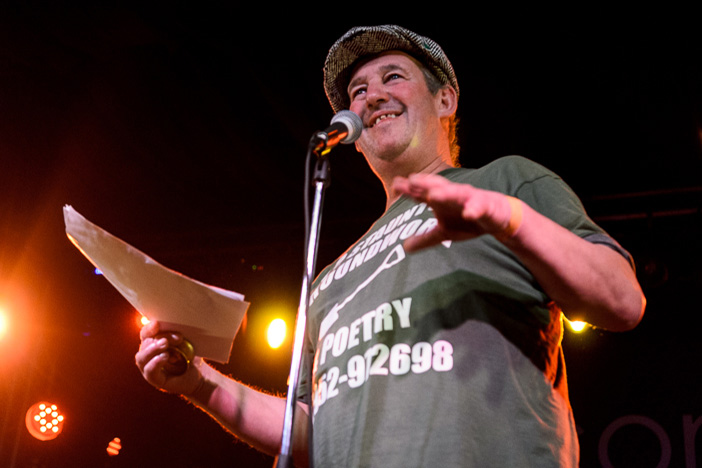 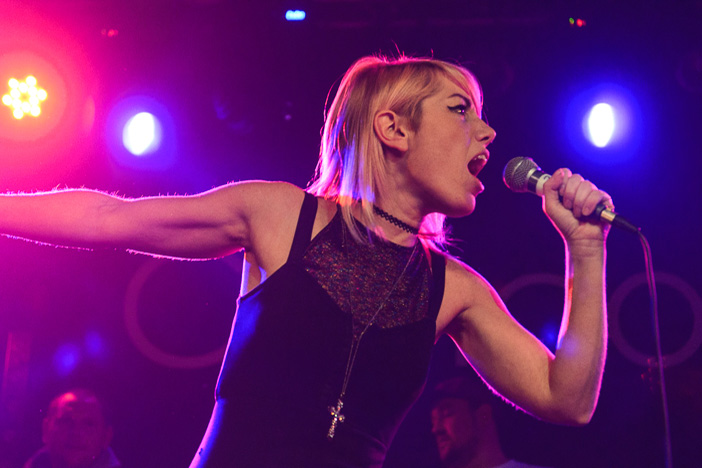 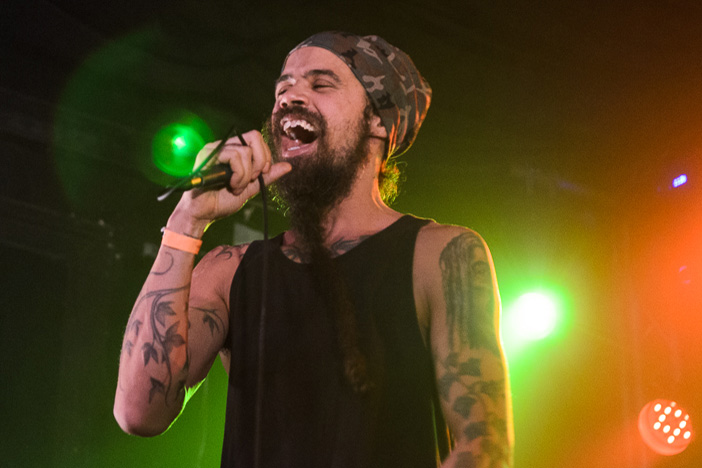 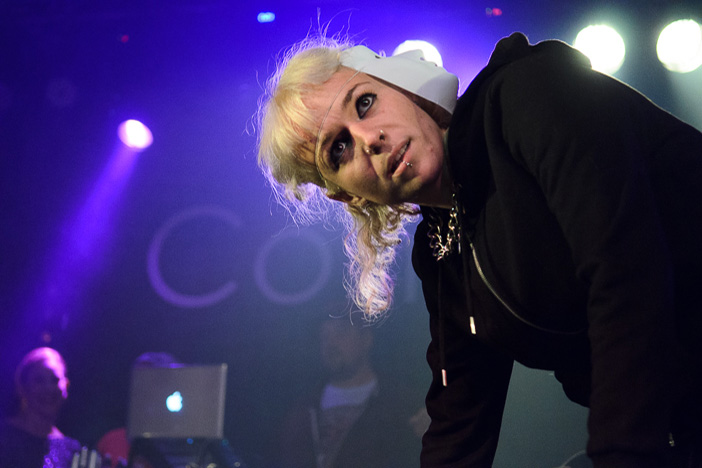 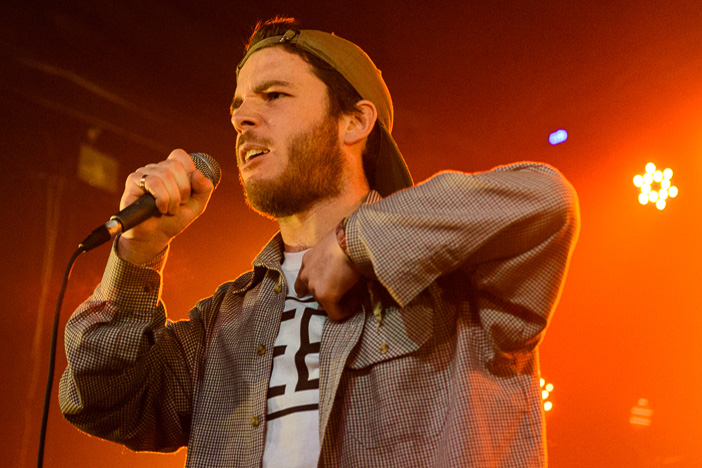 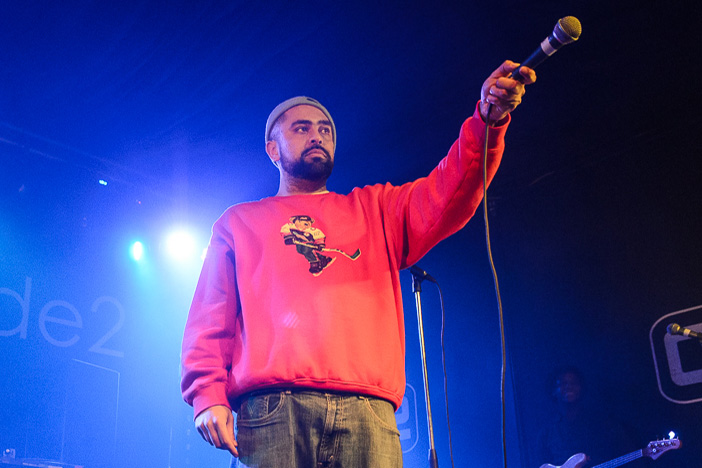 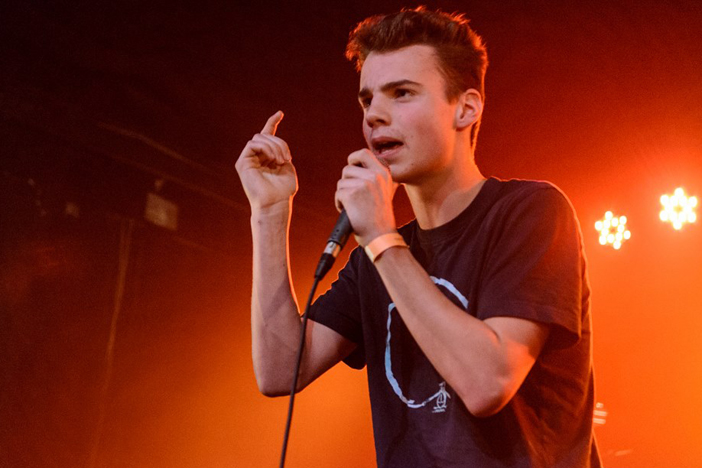 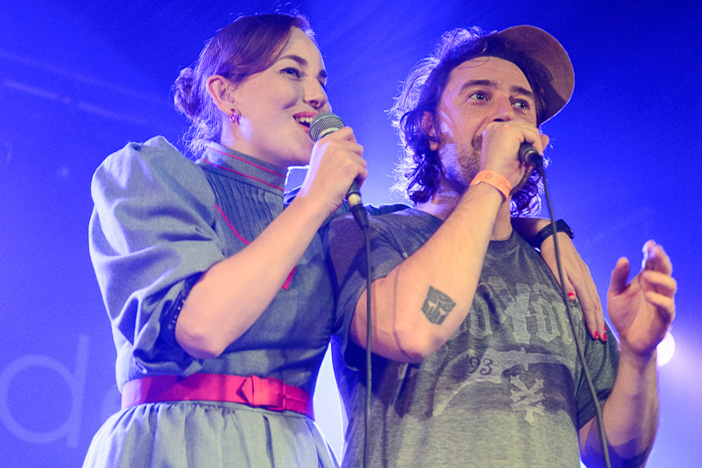 Now in its 14th year, the annual Poets Vs MCs spoken word battle seems to be following the format of modern TV shows in which long story arcs take the place of self-contained standalone episodes. The ongoing spats and callbacks reward dedicated audiences, while the sheer skill of the performers ensures that newcomers are never left out in the cold. When we’re asked if anyone is here for the first time, half of the crowd starts cheering.

We see plenty of new faces on stage tonight as well, but the ringmasters remain the same. SlipJam’s Tom Hines is energetic and forthright as ever, playing the naughty schoolboy to Rosy Carrick’s stern and sometimes saucy headmistress (a role reinforced by the news that she finished her PHD earlier in the day). While Hines is more of a mascot for the MCs, Dr Carrick leads Team Poetry in the first round with a piece that’s understated and sensitive and thus entirely misleading as to what’s likely to come later.

The MCs have always made a point of showcasing young performers and Phonetic is first out of the box. She’s backed by a trio of musicians from Normanton Street whose slick grooves give her impassioned rhymes a big boost. The band remains on stage for the rest of the round, providing semi-improvised backing for poets and rappers alike. Despite the spoken word remit it’s a novel addition to the night and sometimes comes off brilliantly (usually, but not always, in the MCs’ favour). 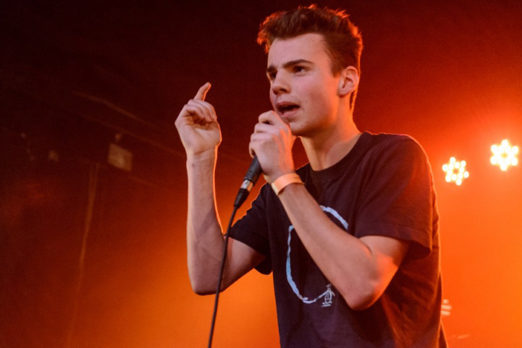 It’s also nice to see a new performer on the poet’s side. Rachel Shorer envisages a video game about walking home after a one night stand, each level bringing a new layer of unsavoury detail and corresponding laughter. The rappers respond with what turns out to be one of the stars of the show. “Hello. I’m a fourteen-year-old rapper,” says EbenFlo. Given his age, the audience is already on his side before they realise what he’s capable of. He does one of his songs with the house band and displays a sense of purpose that seems inexplicable in someone so young. It’s even more extraordinary when we’re reminded that he’s as old as the event itself. 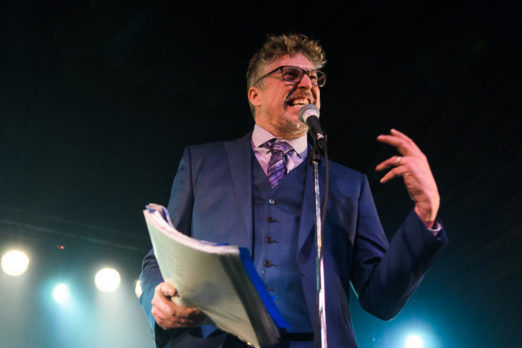 A little later we find ourselves confronted by a raving Tory, daring the audience to lick his shoes. Dressed for the occasion in a true blue suit, poet Mike Parker plays the part with uncanny conviction. The rightwing ‘trickle down’ theory is played for laughs and ultimately equated with pissing on the poor. “Even if you don’t understand the economics, at least you can appreciate the poetry.” It’s a brilliant spoof that seems to unite both camps in their contempt for the Tories. After the interval we’re into the cypher – an open mic section of the show for rappers to brandish their freestyle skills. There’s a stage invasion of young MCs, many of whom are here as a result of Hines’ AudioActive youth workshops. “I foolishly agreed to chaperone a dozen teenagers tonight,” he explains, before Dr Carrick dubs him the ‘Fagan of Brighton’. The truth the behind the earlier political parody is brought home when Hines points out how much the Government’s cuts have affected youth services. It’s a big shame, especially after seeing so many talented kids getting involved tonight.

Next up is the notorious battle round. In a bid to keep things fresh the first four performers are set various challenges. Robin Lawley’s long preamble and leisurely pace make him an amusing candidate for the ‘speed writing’ contest, and though his verse lacks the elasticity to include all the audience suggestions he’s given, it’s hilarious nonetheless.

It’s also funny to see EbenFlo return to the stage and attempt to take down someone three times his age. Like Robin, he’s been tasked with using the word ‘clitoris’ (blame the front row). He admits to not knowing much about it and is forced to pause mid-sentence for the laughter to subside, before continuing with a neat line about how his school’s sex education has let him down. 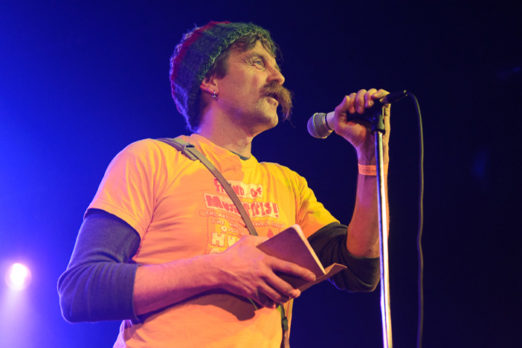 The next challenge explores romantic relationships between poets and MCs, and coincidentally features two of tonight’s silliest stage names. Due to a mix-up Spliff Richards’ love letter to a poet doesn’t make much sense once Johnny Fluffypunk has already told his tale of a partner who can’t stop rapping (even in bed).

Things start getting personal when Dr Carrick steps up to put down the rapper who took her apart last year. Her poem is a full-on counterattack on Gramski which attempts to call him out as a misogynist – and references a recent Brighton Source interview in which the rapper claimed such accusations were preposterous. 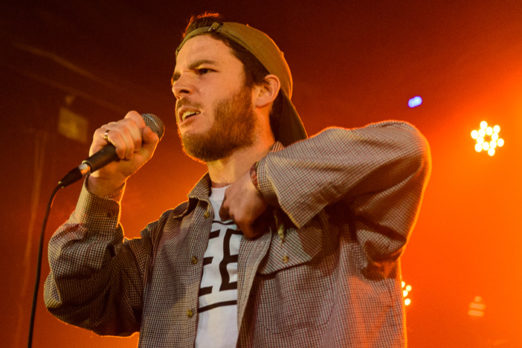 Similarly, a poem from last year which mocked rappers for liking guns is taken to task by Slam the Poet (who is, confusingly, an MC). Though Chris Parkinson’s 2016 piece was a fanciful riff on rapper stereotypes, Slam’s response argues that the aggressive and violent side of hip hop is a product of an environment in which people are powerless. He has a point – despite the fact there aren’t many ghettos in Brighton – but it makes for a jarring contrast with what was intended as a flippant piece of comedy. Especially as Chris’ subsequent riposte essentially carries on in the same manner. 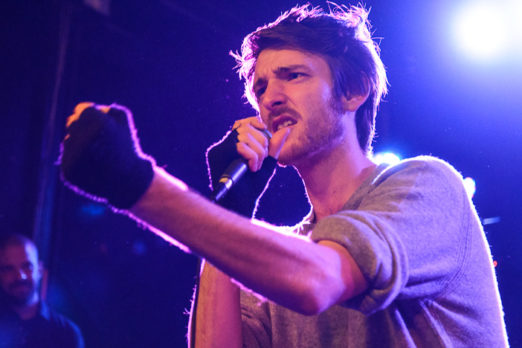 Gramski comes on soon after to taunt his taunter and delivers a frantic rap using opera melodies, cramming syllables into insane phrasings. It’s dense and impressively executed, but only those whose ears are attuned to the rapid-fire rhymes of hip hop can hope to catch it all. Even so, it’s a fine send off for Brighton’s ‘king of freestyle’ who previously said this was to be his final appearance at the event. Dr Carrick marks the occasion by gobbing at him across the stage (we’re not sure if it’s a sign of punky disdain or showbiz high jinks). She apologies for doing so, but it gives Gramski the perfect opportunity to bow out gracefully. 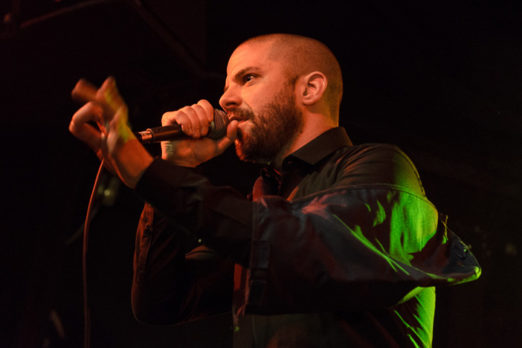 The battle round ends in the same way as the first, with a bizarre bilingual rap duet from Collette and Jon Clark. It’s a punchy performance but due to large chunks of the vocals being in Spanish we’re left none the wiser. As such it effectively serves as a rousing musical finale to the show.

We feel the teams tonight have been equally matched, with standout pieces coming from both sides. Traditionally the battle has been concluded with an audience vote, but we’re disappointed to find the result is left hanging once again. Having watched some amazing performers take each other apart, we can’t be the only ones longing for a cathartic cheer to settle the matter.

Luckily we won’t have to wait another year. Brighton’s best wordsmiths are taking on Bristol this summer and given the bonds between the two cities it should be a special sort of showdown – if only because the poets and MCs will have to work together. 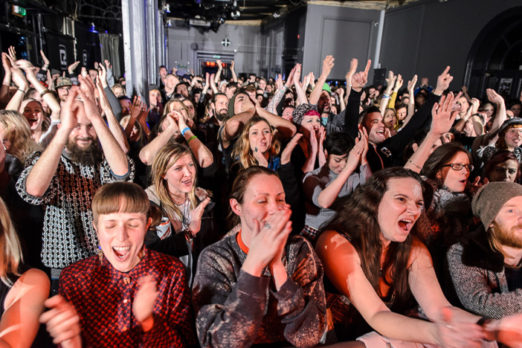 Ben Bailey is the editor of Brighton Source and a freelance writer. He also plays in a few bands and can sometimes be found giving talks on a variety of niche topics. He lives in Brighton and rather likes it.
← PREVIOUS POST
Novella, Sat 25th Feb
NEXT POST →
New Poetry Book, 'Drunk With A Pen'
Mailing List
Recent Posts
Website developed in Brighton by Infobo
Copyright © Brighton Source 2009-2021
Poets Vs MCs 2017 Review - Brighton Source