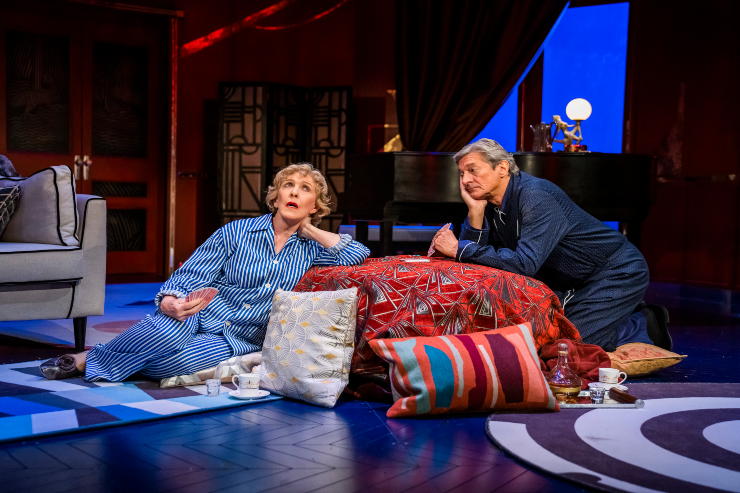 A cycle of jabs and jibes spins amidst bow ties and glittered trims at the Theatre Royal this week, with vicious quips spat across cocktails and card games as Noël Coward’s crisp and charismatic comedy honeymoons in Brighton.

After the past two years we have all had it might seem easy to envy old flames Amanda and Elyot. A holiday abroad, upcoming social occasions in the calendar and even a balcony to themselves. Although it is not to themselves alone, of course, as they have both traveled to this honeymoon destination of Deauville with their new partners… On separate honeymoons. Thrust once more into each other’s company, old passions resurface and the two embark on a romp of remembrance, throwing caution to the wind for the sake of nostalgia and reminiscence. But can this flame be rekindled, or should the past be left to lie?

A second stab at happiness, or the pretense of it, sits at the heart of Private Lives. Amanda and Elyot’s urge to repeat the past, or at least recreate it with the “maturity” of the present, is Gatsby-esque in its hubris and seemingly doomed as the inevitable mind games set in and a mirthless cat-and-mouse ensues with the merry war betwixt them steadily shedding its merriment. It is much ado about nothing as, of course, these are not real problems but, for just under two hours, it is fun to pretend they are.

Coward’s writing is immensely enjoyable to listen to – with blink-and-you’ll-miss-them witticisms instilled within every line – and productions of his work often fail to justify their place on stage rather than radio. But Christopher Luscombe’s production employs an overt physicality throughout as Amanda and Elyot hurtle themselves into and away from situations of their own making, running into each other’s arms only to repel each other later on. Their desire is never trivialized nor their love belittled in a production that bases its flippancy within sincerity. Nostalgia preys upon us all and an age-aware crisis may take place at any point in life – whilst we may laugh at the results, we must not dismiss the sentiments that lie beneath them.

Simon Higlett’s design expertly reflects this with the opening act taking place on stark white, European balconies. The freshness of the front, mixed with the sea breeze, heralds new adventures and a clean slate. The location shifts and a luxurious and boldly decorated flat follows on, over-compensating in its brash assuredness (complete with grand piano and city view) but as the action unfolds we begin to notice the cracks and chips upon its walls, painted a deep rose-tinted red.

Nigel Havers is excellent in the role of Elyot and clearly has a lot of fun with Coward’s meta-theatricality, just about shying away from winking at the audience after every line. But it is Patricia Hodge as Amanda who steals the show. It is as if the role was written for her. Each quip drips with pointed menace or targeted charm, each gesture is marked and every beat apparent in a performance that should be lauded for its implausibly violent subtlety. Praise has also to be given to both Natalie Walter and Dugald Bruce-Lockhart as the unfortunate other halves, equal parts stoic and laughable in their attempts to recapture what has been lost.

Private Lives is Coward at his best and this production makes that apparent. As fierce as it is flippant and elevated by fantastic performances, this is an evening that can be looked back upon with fondness, the memory of which justifies its rosy tint.

Brighton-based actor and playwright. Spurs fan, loves a good series and is generally poor at bios.
← PREVIOUS POST
Platform B stage at The Great Escape
NEXT POST →
Skunk Anansie Review