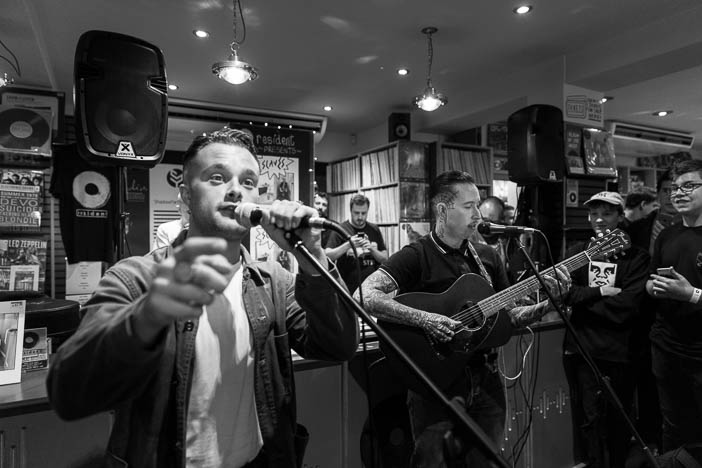 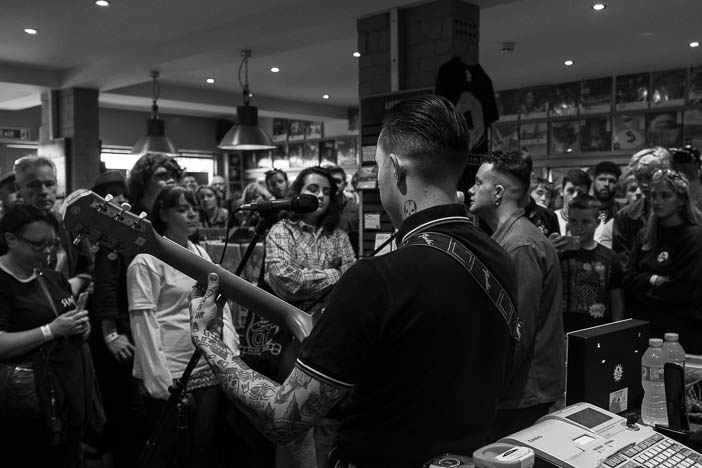 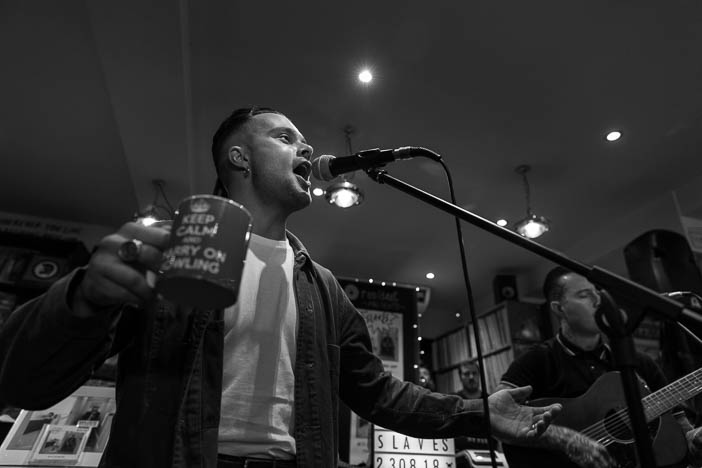 Sublime acoustic performances don’t readily leap to mind as a speciality of Slaves, the morbid Kent punks whose tours encompass buckets of sweat, trashed drumkits and crowds seemingly propelled to user-test the structural solidity of their surroundings.

Without wishing to cast doubt upon the quieter subtleties Laurie Vincent and Isaac Holman can summon, a pair known for snarling and pummelling their way through nihilistic odes to angry rebellion seem unlikely emissaries of unplugged tenderness.

Here, though, they forego their drums, amps and battering ram bluntness. It’s a rare tone switch which takes on a distinct irony when they play snotty single ‘Chokehold’, the video for which features a parade of drummers ranging from Blur’s Dave Rowntree to Hinds’ Amber Grimbergen.

With the minor exception of someone at the back stumbling from their perch midway through, this lunchtime instore – hosted with typical charm by Resident, whose set-up could make even the drabbest of displays feel special – never hints at the riotous melee Slaves usually provoke. Instead, they replace their combative percussion with beatboxing and offer biscuits around, checking their own appetite when they remember a TV appearance scheduled for the weekend.

In some ways, the more subdued effect could be construed as a nod to the more grown-up moments on new album ‘Acts Of Fear And Love’, a return to the short, sharp and brash wit of their first album, 2015’s ‘Are You Satisfied?’

‘Daddy’, a new song about a midlife crisis that plaintively rues lost times, instantly lends itself to an acoustic outing. The title track of their debut, meanwhile, becomes a near-wailed sea shanty, landing like a sozzled, melancholic lament.

Pleasingly for a band who created an anthem around manta rays, their sardonic, modern-life-is-rubbish take still finds space for obscure subject matter. “Did you know that 65 percent of UK homes contain at least one magnolia wall?”, asks Holman, opening with an air of unimpressed menace at everyday mundanity, before deriding his smartphone as a “tap and swipe crackpipe”.

It’s low-hanging introspection from Holman, whose frequent shouty moments on record closely emulate The Prodigy’s Keith Flint, and it expands to the trappings of fame on ‘Photo Opportunity’, in which the idea of saying no to fans ushers in thoughts of deep scrutiny (“no-one wants that”).

In the right place, though, the attention is still welcome: afterwards, most of Slaves’ vinyl-clutching listeners line the shop in the hope of a snap and two signatures – and, if they’re lucky, a biscuit.