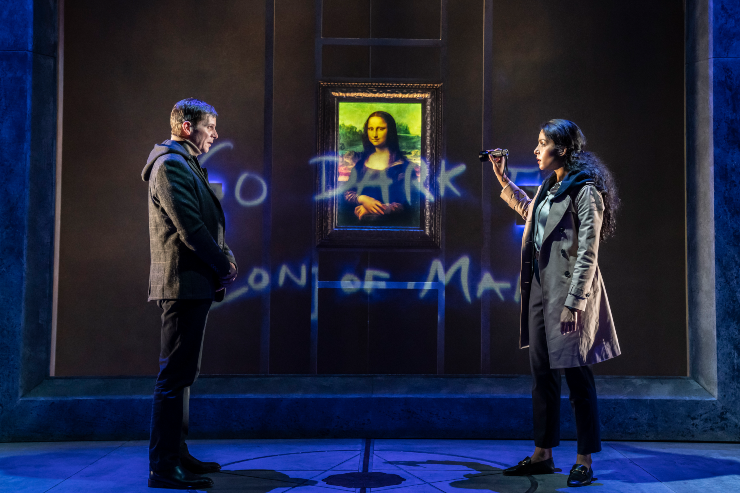 Cryptography and criminality take to the stage in this adaptation of Dan Brown’s best-selling novel, The Da Vinci Code. Part espionage-thriller and part tomb-raiding adventure this cryptic caper visits the Theatre Royal Brighton this week as part of a nationwide tour. And from the off, all is not what it seems…

On a dark night in Paris, symbologist Robert Langdon is summoned to a crime scene within the depths of the Louvre. Museum curator Jacques Saunière has been murdered but in his dying moments has managed to leave a cryptic message about the killer’s identity as well as of a fateful secret that he, and others like him, have made it their lives’ work to keep. A secret that has passed through a select and chosen few, from generation to generation throughout history and one that, if revealed, would rewrite the history books and, in doing so, shake the very pillars of civilisation.

This production of The Da Vinci Code, having to cram 400-plus pages of action and more plot twists than an Agatha Christie omnibus into a two-hour stage show, zips along at a dizzying pace. It can’t be said that as the drama unfolds the action ever falls flat but this surging tempo does render some of the novels subtleties caricaturesque in places. David Woodhead’s sparse, minimalist set makes great use of projection and physical design elements to allow for the immense amount of location-hopping that takes place throughout – first The Louvre then a bank vault, a manor house, an airplane, an abbey. In order to keep the through-line from splintering off into too many tangents Luke Sheppard’s production employs a choral ensemble to great effect. With hoods up they lurk at the sides of the stage, a murky order that lingers in the shadows always observing, anticipating and informing the action as and when required. Both their presence and also their absence adds a fresh dynamic to each scene as conversations are overheard and relationships questioned. They step into the action for movement sequences, to provide ensemble vocals and sometimes as phantoms participating in a myriad of flashbacks which the show leans on to unpick the narrative.

Nigel Harman makes for a charismatic and likeable Robert Langdon but it is Hannah Rose Caton as Sophie Neveu who the audience really warms to. Together they make an affable team as they decipher and deconstruct sequence after sequence of numbers, letters, names and events. Danny John-Jules provides the show’s main source of light relief as eccentric savant Sir Leigh Teabing. His rapid-fire idiosyncrasy and genial witticisms prevent the show from getting bogged down in its own riddles and lost within a maze of its own making. “The most heavy-handed pilot since Pontius” he quips about the person at the helm of his private jet to an audience that welcomes a quick gasp at the surface before inevitably having to be plunged back into the thick of mysteries and enigmas.

This adaptation, arranged by Rachel Wagstaff and Duncan Abel, is as cohesive as can be expected for such an ambitious undertaking and overall the show is a night of entertaining intrigue for audiences both familiar with and strangers to the novel. Slightly encumbered within its own dense narrative and intermittently ensnared within its own twists, it nevertheless brings an immersive story from page to stage in a form that has some occasional brilliance at its heart, even if it takes a bit of deciphering to get to it.