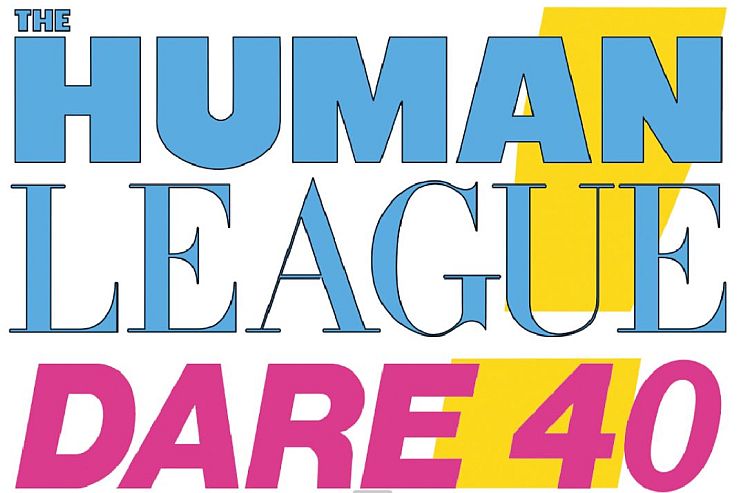 Could there be a more 1980s line-up than Human League, supported by Tom Bailey of The Thompson Twins and Clare Grogan’s Altered Images? Plus, given the threat of the new COVID variant, could this be the last chance to dance before another lockdown?

With the audience well and truly warmed up by two excellent support acts Dvorak’s dramatic ‘Allegro Con Fuoco’ blared out and the stage curtain dropped to reveal Joanne and Susan on the first tier of the MC Escher-style staircase set with Phil Oakey on the top level, looking like a cross between Neo from The Matrix and David Carradine’s Kung Fu character.

The three-piece band of two synths and a drummer began ‘Mirror Man’ and everyone was out of their seats to dance. The girls’ voices were a tad off-key for the introduction harmonies but Oakey’s voice was as strong and distinctive as it ever was. Joanne and Susan’s vocals improved greatly for ‘Tell Me When’, the newest song in the set taken from 1995’s ‘Octopus’ album, with Phil singing and running the length of the stage while Tron-style graphics were screened behind. Afterwards Phil said “Thanks folks, we’re The Human League” and they continued with ‘(Keep Feeling) Fascination’ and ‘Heart Like A Wheel’, with the synth players joining the singers on keytars.

A rapid bassline introduced ‘The Lebanon’ and the first costume change, with Phil sporting a cut off T-shirt and braces, again covering every inch of the stage as a scorching guitar riff played. Phil then disappeared leaving Susan to bemoan being stuck in the hotel, unable to go shopping but thanking everyone for coming out given the current situation. She took the lead vocal on ‘One Man In My Heart’ before Phil returned in a formal grey suit to end the first part of the show with ‘Human’ which saw the three vocalists coming together as one on this beautiful Jam and Lewis composition. The band continued as Phil, Joanne and Susan left to change into matching black outfits with Phil returning to introduce ‘Dare’ as “some songs we recorded some time ago”.

For people of a certain age, ‘Dare’ soundtracked an entire decade and has stayed with them throughout their lifetime, as evidenced by many of the older crowd members singing along to every word. For some the running order is hardwired into their brains with a cheer going up almost before the first note of each song is played.

Side one, track one is ‘The Things That Dreams Are Made Of which’ sounded as fresh as it did forty years ago. The opening line of ‘Open Your Heart’ is sung by the crowd in unison and the self-motivational lyrics stand the test of time. ‘The Sound Of The Crowd’ is a club classic and there is an arena-wide orgasmic shout after each chorus. ‘Darkness’ remains as foreboding as ever, its sparse arrangement giving it a sinister sound, then it’s back to the dancefloor for ‘Do Or Die’ with Phil straining out every line. The singers left the stage again but Susan can be seen dancing offstage as the band continued.

There’s a short version of the ‘Get Carter’ instrumental, with Phil observing from the top of the set, which segues into ‘I Am The Law’ with Phil in silhouette, singing over the doom-laden bassline. For ‘Seconds’, Phil is bathed in red with a Roman numeral clock vortex image behind him while digital timers count down over the rest of the stage. Susan and Joanne return for a pitch-perfect ‘Love Action’ and the set ends with what is now a Christmas party monster, but sounded great in its original context as the album closer.

It was back to the beginning for an encore of 1978’s ‘Being Boiled’, with suitably industrial graphics of furnaces and ironworks and the show ended with the celebratory Oakey/Moroder collaboration ‘Together In Electric Dreams’ – a perfect choice to close what could be many people’s last concert for some time given the amount of cancelled and rescheduled events.

The supports had limited time so there was no room to mess around with new material. Both are headline acts in their own right so have the overflowing back catalogues to fill their short sets with hits, including a few classics and a cover from each.

Clare Grogan was a post-punk pin-up girl for many and looked stunning in a red sequin outfit, expressing her amazement that the show was allowed to go ahead. All the hits were present and performed to perfection, plus a bouncy version of The Ting Tings’ ‘That’s Not My Name’. The short but sweet set included the punky ‘Dead Pop Stars’, dedicated to Grogan’s hero Siouxsie Sioux and ended with a very dancey ‘Don’t Talk To Me About Love’ and, of course, ‘Happy Birthday’.

Tom Bailey, frontman of The Thompson Twins was also allowed eight songs which included an authentic take on Talking Heads’ ‘Psycho Killer’. Bailey and his all-female band, including a last-minute replacement on bass, were dressed completely in white to match the fluorescent tube lighting. Switching between guitar, keyboard, percussion and harmonica Bailey reminded us of how many classic 80s pop hits the three-piece were responsible for. ‘Love On Your Side’ and ‘You Take Me Up’ had the crowd dancing and singing along and this continued through to ‘Doctor! Doctor”‘ and closing number ‘Hold Me Now’, complete with disco glitterball which saw the audience singing the final chorus as Bailey gathered his superb band centre-stage for a final bow.

This amazing line-up was the perfect distraction from the pandemic and you could see how much it meant to performers and attendees alike. Proof positive that music is a great comforter with everyone partying to leave this awful year on a joyful high.