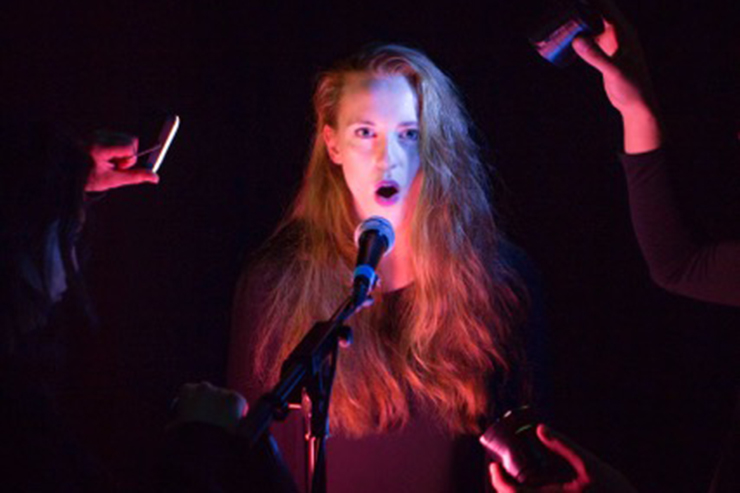 This is not a review of ‘The Last Rehearsal.’ That’s because, unfortunately, the director backed out at the last minute.

The four actors were faced with either losing their deposit on the venue or performing a play that was under-rehearsed. A row broke out between them: whose fault was this? Reluctantly, they decided to carry on. Yeah, really?

In fact, Last Company’s latest play takes on the premise of ‘the director who resigned’ theme to deconstruct and make fun of the theatre genre. So the four-strong Latino and European cast bicker amongst themselves. “We’re Latinos they’ll never give us the deposit back.” One woman starts to critique the other’s acting: do the eye contact and make it realistic! Another wants more music. But what about the meaning: it must be transcendental! Crap, says the fourth actor, we just need more lights!

As we move on, the doubts go deeper. Why are people coming to see these shows anyway? Think of all those miles travelling so you can sit in a dark space. They should be enjoying life down on the beach! Let’s burn down the theatres! Hey, hang on, that sounds like fascism.

There are more immediate problems looming: how should they end the play? What about a deeply moving poem by, say, a Chilean writer like Alejandro Zambra, and spoken in Spanish? You must be joking. The Brits won’t take it! No, no, nada!

‘Last Rehearsal’ was written and directed by UK-based Chilean playwright-director, María José Andrade. It was performed by Last Company which aims to develop closer links between Latin American and British theatre, and produced by Lewes-based Deirdre Daly.

At times the (English) dialogue over-explained while the stage direction could have been tighter. Maybe, it needed a bit more directing here and there… but hey no, let’s not go there!

The kids may not like it but this was seriously cheeky and subversively funny. We’re looking forward to more on these themes from Last Company.

Mike lives in Brighton. This is a full time occupation. He's also a researcher, writer and activist. Any time left over he spends hanging around cafes and pubs listening to people on their phones. He loves theatre that pokes into difficult places. You won't find him on Facebook.
← PREVIOUS POST
35 120 Photowalk
NEXT POST →
As A Tiger In The Jungle Review