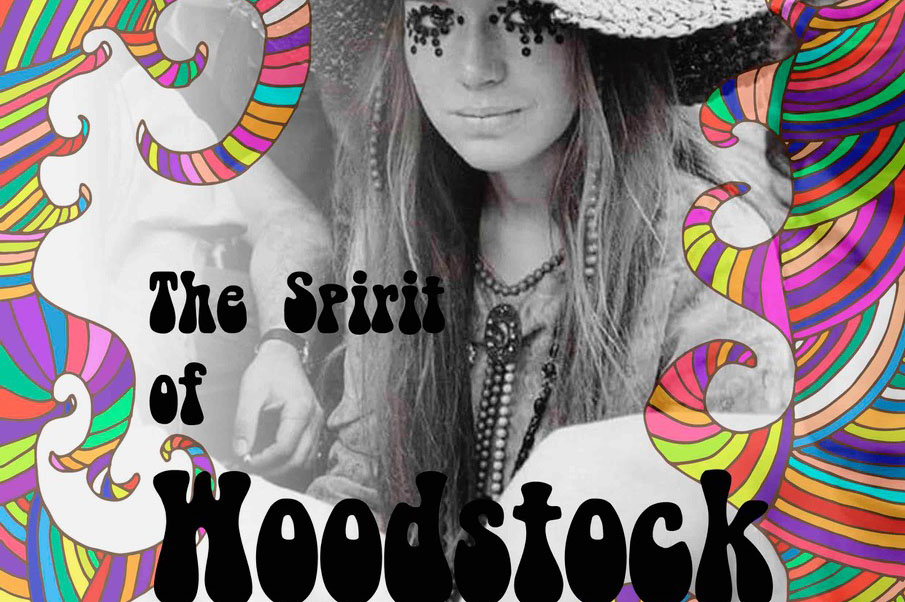 The Spirit of Woodstock Review

It’s not exactly Jasgur’s farm. But this assemblage of sounds, peace, love and a tab of acid kicks us right back into a decade of turmoil. Jonathan Brown’s one-person outdoor show captures the frenzy of that era as he plays over 70 characters in a two-act play that ends at dusk.

The performance starts with the build-up to the Woodstock Festival in Bethel, New York in August 1969. It follows this rock pilgrimage to Jasgur’s farm: the joy, the drugs, the rain, the mud, the overflowing toilets. And the police helicopters forever overhead. It is perhaps both the climax and conclusion of the 60s in popular memory. Goodbye Ruby Tuesday.

The festival is the backdrop to a whirling tour of the 60s that splices together assassinations of Martin Luther King (shot), Malcolm X (shot), JF Kennedy (shot) and Vietnam (bombed). There is Cuba, a near-miss nuclear launch and adverts for Ajax that precede a moon landing (one giant leap). The ignition sequence for Apollo 11 had started (three, two, one…). But bodybags from Vietnam were still being unloaded (one, two, three…).

This is a massive theatrical achievement. Anyone that can shift roles every two minutes, with a script as thick as a dictionary, on stage for over two and a half hours, outdoors, and managing all the sound and props deserves some kind of award! 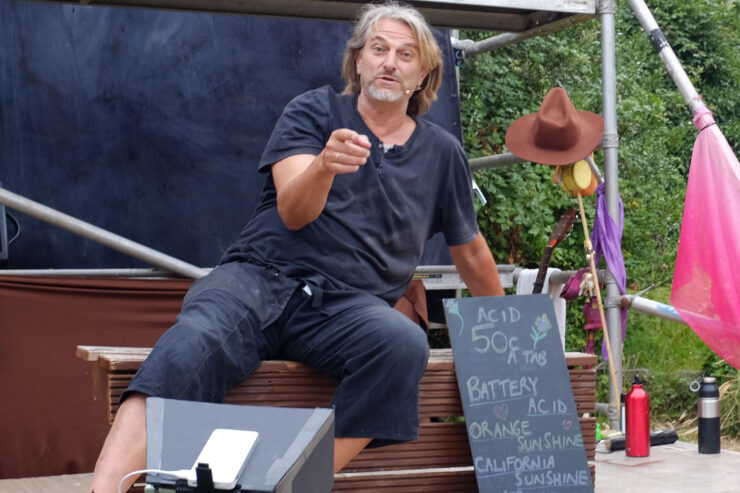 ‘Woodstock’ is bricolage with direction. There’s an inter-splicing of verbatim clips from recorded speeches added to the spoken testimony from other witnesses. The US accent is easily convincing enough for the Brits in the audience. There’s a box of props leaned against the steel poles of the rigging for the stage where bands will play and politicians will rant.

There’s plenty of engagement: the audience get a chance to buzz round the park and flip their hands like police helicopters. We can applaud the acts – as if we too are at Jasgur’s farm waiting to form a rock’n’roll band. And those cute announcements “someone’s lost their bracelet” and “can Candy come to the noticeboard” add to the scene.

It would be easy in any show about a 60s music festival to cram in too many famous songs from the era. This play avoids that trap: it’s neither a tribute act nor a nostalgic trip. But there’s enough sampling from judicious clips to give us the feel. “Ravi Shankar played right through the rain,” says one festival goer. “Where’s my tab?” says another.

Something Underground Theatre Company, formed by Jonathan Brown in 2006, have a track record of encouraging, teaching and performing the art of one-person shows in both Lewes and London.

While Woodstock in the 60s brought together almost half a million people on Jasgur’s farm, current Covid restrictions mean that the audiences at St Ann’s Well Gardens have to be neatly socially distanced, with cones marking specific areas for each group. And it’s advance booking only.

Jonathan could perhaps find a mate to give him a break from managing the sound and all the props too. But Spirit of Woodstock is a massive theatrical achievement. And the depiction of Jimi Hendrix’s tortured version of ‘A Star Spangled Banner’ provided an extraordinary catharsis.

Mike lives in Brighton. This is a full time occupation. He's also a researcher, writer and activist. Any time left over he spends hanging around cafes and pubs listening to people on their phones. He loves theatre that pokes into difficult places. You won't find him on Facebook.
← PREVIOUS POST
Brighton Music Conference 2020
NEXT POST →
Much Ado About Falstaff Review
Mailing List
Recent Posts
Website developed in Brighton by Infobo
Copyright © Brighton Source 2009-2021
The Spirit of Woodstock Review - Brighton Source