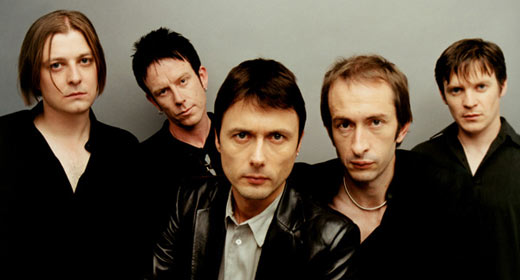 For what must be the first time in their eight-year career, they seem ill-at-ease, self-conscious, scared even. Singer Brett Anderson’s usual effete, casually confrontational confidence is replaced by uneasy morale-boosting – his constant shouts of “you laav it!” seem more ego-massage than simple statement of fact, and the band appear reluctant to step out of the shadows.

Fair enough, this is the first date of the tour, but one would expect a band of Suede’s experience to be able to keep the jitters at bay. Almost every song is burdened with an overlong intro, Brett milking the anticipation for all it’s worth. While this effect is fantastic for the squealing strings of ‘She’, even guitarist Richard Oakes seems to find the never-ending a capella finale of ‘She’s In Fashion’ a little tiresome.

The overwhelming impression is akin to despondent footballers kicking the ball into the crowd after conceding a goal: Suede seem to be time-wasting, unconvinced of the power of their back catalogue (which is ridiculous, given the grinning, pogoing response to highlights ‘Metal Mickey’ and ‘Animal Nitrate’ and the teary reverence rightfully bestowed on ‘The Wild Ones’).

There are moments of sunshine, namely the rapturous ‘Beautiful Ones’ and the weird, knowingly atypical electro-funk of ‘Savoir Faire’. Encore finale ‘Saturday Night’ elicits much swaying and hugging, but Brett’s perverse insistence on trying to make horribly inappropriate falsetto lines into terrace singalongs does nothing but grate.

Suede are undoubtedly one of the finest bands of the ’90s, having lasted this long without encouraging unsubtle, lowest-common-denominator Blur/Oasis pub chants, but when a band seems both reluctant to admit its own past glories and unsure that their new material stands up in comparison, even devotees can be forgiven for questioning their unwavering allegiance.

Suede are in danger of following the Manics down the over-trodden path of compromise. So now they can write huge crowd-friendly choruses like the triumphant ‘Electricity’, but the soul, the “Yes! We MEAN something!” has got lost in the wash. It’s never easy to respect a band who no longer respect themselves.

Sometimes an article is a bit of a team effort, and those are tagged SOURCE Writers. If you’d like to be part of that team, hit the Contact link at the top and get your work on this website.
← PREVIOUS POST
Steve-O Competition
NEXT POST →
Review: Emmy The Great
Mailing List
Recent Posts
Website developed in Brighton by Infobo
Copyright © Brighton Source 2009-2021
Vintage Review: Suede in 1999 - Brighton Source