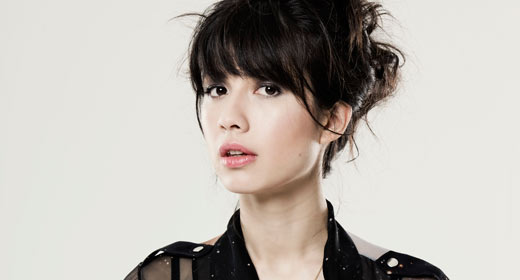 Liverpudlian female three-piece Stealing Sheep have been touted by some as the, yawn, Next Big Thing. Really? If three giggling girls dispatching hazy, sixties-warped mantras while wearing their Nan’s seventies curtains turns out to be the future of music, then Shed Seven will have the Christmas number one, Morrissey will sing the jingle for a KFC ad and George Osborne will cease to be a smug prick. Like that last jibe, Stealing Sheep are very sixth form. Emmy The Great, on the other hand, is wise beyond her years. Lyrically sharp and musically cute, she has the one thing that can’t be taught; authenticity.

Strolling on to the stage in a glittering silver dress half-covered with a battered denim jacket, she launches straight into ‘Eastern Maria’. As ever her stark, unmistakable voice is imperfect, but that merely adds to the charm. Joined by her five piece band, she weirdly devotes ‘We Almost Had A Baby’ – complete with the line “You didn’t stop, when I told you to stop” – to her heavily pregnant friend, before ‘Dinosaur Sex’ perfectly embodies the transformation from the DIY folk-ethic of debut album ‘First Love’ to the more expansive textures of follow-up ‘Virtue’.

Here, long-time collaborator Euan Hinshelwood’s distorted guitar just about refrains from going off at a tangent, while the greater sound complexity is enhanced with some dense, dark drums and underlying keys. Midway through the set, after ‘MIA’ – a fantastically catchy tune juxtaposed with lyrics about a fatal car crash – the soothing sing-along ‘Cassandra’ and the breathless, propelling ‘Paper Forest (In The Afterglow of Rapture)’, it hits home that that her output is consistently impressive.

The set is topped off with ‘Trellick Towers’, which was written after her partner had a religious conversion and left her for the church. Accompanied by only bass and keys, you’d have to be dead inside not to be moved by both the intensity of the performance and lines like, “Something holy used to touch me, then he heard the voice I couldn’t hear/He’s gone to where it sent him, and now I’m praying for this pain to clear.”

After taking a few requests, the encore is wrapped-up with a frantic version of ‘Edward is Dedward’.

“This was the best gig of the tour,” she beamed. “I’d been really worried – my bloody mum is here and everything.”
Worried? She really didn’t look it. And, more to the point, she really, really didn’t need to be.

Sometimes an article is a bit of a team effort, and those are tagged SOURCE Writers. If you’d like to be part of that team, hit the Contact link at the top and get your work on this website.
← PREVIOUS POST
Vintage Review: Suede in 1999
NEXT POST →
October 2011 Issue
Mailing List
Recent Posts
Website developed in Brighton by Infobo
Copyright © Brighton Source 2009-2020
Review: Emmy The Great - Brighton Source