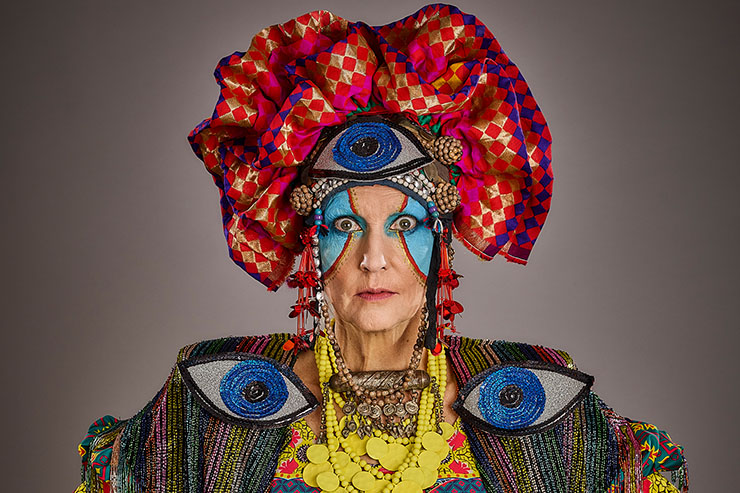 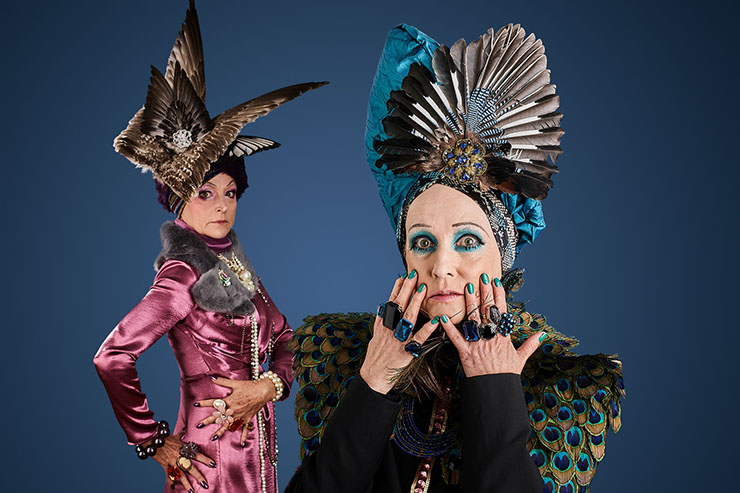 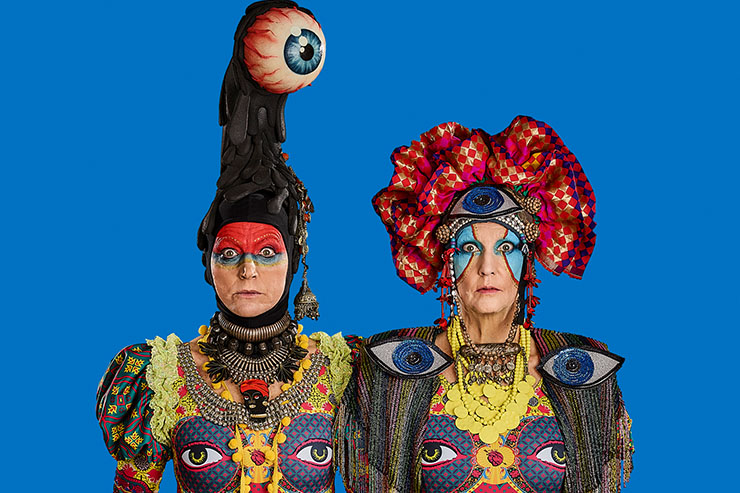 Take some well-dressed kids lost in the woods. Make them look as sweet and innocent as candy. Find a crone who lives in a cottage in the forest and wears a witch’s hat. Arrange a full moon, play spooky music. Sounds familiar?

In Witch Hunt, directed by Cal McCrystal, that classic scenario served as a jumping off point for a rollicking performance – just before International Women’s Day – in front of a full house at TOM. Abigail Dooley and Emma Edwards have sewn together the archetypal icons associated with witches and fairy stories to make this a hilarious, risqué and at times, raunchy show. It also managed to stick up a serious finger to contemporary social injustices.

Witches have had a bad press. For over three centuries women were persecuted and burned to death for ‘witchcraft’. And a witch hunt today on social media is no picnic in the forest. This show dug into traditional and contemporary meanings of the term through humour and horror.

Early on we got to see the spindly finger nails of witches wearing false teeth as long as their arms. Whatever you do, don’t drop your teeth! Oh whoops, there they go!

“We shall tell tales of witchcraft and torture!” say our characters as they stand alongside crazy life-sized puppets. But nowadays, they ask, have we lost our skills in storytelling? By the end we are getting serious about contemporary themes with less obvious attachment to the hex: temperatures rising, seas overflowing and the angst that pours from faces on our screens. “The world is chaotic” so “can we re-write history into herstory?”

There are scenes with fake boobs and bollocks as big as your head. The man in the front row of the audience had both of them shoved into his face to gleeful applause. Does size matter? He was enjoying it and the audience screamed approval at the grotesque sight.

The show draws from slapstick, pantomime, the absurd, and at times, from traditions of stand-up and political satire. The audience laughed full steam, but once or twice the pace sagged. Did we occasionally need more balance between the hilarious and the serious? A sudden stillness or a lament? We certainly got a punch in the face with the box where witches were smoked to death. Half a million women burned to ash. That puts coronavirus into perspective.

Witch Hunt has attitude. It would kick ass from Brighton to Edinburgh. Meanwhile, catch it on the southern tour anywhere between Shrewsbury and Gravesend.

Mind the woods on your way back!

It is certainly value for money at TOM these days with the support act to Witch Hunt, the Pushkinettes, giving us a taster from their performance of Anna KareniNa Na Na.

This show was a cool way to whack through the great 872 page Russian novel. Or was it 943 pages? The actors started to argue immediately and, anyway, “who is going to play Anna?” As for the plot, you know what it’s like. At the moment the wedding is done and dusted it turns out that the groom has fallen for the cute new woman on the block. That’s pretty vexing.

This is a real gem. There are purple tears and red hearts set on a black stage. Russian laments are played on a four-string toy guitar. Julia Masli, Tatiana Collet Apraxine and Julie Nesher are the actors, musicians and disrupters in this dynamic mash-up of clowning, dance and storytelling. It’s serious, sad, and sometimes plain silly. Catch their full version at this year’s Brighton Fringe (Spiegeltent: Boscoe 15-16th May).

Mike lives in Brighton. This is a full time occupation. He's also a researcher, writer and activist. Any time left over he spends hanging around cafes and pubs listening to people on their phones. He loves theatre that pokes into difficult places. You won't find him on Facebook.
← PREVIOUS POST
Frank Turner Review
NEXT POST →
Darwin Deez, Cancelled