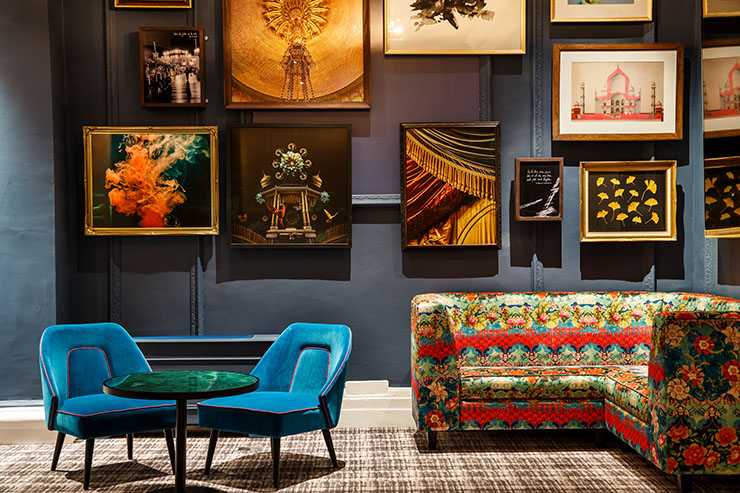 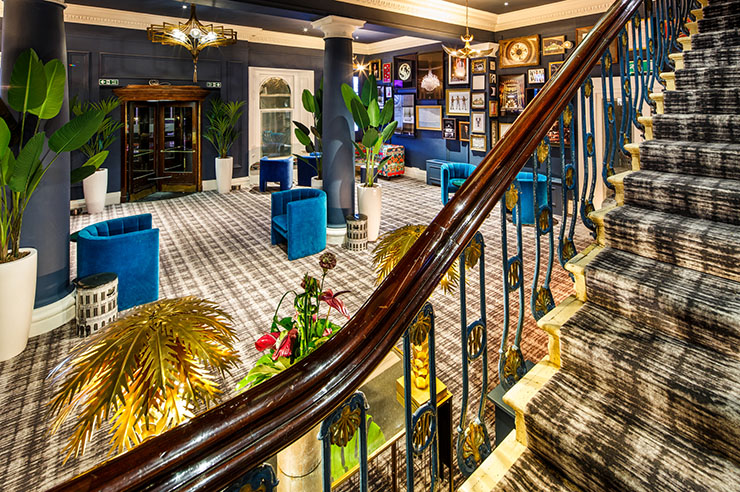 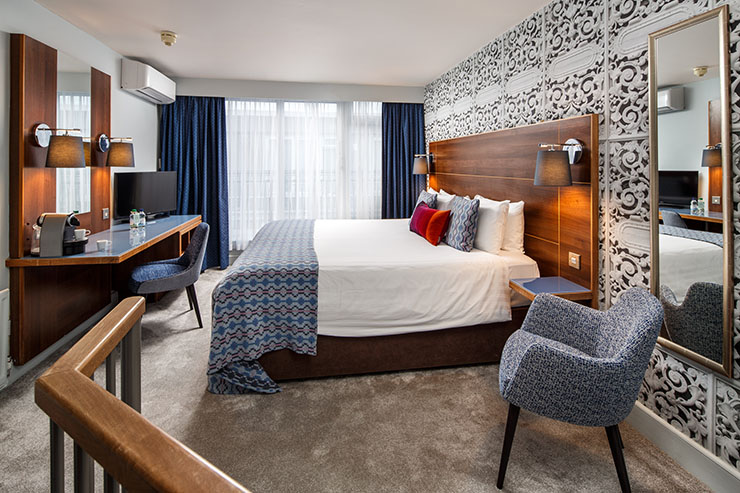 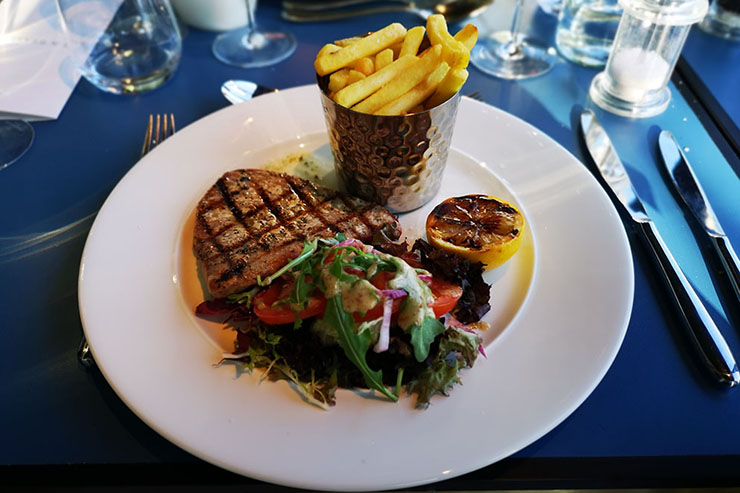 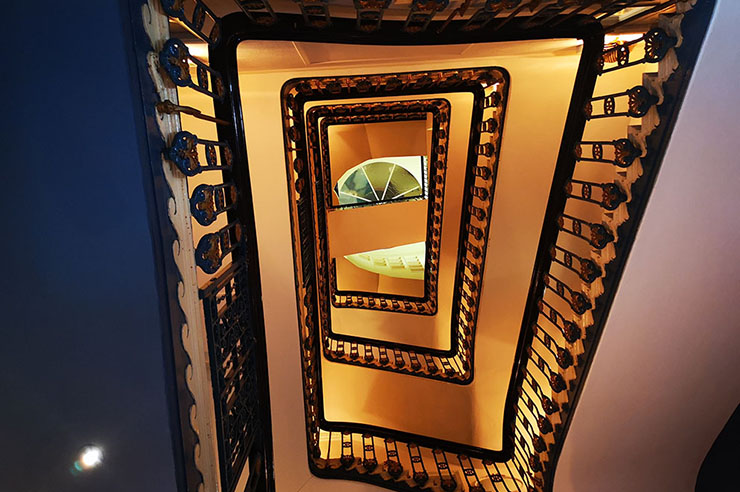 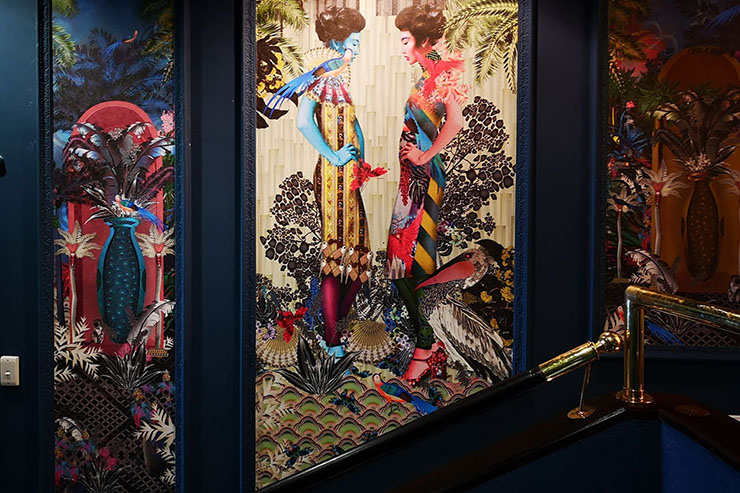 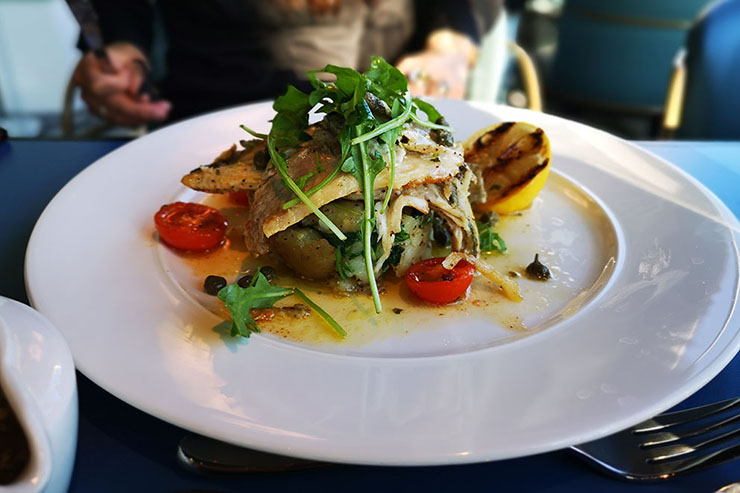 Flanked by the i360 to the east and Hove Lawns to the west, the Mercure Brighton Seafront Hotel looks not unlike a miniaturised version of its high-profile rival up the road, the Grand. From the outside, at least.

It might not have quite the same cachet as its larger lookalike, but the 19-century, Grade-II Listed Mercure has upped its game recently, with a characterful, contemporary makeover.

The most striking feature of this £3 million refurbishment has been the replacement of its traditional (or old-fashioned, if you want to be blunt) foyer/lounge area and 24-hour bar.

Magnolia and brown have been given the boot, in favour of a bold, on-trend partnership of vibrant orange highlights against inky blue walls, on which hangs an impressive gallery showcasing local artists. And we don’t mean naff pictures of seagulls and the pier here.

The collection has been put together by Hove-based interiors guru Helen Hooper, who’s gone for a blend of Regency glamour and quirky Brighton charm — plus an elegant Oriental influence in some quarters (inspired by the Pavilion, perhaps?).

The result is a bold statement, and one which General Manager Iain Lindsay admits shocked him initially, as he walks us around the hotel.

The bar (above) has had a major facelift too, and is now home to pieces from the West Pier, while the restaurant’s ceiling has been restored to its original height of over three metres and benefits from a sea view with plenty of light throughout the day.

Conversely, the rooms have retained more of their traditional edge, with grey silk-effect bedding and neutral walls. Here, the changes appear to be more in the detail. We spot Hove Actually pillows and sideboards that look like Regency town houses.

The new menu in the Mercure’s Goulty restaurant offers a modern take on seaside favourites. Seafood dominates: we try fish and chips, battered in Lewes-brewed Harveys beer; and melt-in-the-mouth sea bass with capers (pictured, below). Our other main, the tuna steak, is slightly overdone, but the “Goulty pleasure” dessert of Brighton Rock knickerbocker glory proves a huge hit with the younger diners among us.

It’s a shame there’s no kids’ menu, but they will do you smaller portions on request.

We also get to preview the brand-new drinks list, where the pick of the still wines is the Picpoul de Pinet from the Pays d’Oc, bursting with white-fruit and peach flavours.

We also enjoy the passion fruit martini served with a shot glass of Prosecco, and the refreshing, sharp, appley Pongrácz Brut fizz from South Africa’s Western Cape. With dessert, the Catalonian Moscatel is a rare treat.

It’s a small but carefully considered drinks menu, although we’d like to see some Sussex wines on there too. Some fizz, from Wiston Estate, perhaps. Or Stopham Estate’s award-winning Pinot Gris. It makes sense, when everything else has a local theme. And the Mercure certainly has that now — in (buckets and) spades.

A magazine journalist and former BBC minion, Gaz's words can be found in publications ranging from The Radio Times Guide To Films to 1001 Songs You Must Hear Before You Die, as well as on his blog The Wine Ninjas . He plays drums in a psych band, and once fell into a frozen lake in Transylvania.
← PREVIOUS POST
A Long Way Down Review
NEXT POST →
The Death of Ivan Ilyich Review
Mailing List
Recent Posts
Website developed in Brighton by Infobo
Copyright © Brighton Source 2009-2021
Brighton Mercure Hotel Revamped By Local Artists - Brighton Source