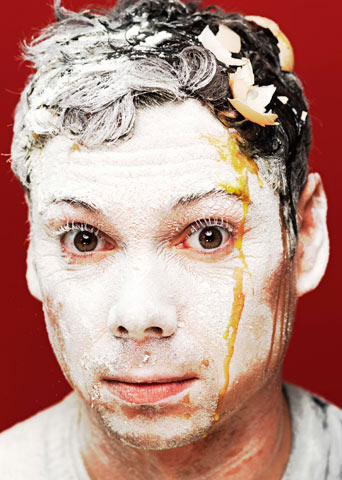 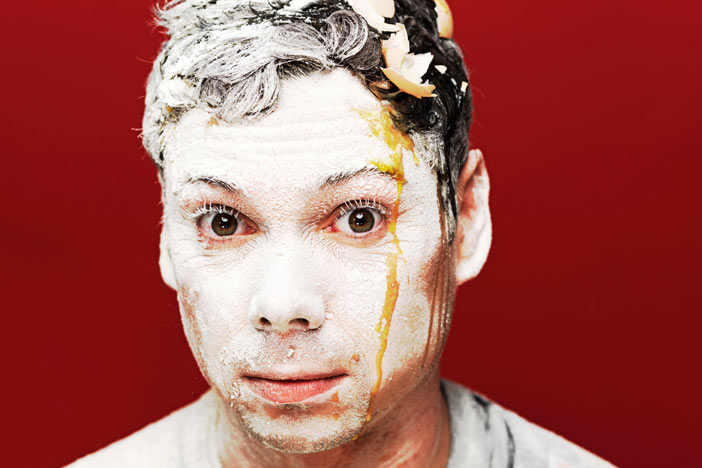 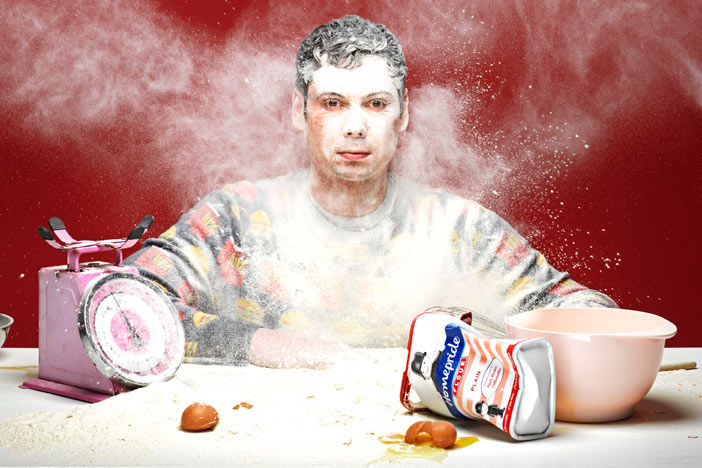 Sometimes an idea is so good you can’t believe it hasn’t been done already. When we were cornered in a club and excitedly told how MC Cashback had made an album where every track was the recipe to a different meal we just knew it was going to be great, or at the very least great fun. We’d already seen him perform and had soaked up his charismatic humour but never knew he had such a classic idea in him. Turns out it was the album he was born to make.
“I’d worked in kitchens for about ten years, annoying all of the chefs by rapping about what I was doing while I was cooking,” he says. “I worked at The Hop Poles for a long time, Komedia, Jamie Oliver’s. I thought, ‘No one has done a rap cook book,’ or any kind of musical cook book, as far as I know. So I did it.”

He did it indeed, writing both the raps and the recipes on ‘The Dinnersty’, as well as all the beats and melodies. It’s a hugely enjoyable collection, bringing in hip hop, reggae and bits of world music. The track ‘Homemade Burgers’ is not only a clear simple way to make Brighton’s favourite meal, it’s also extremely catchy, with a chorus by Emma B that stays in your head even longer than the meaty meal stays in your belly.
Elsewhere you can get stuck into ‘Lasagne’ (a meal that will “fill you up/make you slow like a panda”), ‘Lamb Tagine & Couscous’ (with its advice about marinating), or the Eastern European-styled ‘Goulash’ (“straight out of Hungary for when you’re feeling hungry”). But which is MC Cashback’s favourite recipe on ‘The Dinnersty’?
“’Jerk Chicken’ I think,” he says without needing much thought. “It’s my favourite song as well.”

With reggae backing and guest vocalists Dandelion and Uncle Roy, it’s one of the many tracks that take a bit of the taste of the meal itself into the music (‘B.U.R.R.I.T.O.S’ channels Herb Alpert’s Tijuana Brass for example). “Make it real smokey,” growls Dandelion with a straight face. As if it wasn’t informative enough, Cashback finds time to throw in a verse about how to cock rice and peas. Two for the price of one, Tesco-style. But the raps didn’t come without their unique problems.
“I found myself repeating some words a lot,” he says. “There’s loads of garlic, onion, chop, dice. It’s quite hard to make it sound interesting all the way through the album. I didn’t want people to think, ‘Oh, he’s just saying garlic again.’”

All the recipes are Cashback’s own. It’s quite a feat even before getting to the fact that the LP is really quite funny too, which of course can be a double-edged sword. Does it make it more difficult for people to take him seriously?
“You’ve got to impress people on two levels,” he admits, “with your musical skills as well as being able to make them laugh. I’m not gonna lie, I’ve been booed off a few times, but you learn from that.”

He’s had plenty of time to get used to audiences, having cut his teeth at the age of 14, MCing in, of all places, a strip club in his then hometown of Norwich. Moving on from jungle and garage, he fell in love with hip hop and moved to Brighton. And that’s when food started to find its way into his rhymes.
“I don’t know where it came from,” he recalls. “I just got a bit obsessed with it. That was what I wanted to rap about. Before that I’d rap about the usual shit really, being the best and all that sort of crap. But that doesn’t really mean anything to me. Food is something that I love and it’s more real to me to rap about food than it is to rap about the usual hip hop subjects.”

What we really love about ‘The Dinnersty’ is the thought that some kids will find themselves learning to cook by osmosis. One day they’ll be yearning for a burger and ponder going to McDonalds, only to have the realisation that, ‘Hey, we could cook our own burgers.’
“That’s what I want to do really,” he says with a smile.
MC Cashback might just have made Brighton’s most influential album.

Roots Manuva ‘Witness (1 Hope)’
“Right now I see clearer than most/I sit here contented with this cheese on toast.”
Who needs Cristal when you’ve got cheddar and some Hovis?

Nas ‘Fried Chicken’
“Mmm, fried chicken, fly vixen/Give me heart disease but need you in my kitchen.”
No salads for Nas, the diet starts tomorrow.

Ice Cube ‘It Was A Good Day’
“No barkin’ from the dog, no smog/and momma cooked up breakfast with no hog.”
Apparently Cube’s perfect day doesn’t include bacon. A serious oversight.

Notorious B.I.G. ‘Hypnotize’
“I can fill you with real millionaire shit: escargot.”
Yeah, we’ll pass on teatime round Biggie’s, merci.

Jay-Z ‘Success’
“How many times can I go to Mr. Chow’s, Tao’s, Nobu?/Hold up, let me move my bowels.”
And this guy actually pulled Beyonce – not with this line we hope.

James Kendall was the co-owner and editor of SOURCE. He’s been a music journalist since 1992 and spent over a decade travelling the globe covering dance music for DJmag. He’s interviewed a range of subjects from Bat For Lashes, Foals and James ‘LCD Soundsystem’ Murphy to Katie Price and the Sugababes. He’s a keen photographer and has work featured in The Guardian.
← PREVIOUS POST
Sussex Uni Student Demo Review
NEXT POST →
News, March
Mailing List
Recent Posts
Website developed in Brighton by Infobo
Copyright © Brighton Source 2009-2020
MC Cashback Interview - Brighton Source