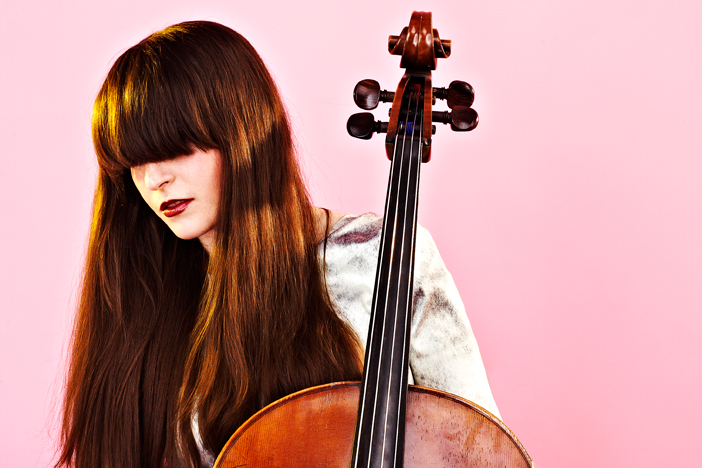 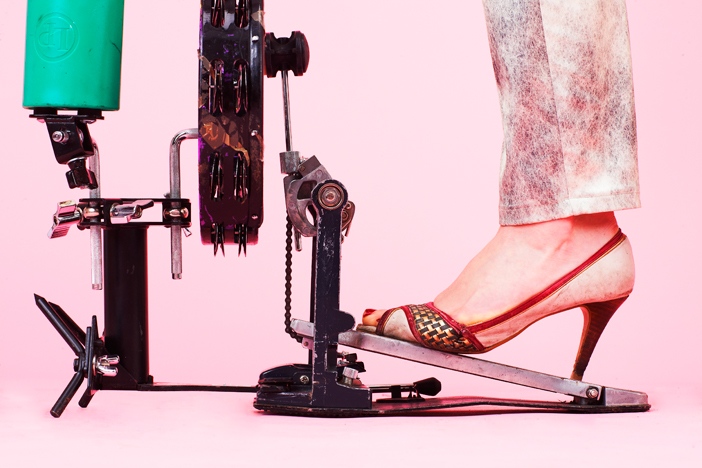 If you want to succeed at something, make it your own – that’s what they say. Well, we’ve never seen anyone play the cello like Abi Wade. One of the classiest instruments you can pilfer from your school’s orchestra cupboard, Abi has forsaken the sophistication to, well, hit it with sticks. Yeah, fine, we hear you say, very art college, but this is all happening in swirls of rhythmic harmony while she plucks at the strings and sings beautiful, off kilter folk songs. As if that wasn’t enough she’s got a bass kick happening with one foot and a tambourine attached to the other. We’ve got no idea how she does it. And, it turns out, neither has she.

“I can’t really do it separately,” Abi admits with a smile. “If you asked me ‘What are you playing on the bass drum?’ I wouldn’t know. I have to do it all together. It’s about getting into a rhythm I guess.”
She describes it as visual – she sees it as a circuit of hits.
“I know that it starts with the bass drum, then the tambourine, and then up to a stick. So I kind of see it like a circle and it just flows. I don’t know why, I can just do it,” she laughs.

If you’re considering getting an instrument to bash about, the cello would be pretty far down most people’s list. We guess they must be tougher than they look.
“Actually they’re quite delicate,” says Abi. “They don’t like heat, they don’t like cold. My cello has been remarkably good so far, so fingers crossed. I almost take it as a sign that it’s okay to be rough with it cos it hasn’t broken yet.”
She’s put the poor thing through a lot of strain though: mud, sand, and it doesn’t like it when she hits the strings directly on the song ‘Faker’.
“The bridge is starting to bend,” she confesses.

Abi started with the cello at the age of nine, so it’s perhaps not surprising that she’s started to turn away from the traditional ways of playing the instrument. Her choice came down simply to the fact that she just liked the look of it.
“It was the most impressive one I was given a choice of at primary school,” she recalls. “I don’t think my mum was too pleased though. It was a bit big for the car.”
Although her mother didn’t think much to the cello, it’s an instrument most people seem to like. We’ve got a soft spot for it from our days watching Lori Singer in the Fame TV show.
“I guess it’s ‘cause it’s so wholesome,” Abi suggest, “and the tone and tonality of it is just so rich. It’s actually the most closely linked to the human voice. it’s got the same range and the same timbre.”

Although she’s loaded down with pedals, boxes and sticks when she takes to the stage, one thing that’s absent from Abi’s set up is the omnipresent loop petal that solo artists seem to be addicted to these days. We have to say that we’re really pleased by it’s absence. Okay, we’ll get off the fence – we really don’t like them.
“A lot of people have said that to me,” says Abi.

But keeping to what her – admittedly impressive – four limbs and voice can do at once could lead to possible limitations down the line. At the moment the simplicity is what makes it so special – adding stuff to it could take away from the uniqueness. It’s a similar position to the one that The Agitator found himself in when he tried adding dance beats and samples to his blues stomping. Will Abi be sticking rigidly to the formula?
“The sound will progress I think,” she considers. “I’m quite lucky because I play the piano as well, so I think I’ll probably bring some of that in just to get a bit of diversity. I love harmonies, so I’ll possibly get someone else to do some vocal harmonies as well. But I’d like to try and keep it so that it can all be done on stage, so that it’s not completely different live.”

Her first EP – ‘And Blood And Fire’, released on Andy Rossiter and Daniel Copeman from Esben & The Witch’s Love Thy Neighbour label – stuck very much to what we’d seen of Abi live. Showing that the songs are strong enough to stand up without needing to see the spectacle of how they’re performed, the thing that leaps out is how much space Abi is able to provide around the lyrics.

Bringing to mind Regina Spektor and Joanna Newsome, her voice is at the same time fragile and strong, sensual and pure. All four songs are different enough to hide the fact that it’s all based around the cello.
“I haven’t done much recording so I didn’t want to go way out before I tried the basics,” she explains. “I wanted to just have it quite grounded. I felt that was more me. But I may try something new next time. We’ll see.”

One thing that strikes us is how difficult it must be to write songs not just on your own but also that have so much going on at the same time. Abi says that she usually starts with a cello riff or a beat.
“Sometimes I’ll find something which makes an interesting sound on the cello and build a piece around that,” she says. “Generally it’s a riff, and then I put things in that I feel will add to the sound. Like I brought a brush in recently because I wanted a ‘chshh’ sound. It wasn’t that I wanted to write a song around a brush, I just thought that it’d sound good.”

Brushes, sticks, boxes – it’s all sounds good to us. But most of all it sounds like nothing we’ve heard before. And that’s why Abi Wade is so exciting. She’s really made that cello her own.

James Kendall was the co-owner and editor of SOURCE. He’s been a music journalist since 1992 and spent over a decade travelling the globe covering dance music for DJmag. He’s interviewed a range of subjects from Bat For Lashes, Foals and James ‘LCD Soundsystem’ Murphy to Katie Price and the Sugababes. He’s a keen photographer and has work featured in The Guardian.
← PREVIOUS POST
The Jezabels Review
NEXT POST →
Rizzle Kicks Review
Mailing List
Recent Posts
Website developed in Brighton by Infobo
Copyright © Brighton Source 2009-2021
Abi Wade Interview - Brighton Source