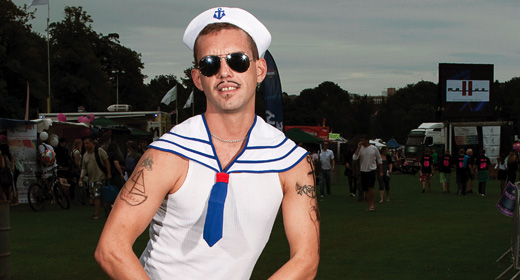 BRIGHTON PRIDE
WHERE THE STREETS HAVE NO SHAME
Sat 7th, Preston Park and throughout Brighton

Pride is as much a Brighton institution as sticks of rock, and shares many of its delicious pink and sticky attributes. It should come as no surprise to newcomers to our fair city that the world-renowned gay capital of Britain hosts this definitive LGBT celebration twice a year, and that we do it so much better than anywhere else. The main emphasis has always been the parade and the party in the park, although there are many less high-octane events going on raising money, awareness and a sense of community in this, Pride’s 18th birthday year.

THE PARADE
This year’s theme is Pride And (No) Prejudice and sees 55 entries from local community groups, businesses and national companies, Sussex Police, the RAF and fire service as well as charities including the Terence Higgins Trust, MindOut and Brighton & Hove Switchboard. The floats will be joined by thousands of whistle-blowing individuals making the annual pilgrimage to the Pride Mecca of Preston Park. Setting off from Madeira Drive at 11am, the route snakes around town taking in the Kingsway, West Street, the Old Steine and London Road, with legions of spectators lining the streets along the way.

PARTY IN THE PARK
Pride regulars were dismayed at the end of the event’s relationship with Wild Fruit, but the organisers have pulled out all the stops to bring a top bill to suit all tastes. Local hero DJs The Freemasons, with Steve Pitron, headline the 5,000-capacity dance tent, with a live set from Cass Fox. For the locals, who apparently only make up half of Pride’s audience, we have more Brighton DJ talent including Dulcie Danger, John Byrne, Verity Mayes, Lee Harris, Jonesy and Richard Jones. For less nn-tss-nn-tss-nn-tss banging sounds there’s a Revenge Pop Tent with alternative and indie from Boogalu Stu, Fifilicious and Louise C and the Revenge Pop Allstars. All artists are performing without a fee to help keep Pride a free event, and the bars contractor Club Revenge are donating all profits to Pride and local university LGBT societies.

PRE-PARTIES AND AFTERS
As well as dancing the park into a dustbowl, there are loads of pre-Priders and after parties going on. Friday 6th brings Frockabilly and Grrrl Friday together for a night of 50s-style rock’n’roll with DJs and live music at the Latest MusicBar. Boogalu Stu’s back in action at the Brighton Ballroom on Saturday 7th for his famed Popkraft night, with sock puppetry and cabaret. The Marlborough has a huge weekend of totally free events including an all-day barbecue. Ignition is hosting a terrace after party at Legends, and Ohso Social’s Dirty Sunset Disco brings some dirty electro house to Friday night. Revenge has a Kinky Dangerous Pride Night Special, The Volks plays host to Girls On Top and there are loads more events besides, check brightonpride.org for the full schedule.