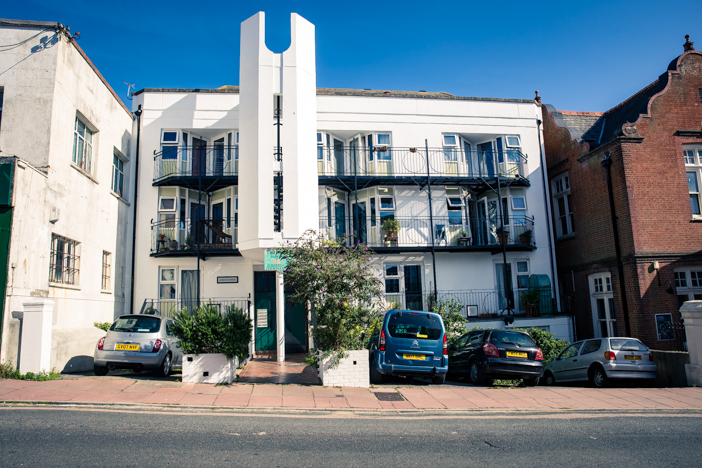 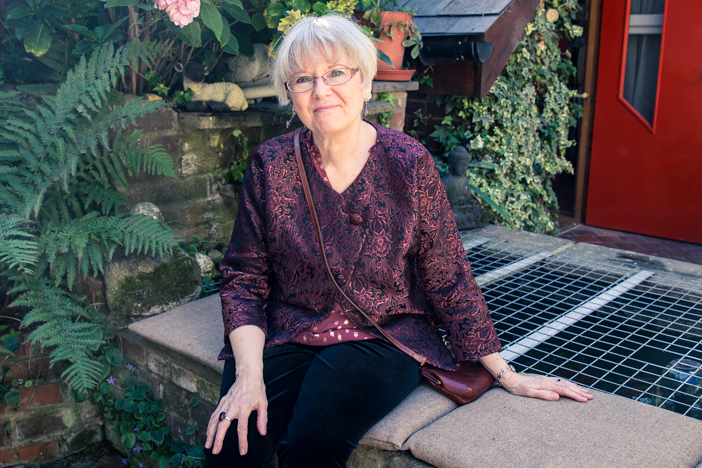 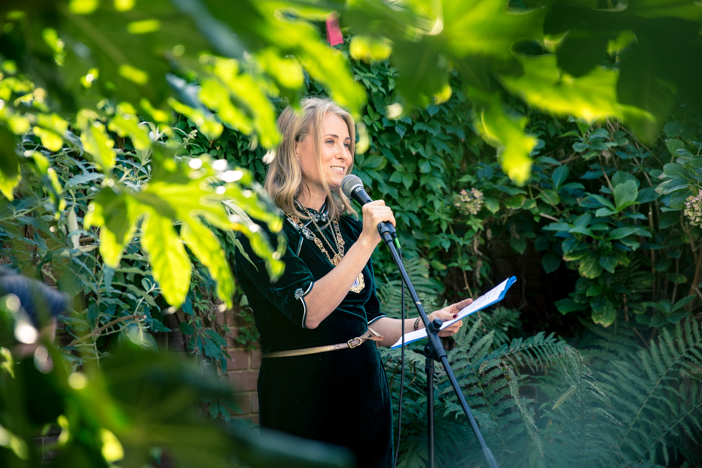 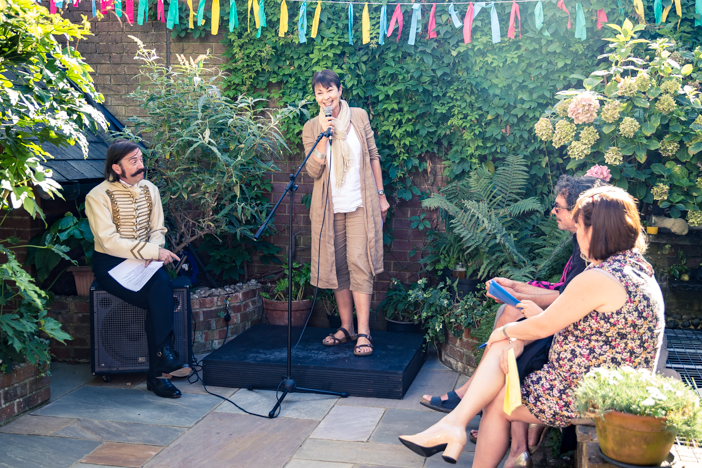 If you’ve ever walked up Bedford Place from the sea you may have seen that iconic building on your right with a turret, balconies and hanging flowers. Yes, that’s Christchurch which is one of Two Piers’ six co-operative houses dotted around town.

Two Piers has been part of the Brighton and Hove cultural landscape for 40 years. So we jumped at the invite to the anniversary party to catch a glimpse behind the scenes at Christchurch. It was a chance to learn about Two Pier’s history in changing national policy and setting up affordable secure housing. It was also exciting to hear of future plans for co-operative and self-build housing in Brighton. Inside, we met some of the residents from Two Piers and other housing co-ops in town, our local MP, mayor, councillors and a bundle of community and co-operative activists. Some of the early members are still living in the co-op with their children and grandchildren now running around. The bowls of fresh food were piled high and there was plenty of cider. There was also a rather happy cat enjoying the sunshine and looking for anything non-vegan that might fall its way.

Christchurch House, completed in 1988, was not a converted building like most of Two Piers’ other houses. Instead, it was purpose-built upon the site of a ruined church following an agreement with the Diocese of Chichester. So the architect, Michael Blee, worked with Two Piers to ‘design-in’ co-operative living spaces around the flats. He borrowed from Latin American traditions of balconies and shared courtyards which provide opportunities for informal ‘chat spots’ and clear sight lines to keep an eye on children playing below.

Our sparkling and moustached MC, known as Atters, kicked off the afternoon by introducing Brenda Boardman, a founding member and now emeritus professor at Oxford University. She spoke of the late 1970s when shared houses were considered a health risk as, without a ‘head of household’ (think: ‘man’), who would hold responsibility for safety? Two Piers initiated a public inquiry in 1979 to challenge these planning by-laws – and won! This opened up the possibilities for co-operative and shared housing across the country.

Next up, as one of the early members, Helen Russell revealed she still has her membership share from the early 80s with ‘No 6’ printed on it. There have been plenty of challenges and achievements for Two Piers since then. “Co-operative living is not always easy,” she pointed out, “but we have developed ways to deal with conflicts and differences, and processes for people wanting to join.” Being in a co-op involves time commitments such as regular meetings for decision making and “sometimes we make mistakes”. But democratic processes are vital. “All decisions about the co-op are made by members. In a co-op the tenants are collectively in control.”

Today, Two Piers continues to play important roles in local and national co-operative housing. Helen Russell pointed out that, locally, their members have supported new co-operative housing groups in Brighton with advice and support and, in some circumstances, start-up loans. This is in accordance with the 6th co-operative principle which calls for ‘co-operation among co-operatives’. Recently, they have worked with councillors and local government officers to identify sites for small self-build co-ops for people in housing need.

Our MC didn’t blink for the next guest as everyone knows Caroline Lucas MP. She pointed out that “Two Piers has become a beacon… for co-ops in Brighton and beyond”. She argued that locally there were not enough affordable homes and stressed how co-ops have helped people “in building community and putting down roots”.

Next to be introduced was the mayor – with our MC clearly dazed by the bling of the ceremonial chain. Alexandra Phillips is focussed with passion on the environmental agenda as a vital social issue facing us all. Providing sustainable and affordable accommodation – as Two Piers does – was a vital part of that work. Co-ops offer other benefits too and may help reduce ‘isolation and loneliness’.

Martyn Holmes, a founder member from Bunker self-build housing co-operative, congratulated Two Piers “for still being here – it’s hard, trailblazing work… Two Piers keep doing it – for 40 years – through all the changes in membership and policy”. He thanked Two Piers who “lent money to help us register as a co-op… This week we’ve been building our first houses on the Pankhurst Estate”. He also welcomed the help of Brighton Council and others in committing to find ten sites for community-led housing. Our MC raised a cheer from us all.

Larissa Reed, Executive Director of Communities Housing services at the council, acknowledged the hard work done by housing co-ops in Brighton. She hoped this work would be “a true partnership… so we can say to the rest of the country ‘it can work'”. She thanked co-ops “for sticking with us… even when we sometimes get it wrong.”

Our MC didn’t need to lift a finger as we went to eat the grub, look at the photos and stroke the cat.

In a quiet corner, we asked Helen Russell to sum up some of the achievements of Two Piers over the years. Since 1989, they have had six properties in Brighton and Hove. However, new housing legislation since then has made it harder for co-ops to access loan finance.

Helen felt that, first, despite policy setbacks, Two Piers could be proud of its philosophy of collective decision making. So, they have agreed and written down their own rules and procedures and undertaken training in non-violent communication. Determination and sheer hard work had kept them going.

Third, at a local level Helen considered that strong links with CHIBAH – a network of co-operative housing groups in Brighton – was important for sharing knowledge. Meanwhile, at a national level, Two Piers had been a founding member of the Confederation of Co-operative Housing and in 1993 they made significant financial contributions to launch it.

Helen considered that a fourth achievement had been installing double glazing, insulation and thicker doors for energy insulation – and a new roof. She was also proud that “we’ve been prudent and it’s very rare for us to run a deficit on our budget”.

Finally, looking ahead, Helen saw important links between housing and activism in wider social and environmental movements. The materials used in constructing buildings – and their insulation properties and emissions – were a vital issue. But the challenge was also to design new ways for communities to live together that would be environmentally less damaging.

Mike lives in Brighton. This is a full time occupation. He's also a researcher, writer and activist. Any time left over he spends hanging around cafes and pubs listening to people on their phones. He loves theatre that pokes into difficult places. You won't find him on Facebook.
← PREVIOUS POST
Floating Worlds Review
NEXT POST →
Inside The Universe Of Codex Serafini
Mailing List
Recent Posts
Website developed in Brighton by Infobo
Copyright © Brighton Source 2009-2021
Brighton's Oldest Co-op Turns 40 - Brighton Source