In Conversation With: Magnum Opus Tattoo 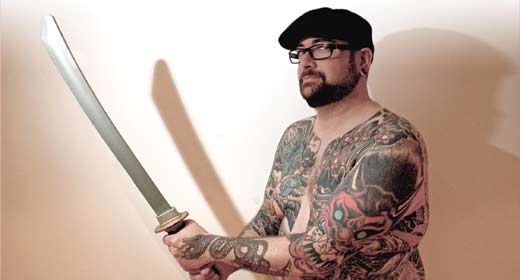 Nick Coquet: The tattoo scene just seems to keep on growing in Brighton.

Shone: I like the fact that it’s become more accessible. There are still some prejudices though, even here, where some clubs won’t let us in because our hands and necks are tattooed.

NC: It’s much less an exclusively male thing these days as well.

S: We’ve been seeing a lot more female clients, which is good. Cos there’s nothing sexier than a tattooed woman. So yeah, it’s nice to see that client base jump in that respect. And the good thing is that now they won’t only get tattooed by the female artist, they don’t really care. They know what they like and they’ll pick the artist that’s good for them.

NC: The popularity of tattooing brings with it some pretty shoddy work though.

S: Knowing that there are really good tattooists in Brighton you do kind of wince at some of the really bad tattoos you see. When people come in we do tell them there are good artists out there, it’s just about finding the right one to give you an individual piece. Like if someone came in with something out of a book or the internet we’ll always change it – if you’ve found it chances are someone else has as well. We want them to have a custom piece just for them, so they don’t walk out of here with someone else’s tattoo.

NC: You can cover up a lot of bad old tattoos anyway, I suppose.

S: Everyone makes mistakes, I’ve got old tattoos I’ve had covered up. People are starting to realise they can get their mistakes from the past covered up with something nice for the future.

NC: Obviously they end up with something bigger, which seems to be in vogue anyway at the moment.

S: There’s been a trend for that lately, yes. We had a girl come in for her first tattoo – it was three quarters of her back. Her first sitting was five hours. We’re getting kids coming in, 18, 19 years old, getting half sleeves. It’s kind of good and bad – good that they’re getting the bigger pieces but maybe bad that they’re getting a lot of visual art so young in their lives.

NC: Because they won’t look too good when they’re forty?

S: No, not really. The inks and processes are a lot better these days so they should still look pretty good. But we do dissuade people from getting their hands and necks tattooed for example, you really can’t cover those up and there’s a lot of prejudice with those. Unless someone’s already quite heavily tattooed we won’t do it it’s that prejudice thing again. We call them ‘career enders’; we had this one kid come in, he wanted a big rose on his hand. I said, ‘where do you work?’ – ‘Subway’, he said – and I was like, ‘you wanna work there the rest of your life?’ You know, you’re just not going to get a good job; employers are not going to hire you if you have your hands and neck tattooed.

NC: So you must have thought long and hard about your own then.

S: Well, I’ve been in tattooing for twelve years, and I only got my hands done about a year ago, my neck a couple of days ago. If you’re working in tattooing you kind of need to have visible tattoos. This is me saying ‘this is what I’m doing for the rest of my life’.

Nick Coquet is the Deputy Editor of SOURCE. He also presents Wednesday's Breakfast In Brighton on Reverb 97.2fm and The Florist's fortnightly music quiz, designs websites and stands about in the nude for life drawing classes. He's shaken hands with Meat Loaf and bumped into Keith Richards, just so he could say he's touched him.
← PREVIOUS POST
Club Preview: Lucky Voice
NEXT POST →
The Half Sisters Interview
Mailing List
Recent Posts
Website developed in Brighton by Infobo
Copyright © Brighton Source 2009-2020
In Conversation With: Magnum Opus Tattoo - Brighton Source