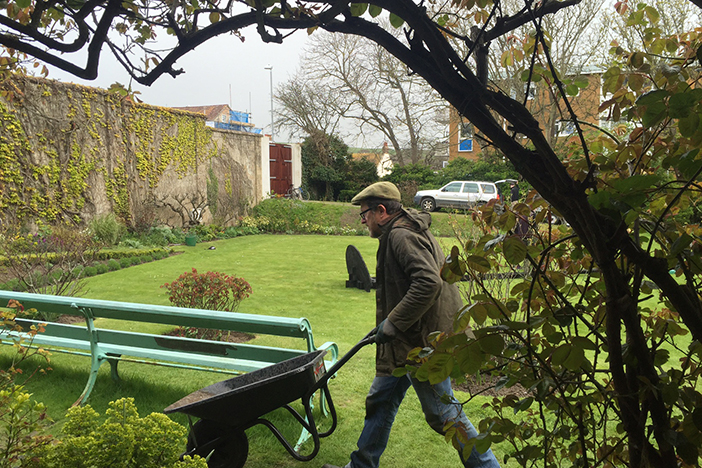 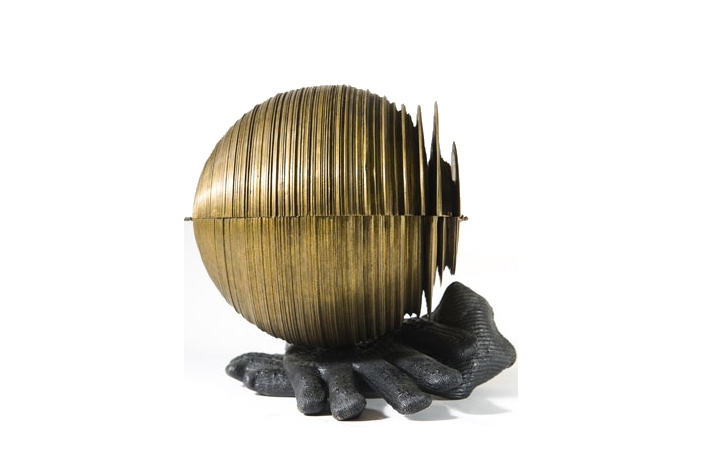 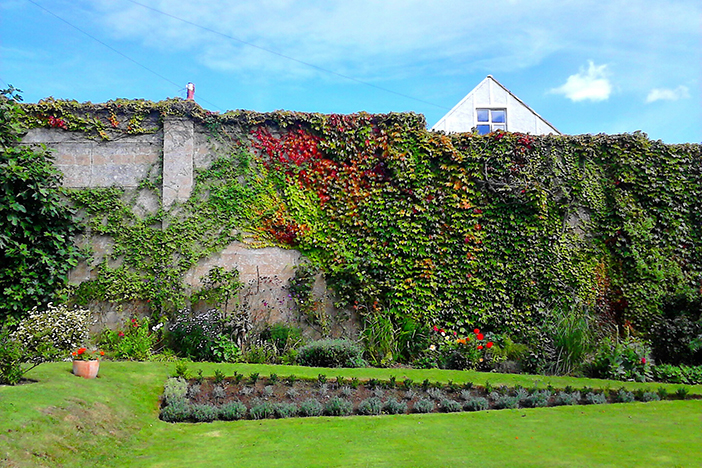 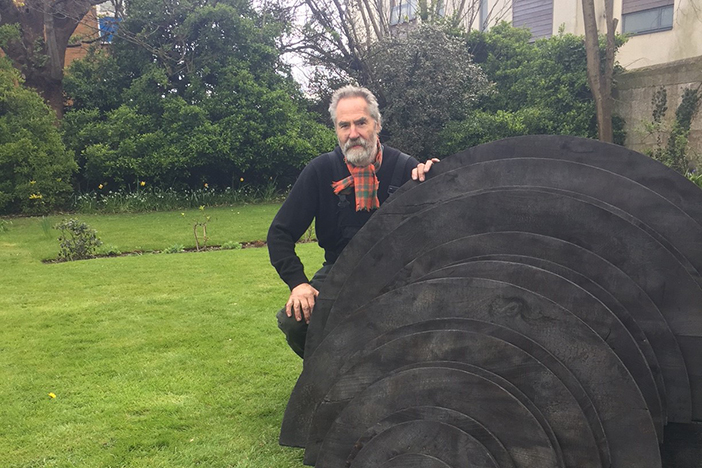 In The Secret Sculpture Garden

Hamish Black’s best-known work – to Brightonians, at least – is the enormous bronze donut near the Palace Pier. In his latest piece, the sage-like sculptor has created a ten-metre long physical manifestation of a soundwave, carved out of 200 charred black elm semi-circles, representing the call of a blackbird.

Stretched across the lawn of a beautifully-planted Kemptown garden, which was left as an idyll for art by its former owner, the sculpture uses wood from trees that were felled in Brighton after the 1987 Great Storm. The artist spoke to SOURCE as he began installing Black Blackbird. 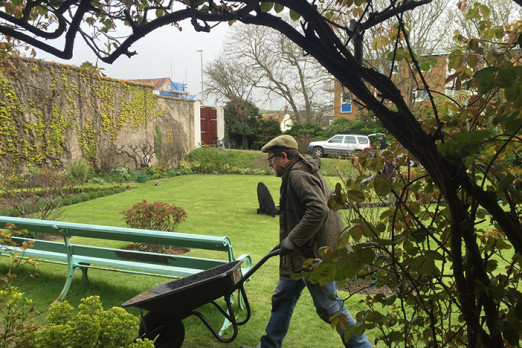 How did this Secret Garden come about?
I was previously approached by the Trustees of the Antony Dale Trust a couple of years ago and said, ‘oh yeah, that’s fine.’ Then the plan went on the backburner because they had to get gates and put the infrastructure in. Frankly, I didn’t think it was really a runner.

The business of making sculpture is a generous act. It’s been matched by a philanthropic idea about a space that should be given as a venue for putting up art and events. All of the other spaces around it have been built on. To find an original space that’s been left alone is pretty extraordinary.

Earlier this year, around Christmas, we spoke again. In the end there was a very short time frame, six weeks. I usually work in months and years. I hit upon a series which I have been making for some time called the Sounds Like series. They are works which are generated from sound: in this instance, it’s the recorded sound of a blackbird song, or a section of it.

Where did the wood come from?
I had previously won a national sculpture competition, and the prize was a large amount of elm to create a sculpture, which was my piece ‘Treehouse’, for The Level. I had some elm left over. As  2016 represents the 30th year since the Great Hurricane, I chose to return the elms to Brighton in the form of Black Blackbird. There was a phenomenal amount. I had about 45 trees. I have a studio as big as this garden in East Chiltington. I also had a residue of timber left, so I got in a mobile saw and put it in storage for 29 years.

We thought it would be very apt to do this in Brighton, in a secret garden where people would pay attention to sound around a silent sculpture. It embodies a completely ephemeral experience, but there is a physical connection. 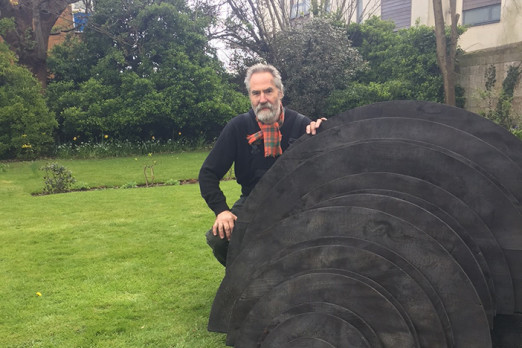 You’ve just arrived to set it up. Are you happy with its initial look?
I was very anxious to use the way in which the lawn is sunk and then step up. There’s this level inside of all these circles, almost like a spirit level. I wanted to respond both as a site-specific work and as a way of bringing other works.

I built it in my studio. One of the things about putting a sculpture on the lawn is it gets fuzzy when it touches the lawn. That’s always a kind of worry. But the green against the black sings, which is a bonus.

We were talking about whether to just let the grass run. I didn’t really want to mow it around the edges, but there is a way, apparently. When you look at it you get a virtual mirror image or an echo, which are the two metaphors we’re playing with.

We had to bring it to assemble on site. Two people can just about carry the bottom bit, let alone everything on top. By the time you get it together it’s a crane job. It’s really about leaving it so you can visit the pre-existing space rather than over-managing it.

Tell us about your other works in the garden.
They’re also from the series. One, called KICK, is a sculpture commissioned to raise funds for the last Paralympics. I’m not a sportsman but I chose football, partly because I don’t know very much about it and partly because I’m interested in it in a political way.

I purloined the services of my son, who’s a sound engineer. Watching him recording sound and the graphics, I recognised the relationship between the visual and audio experience. I got a recording of the sound of a kick of a football.

Sound has this zigzag pattern, and Black Blackbird is that pattern taken through 180 degrees. I took the sound timeline around the circumference of an Olympic-size football, allowing me to make a completely spherical object. It sits on a pair of gloves as a support cushion. 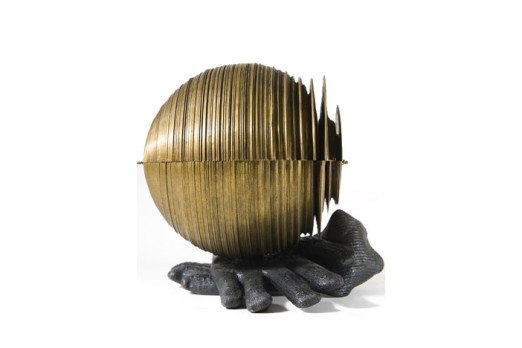 Another one is called Sounds Like O, generated from that childhood thing where you take a bottle and blow across the top. I like that, so I found a way in which I could play around with the sound which one knows is generated by the volume of the bottle and the speed of the wind. It’s also about the inside of the bottle, so I found a way I could cast the inside in a flexible mode – a very soft, malleable form. It was originally made from clay mould into plaster. I sliced it out like salami and laid it out like a deck of cards before casting in bronze.

There’s another smaller piece, also called Blackbird, in expanded aluminium – a material I’d never come across before. It’s used in the aircraft industry to occupy space in a wing, particularly for fuel tanks. I got a big panel of it from the suppliers for British Aerospace. They had this huge lump which was not perfect from their point of view. I was able to get it cheaper and they were only too happy to sell it. It is made of foil, incredibly vulnerable and quite difficult to use, made like a kind of honeycomb sandwich – the strips are stuck alternately, like tissue paper for Christmas decorations. 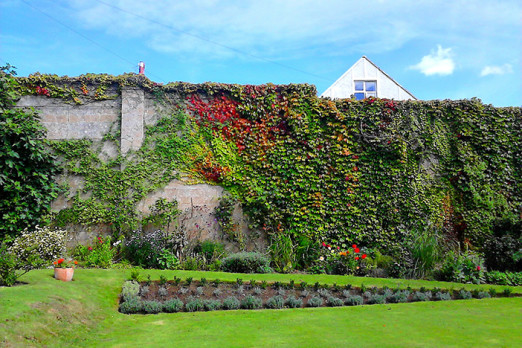 It will be interesting to see how people interpret the space.
This whole space is completely subterranean. You have no idea, from outside, what’s inside. There’s something to be said for that. Whichever way you come through, you will encounter a lot of urban development. You get to look down on the sculpture from above, too: that relationship of seeing a clear, graphic object was part of my thinking.

Do you think people will get it?
Museums and galleries have had an anxious period of the extended label, which stems out to be like a mini essay. By that time you have completely destroyed the possibility of an adventure for the viewer. It is called Blackbird, so there is enough, for me anyway, to generate an idea.

Any way in which you can get into art is worth it. You don’t always need to explain it, and adventures come about through not doing that. There are only titles, dates and materials, which it’s useful to know.

Will the weather affect the work?
It’s charred elm, and the charring changes the chemical surface of the material. It’s a very old mechanism of treating timber. You can think of the Japanese who did it thousands of years ago. But no wood outside will last forever, and neither do we.

The Sculpture Gallery, The Secret Garden, Kemptown
Every weekend through May, 12pm – 6pm
More info here

Ben Miller is a SOURCE feature writer and reporter.
← PREVIOUS POST
Street Source No.2
NEXT POST →
Funk The Format Festival, Sun 29th May