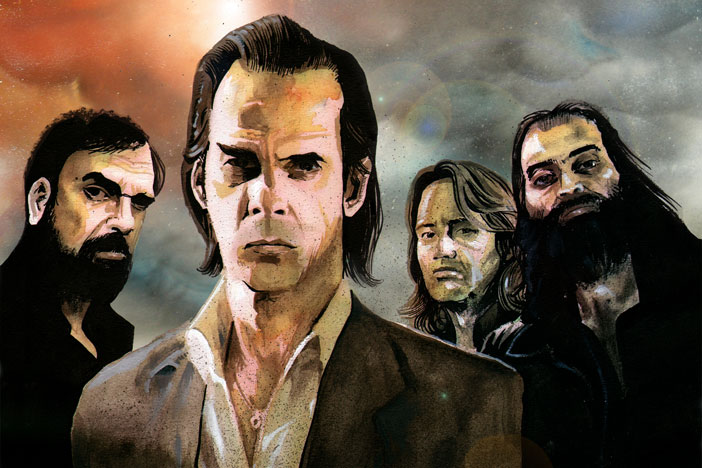 You could get burned as a heretic for suggesting – especially after the excellent ‘Dig!!! Lazarus Dig!!!’ – that Nick Cave’s best work recently hasn’t been with the Bad Seeds, the exalted band that’s been producing gothic masterpieces of various shades for the last quarter of a century. But with Grinderman the 52-year-old Hove resident and his bristly band of sonic guerrillas have never sounded so alive.

New album ‘Grinderman 2’ arrived prefixed by the swamp-squall of ‘Heathen Child’, the soundtrack to one of the most ridiculous videos of the year. Cave, drummer Jim Sclavunos, bassist Martyn Casey and multi-instrumentalist Warren Ellis shoot lasers out of their eyes and fart fire while dressed as centurions. Despite some sinister undertones it’s a huge amount of fun – just like the explosive distorto-blues punk it’s promoting – and that’s the Nick we’re hoping to meet in suave Soho drinking den, The House of St Barnabas.

Because as one of music’s true intellectuals – he’s also a highly regarded novelist and screenwriter – the big man famously doesn’t suffer fools. Elegantly sprawled across a leather chair, at first he seems completely disinterested, intently enthusing to the reassuringly mellow Jim about the colour of the new LP’s vinyl. However butting in we find an immediate common ground: a love for Brighton.
“What a town!” he says, suddenly engaging. “I love Brighton. I think I’m there for the long haul, the duration. Alright, let’s fucking go for it.”

Aptly, going for it is just what Grinderman are all about. They lock themselves in the studio for five days and improvise with noise, never shying away from exploring areas of wrongness or embarrassment. It’s very different to the controlled, cerebral Bad Seeds method of Cave bringing in his solitary, studied songs to be developed.
“We will try things out that are maybe instantly regrettable,” admits Jim of the Grinderman sessions. “But by going to those remote territories we find things to do that are very different to what we’ve done before.”

The lack of holding back is echoed in the lyrics. On the first outing Nick famously complained about not getting any action on ‘No Pussy Blues’. This time out, in ‘Kitchenette’, he offers to “stick my fingers in your biscuit jar” to save the object of his affection from her “brood of junky buck-toothed imbeciles/the ugliest fucking kids I’ve ever seen.”
“There’s no way I can self-censor because it’s happening so fast, day after day after day,” he says. “I go to places that are different and more extreme usually than I do with the Bad Seeds. But I always take those lyrics away and work on them, and turn them into acceptable, workable lyrics.”

At times – and in very deep contrast to the Bad Seeds – the Grinderman lyrics come on like poetic Tourette’s. Is it coming from the deepest part of Nick Cave or is he playing a character. Slightly tongue-tied in the presence of a famously spiky interviewee, we ask Nick about the lyrical self-depreciation.
“It’s ‘self-deprecation‘,” he huffs, correcting us in a heartbeat, before pausing to think whether he can be bothered with the question. “I never play a character… I don’t know what to say about that. I use characters in songs, I think that there’s a narrator to these songs. I don’t take on some sort of persona, but I do write narrative songs from different points of view. It’s not like I’m the Thin White Duke.”

Very much told, we push on very careful with the idea bandied about – and even offered as a direct Cave quote – that Grinderman’s fun-time, sex-and-loud-guitars have been the soundtrack to a midlife crisis.
“People who have a reticence toward those of a certain age talking about certain things and they call that a midlife crisis,” Nick sighs not unreasonably. “It’s one of those expressions that’s supposed to render what you do impotent in some way. I never saw it as a midlife crisis. I never had a midlife crisis. It’s a very superior point of view.”

There’s a feeling that if he could banish the intrusive poking at him by critics Cave wouldn’t miss it, but in the gaps in our interview he seems keen to find out what Alexis Petridis has written about him in that day’s Guardian. And when we ask if people ‘get’ Grinderman he says that women love it, “except the chick from The Wire,” a sly joke about the misogynous accusations from a female journalist at the chin-stoking magazine. But Cave is filled with quiet confidence – he doesn’t need a pat on the back from anyone. Jim – who was a key player in the no wave movement with his band Teenage Jesus and the Jerks before playing with The Cramps and Sonic Youth amongst many others – has a similarly regarded career and seems laidback enough not to care. The pair are clearly – after 14 years in the Bad Seeds – close friends, and are good company together. Is it easier for them to work in the democracy of Grinderman as apposed to the Bad Seeds where Nick gets top billing?

“I think it’s pushing it a bit to call Grinderman a democracy,” Nick smiles.
“I don’t think it’s democratic but it is a group effort,” adds Jim.
“The Bad Seeds are a group effort too.”
“There’s a lot of delegation that goes on with Grinderman that I think works really well,” Nick says. “For example if it comes to mastering a record I’m happy to have nothing to do with that and let Jim sort that out because he’s actually a producer. I tend to do the covers – because I failed art school.”

It seem that there’s a trust in Grinderman that couldn’t have come with a completely new set of musicians.
“Very much so,” nods Nick. “Grinderman is very much about trust, for me certainly. That I’m free to express myself in any way that I like because people understand that it’s part of the process of trying to find something new and interesting.”

Decades into his music career, Nick Cave is rare among his peers in that he’s definitely still achieving that ambition.

James Kendall was the co-owner and editor of SOURCE. He’s been a music journalist since 1992 and spent over a decade travelling the globe covering dance music for DJmag. He’s interviewed a range of subjects from Bat For Lashes, Foals and James ‘LCD Soundsystem’ Murphy to Katie Price and the Sugababes. He’s a keen photographer and has work featured in The Guardian.
← PREVIOUS POST
Interview: Playgroup
NEXT POST →
Sailor Jerry Presents
Mailing List
Recent Posts
Website developed in Brighton by Infobo
Copyright © Brighton Source 2009-2020
Grinderman Interview - Brighton Source