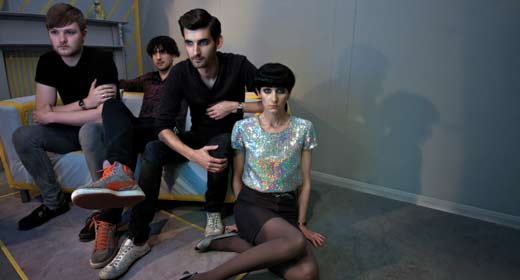 One of the best things SOURCE has done this year is blag Heels Catch Fire onto the bill of the brilliant Loop Festival. Well, blag might not be the right word – they deserve to be there as much as Squarepusher, Fever Ray or Emiliana Torrini.

But we have got a confession to make. When we started the campaign to get them on the Futures stage we’d heard exactly two and a half songs of theirs live and a couple of bits on MySpace. We got a bit carried away. The thing was we just knew they were special. We knew that they’d blow people away, the way that they blew us away. We just crossed our fingers and hoped the rest of their songs weren’t shit.

Thankfully now we’ve seen a full set we know that they are going to hold the whole tent with the intricacy of a perfectionist Foals and the heavy rock intensity of At The Drive In. As well as looking like a great band – not to be underestimated – Heels Catch Fire have musically got it all. Incredible players all the way from the monitors to the riser, Laura and Elliot’s guitars weave in about out of each other’s melodies delicately while Mike’s wandering basslines and Dave’s complex drums drive things forward. Most bands with a sound so complicated forget two important things: songs and emotion. Heels Catch Fire have both in droves.

“We’ve always tried to be emotive without being emo,” says Mike. “We try to be genuine. The energy and intensity is the key, without being melodramatic.”
But are the technical aspects and the songs at odds with each other? Surely songs are about simplicity and getting into the musicality of it all is straying from the path. Elliot thinks not. “We don’t like showboating with riffs or anything like that,” he urges. “It’s about creative something that’s interesting. Complication for me is interesting, as apposed to a straight line. That has its place, but the complications in the guitar parts comes from a desire to make it sound interesting from a listener’s perspective.”

“Our mantra is always, If anybody can write this song then it’s not cool and we need to put a bit of Heels Catch Fire into it,” adds Laura. But come on, rock’n’roll should be three chords, anyone can do it. “Then we’re not rock’n’roll,” says Elliot.

Actually we’re just playing devil’s advocate here. A few years ago the idea that musicianship is the enemy of music was prevalent but prog is back. Being able to play seems to becoming back into fashion, and every member of Heels could outplay Lucifer at the crossroads. “It’s showing respect for your songs really,” says Elliot.

“Songs that were accessible and that were easy to play took over music for a while,” laments Laura, “but we don’t want to be that. I learnt to play an instrument well enough, so I don’t want to be in a band that anyone could be in.”

The initial concept of Heels Catch Fire was that Laura was the left hand and Elliot was the right hand, like a piano. Consequently the pair never play the same thing at the same time. “As long as we kept that as a frame for an idea we knew we could develop the sound,” explains Elliot.

Recently the sound has become heavier thanks to the arrival of new drummer Dave (who’s loving the musical challenges of Heels), but the band have always had rock at their heart, Elliot claiming to be a “Slipknot hoodie” – something borne out by his screams of rage on stage. That rage could very well have come from their missing out on an invitation to play SXSW this year thanks to visa problems. The offer is open for next year though and everything else seems to be going their way. A recent gig in Paris had them treated like Led Zeppelin and they’ve been picked up by the Maccabees’ booking agent, 13 Artists. It all looks very rosy, and the Loop invite is especially exciting for the band.

“We missed out on playing Great Escape this year,” Mike says, “so it’s really good to be playing at a local festival. Especially one with such a good line-up.”A good line-up much improved by us poking our nosy in, we have to say.

THE HOTTEST HEELS IN POP

BLUE SUEDE SHOES
Don’t step on them, advised Elvis. Go on a diet, advised the rest of the world.

James Kendall was the co-owner and editor of SOURCE. He’s been a music journalist since 1992 and spent over a decade travelling the globe covering dance music for DJmag. He’s interviewed a range of subjects from Bat For Lashes, Foals and James ‘LCD Soundsystem’ Murphy to Katie Price and the Sugababes. He’s a keen photographer and has work featured in The Guardian.
← PREVIOUS POST
Loop Interview
NEXT POST →
Gig Previews: July 2009
Mailing List
Recent Posts
Website developed in Brighton by Infobo
Copyright © Brighton Source 2009-2019
Heels Catch Fire Interview - Brighton Source