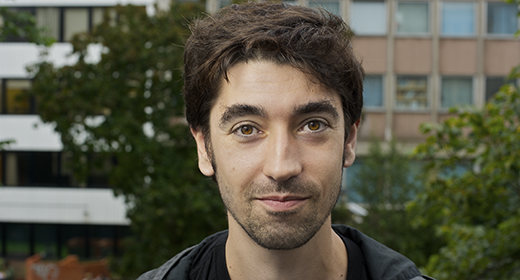 You won the UK DMC championship again. Did you even tell anyone you were entering?
I decided to enter a couple of weeks before the last heat. I wanted to do the last few years as well but just didn’t have the time or patience to do it. You’re allowed to use [DJing software] Serato so you didn’t have to press records this year, which is awesome. I entered the Plymouth heat and won that, which put me through to the UK final and I won that.

What was the routine like?
It starts off with a track from The Qemists – well, bits and bobs of it – with lots of samples of Beardyman that I do lots of tricks with. There’s a YouTube keyboard star called Ronald Jenkees. I emailed him to see if he’d send me the separate parts for the competition and he was really overly friendly and sent them to me right away. Then it goes into the Enter The Dragon music from the Bruce Lee film and a dubstep thing that I got the parts for. Then there’s more dubstep before going into the commercial bit, the Nero track ‘Me & You’ which I beat-juggle. Then it goes into a really techy beat-juggling thing at the end and finally into a scratch.

Phew. So has crate digging changed then, away from record shops onto the internet, getting the separate parts?
You can look at it loads of different ways. Turntablists still do it the old way. Occasionally I will too, but I prefer to dig around on YouTube and online instead and make the music out of other people’s music. Then alter it for scratching so I can do more technical things. Or you can make things easier for you to use, so it sounds nicer to listen to. Not using just vinyl does take away a bit of the traditional sense of turntablism a bit – taking one or two records of other people’s music and making it different with your hands here and there. It’s a bit of a headache now though, as you also need to know how to arrange music in the computer. But it opens the doors to so many possibilities.

You’ve always been interested in technology. Are other turntablists catching up to your way of thinking?
Well, I think everyone in the UK final used Serato and I reckon every single one of them had created pre-made sets. In the heat that I did in Plymouth there was only one guy using real records all the way through.

Do you have to make a new set for the DMC final in October?
Most people do the same set but I’m going to change mine. The people I was up against in the UK were good but the guys in the world finals are just ridiculous. There are two of my scratch idols that I’m up against. I’m working hard to get better cos at the moment I’m shit compared to some of the other guys. It would take me three years of practice to beat those two but I’m practicing all day, apart from eight hours sleep and tea breaks.

You seem to be doing a lot more production. How’s that going?
I’ve been very lucky actually. Beardyman had his album out and he’s chucked me loads of remixes and I’ve been really fortunate with Fatboy Slim. I’d been doing some stuff for Skint and they offered me the ‘Right Here, Right Now’ remix last year. I did a dubstep mix and I finished it at 11am and emailed it to Skint. They sent it to Norman Cook and he texted me a couple of hours later saying, ‘This is brilliant, I’m going to play it tonight on Radio 1.’ Skint put it out as an exclusive on Juno at 9.30pm and the next day it got to No.1 in the Juno chart. I was quite chuffed with that. They got me to do a mix of ‘Praise You’ this year and it’s been lingering in the Top 20 Beatport chart for a few months. I’m going to be making some electro swing stuff soon too, and I’m also really into glitch-hop.

FYI
WEB: facebook.com/jfbscratch
SINGLE: ‘Something Out there’ on Skint
DMC WINNING VIDEO: tinyurl.com/JFB-DMC

WORDS AND PHOTO BY JAMES KENDALL

James Kendall was the co-owner and editor of SOURCE. He’s been a music journalist since 1992 and spent over a decade travelling the globe covering dance music for DJmag. He’s interviewed a range of subjects from Bat For Lashes, Foals and James ‘LCD Soundsystem’ Murphy to Katie Price and the Sugababes. He’s a keen photographer and has work featured in The Guardian.
← PREVIOUS POST
Six Of The Best Stoner Anthems
NEXT POST →
Secret Eater: Aloka