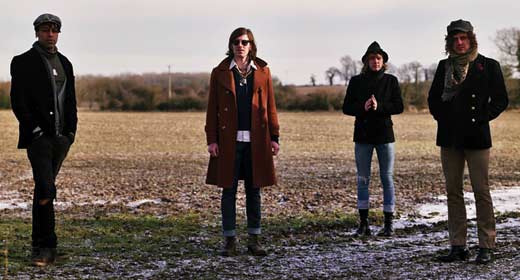 Since de-Kooking last year, former bass player Max Rafferty has been busy putting together a new band, stepping up to the front man plate for the first time. We thought we’d better find out a bit more, so we can say we were there first.

How has it been taking centre stage in the band this time round?
It’s been different! I’m quite enjoying it to be honest, it’s just really nice finding your feet again and doing something different.

Has being in a new band allowed you to explore different musical avenues?
Yeah, definitely. I think once you start out and find a route which you then follow, you just end up sticking to it – that’s your direction. Being in a new band, we’re still finding that direction.

Do you have any influences that trip off the tongue, like ‘x meets y on acid’?
Everyone in the band’s into different music – Funkadelic, Jimi Hendrix, Led Zeppelin, you know, all across the board, and it sort of meets in the middle. And then there’s Sean our bass player, he’s into more modern stuff as well as jazz and things like that, you know?

How about the touring, it must be good to be playing smaller rooms again?
You know what, it is really nice. It’s good to be able to go out and find our feet in front of whoever, be it three people, thirty people or however many. It’s about us playing as much as we can right now, you know?

Was it good to go straight to some headline dates rather than just support slots?
To be honest we’ve done a real mix of it. They’ve not really been so much headline shows as such, it was really more what was available at the time. We wanted to book a small tour so we could get our own game together before we try to move forward.

Is the weight of expectation for what you’re going to do next a pressure?
I don’t feel any pressure at all to be honest. I’ve really enjoyed having some time off, being able to write and finish songs off and then playing them to friends I’ve known for years, it’s just really good, it’s been good fun.

Have you had much label interest from the live dates – or are you still signed to Virgin?
No, I’m not with them anymore, but we’re in the process of sorting things out at the moment, I’m not going to say anything right now, we’re trying to keep everything quite close…

Are you recording at the moment – do you have any plans for when an album will be ready?
Yeah, we’ve been in and recorded part of what will be our up-and-coming record, we did that at Leeder’s Farm in Norfolk, which is Dan Hawkins’ (The Darkness) studio. That was really good; we’ve just been up there and recorded pretty much four or five complete tracks.

Does being from Brighton have any specific influence on your writing?
I’m not originally from Brighton, I’ve lived here for about eight years, but I think it’s got such a good vibe to it. There are so many influences here, so many students and other musicians, it’s bound to affect what you do. But I wouldn’t say there was a specific thing about Brighton, like a direct influence in what the songs are written about or anything like that.

Are you going to be playing any festivals this year, Beachdown for instance?
I think we’re doing Beachdown -they get booked up quite early in the year, and we’re still figuring out where we’re going to be, we’re obviously trying to get the record done and put things together, but we want to play as many as possible, yeah, it all just depends on time really.

Is there anything you’ll definitely be doing differently this time around, with the benefit of experience?

Well I’ve learnt a lot, I’ve done things the wrong way and the right way, I’d say. To be honest it’s always different, isn’t it? Each time’s going to be a completely different journey so you’ve just got to take it as it comes…