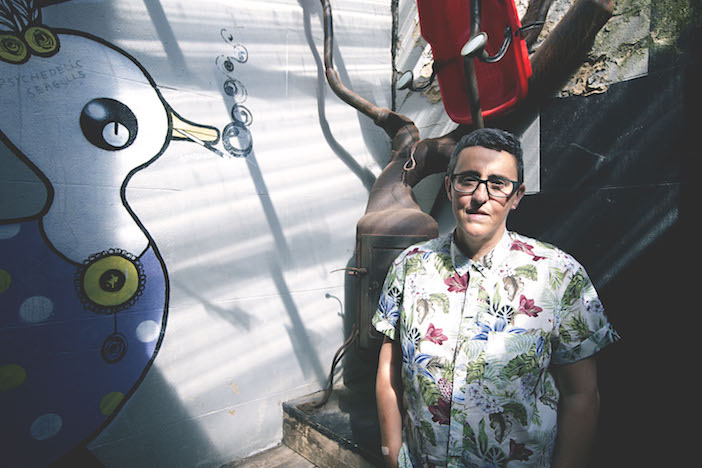 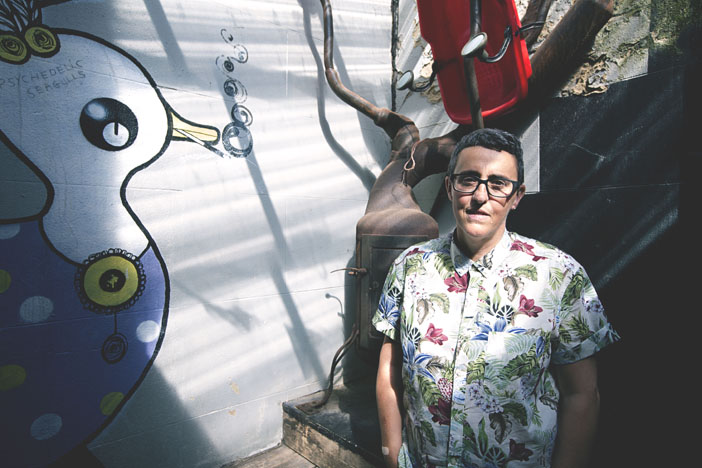 Kate Wildblood spiced up the lethargic lesbian club scene in the early ‘90s and still champions house music in Brighton. She has been instrumental in documenting the city’s gay history and the Pride movement and was a major contributor to the BrightonPride25 exhibition that accompanied this year’s event.

House music emerged out of gay culture but describe your experience of being a lesbian in that scene in the early 90s?
I came down here in ’91 and started going out on the lesbian scene but there was no house to be seen or heard. Through work, one of the gay boys said, ‘Come to Club Shame’. It was at the Zap and was Paul Kemp’s thing before Wild Fruit. I just thought, ‘Wow… this is how it is supposed to be!’ Women were in the minority but it was a very welcoming space. It was very diverse in terms of punters and you didn’t necessarily have to pass the queer test to get in the door. And it was proper house, in a filthy room, club-wise it was where I wanted to be. So I sort of became an honorary gay man.

Did your involvement in Pride and in the club scene emerge together?
I got involved in Pride in 1992 and it was our choice to put a night on. The suggestion was to go with another cabaret night, so me and a woman called Tiz set up Shameless Hussies instead and amazingly the women from Venus Rising [lesbian house night at The Fridge, Brixton], Terri and Vikki Edwards and Queen Maxine, were ridiculously supportive: the came down and DJed for free, even told us how to run a club for free. So we set that up, I met the missus and we brought a bit of house music to Brighton for girls.

Let’s talk about the early Pride marches.
Pride came out of the anti-Section 28 marches [Section 28 of the Local Government Act 1988 prohibited local authorities in England and Wales from “promoting” homosexuality], so there were several of those over a number of years. The community got together and decided to have a more positive type of event. By ’92 I was involved – on the committee and organizing things like the ‘lesbus’. It wasn’t a parade it was a march, a furious march. I think what Pride has done here is show that a city can be proud of its gay community and that we can just all rub along together and it’s part of life. Queer is part of Brighton’s DNA really. If you look at the parade this year – it felt like the whole city had come out. Norman Cook said in an interview: “It feels like we are proud of our gay community but we are also proud of ourselves for that.”

Is there still a political element to Pride?
It has come full circle. Since Paul Kemp and Dulcie have got back on board they have focused on campaigning as well as celebrating and fundraising. Two years back we did a big campaign for the LGBT Russia thing; last year we did 78 Countries; this year was 78 Countries again and we also did We Are Pride: Spirit In Pictures so we were really wanting to look back at how far we’ve come since the first Brighton Pride but also how far the rest of the globe has to go. We might be alright now, we may feel we’ve got there, although there is still a huge amount of bullying in school, young people are still fighting for their rights all the time, but we are trying to look further afield to other countries to see what is going on.

Has the gay clubbing scene grown and developed alongside Pride?
The early days of house are all wrapped up with the gay scene. I think both things have got more commercial. If I want to go for a good night out for house music I probably won’t go to a gay club night. But that is just the result of licensing changes and a lack of choice, as it becomes harder for those little DIY nights to happen. As soon as you could drink in a pub until 3am nobody wanted to pay £10 to go to a club anymore. Big productions like Wild Fruit: how do you put them on? I had a thought about the role of gay disco clubs the other day. They were real hubs; if you wanted to meet people they were the only place you could go. They have always been there to support the community. Now you can come into a straight place like this [we are sitting in Marwoods café] and get your Gaydar out, get your Grindr out, and see who is up for it.

So is this the end of niche clubbing in Brighton?
It was very different then. You didn’t need much money to put a club night on. Traumfrau, which is sort of a queer, quite lesbian heavy night, they have that attitude. It is so refreshing to see because they do just put them on in random little places. They don’t go and say, “Well the big clubs won’t let us in so we will give up.” They say, “We’ll just go and find somewhere completely unsuitable and put a party on and have an amazing time.” That’s the attitude we had in the early 90s and they have got it; so it is still there but it is harder to do.

What’s next for you and the lovely Queen Josephine?
I’m looking at writing up all the source material we gathered for the Brighton Pride exhibition and maybe putting it into a book so it won’t feel like a waste. And next year’s Pride, obviously! We are talking about looking at an even more global angle. Meanwhile me and the missus will be on air as usual at Radio Reverb with our Home Service show.