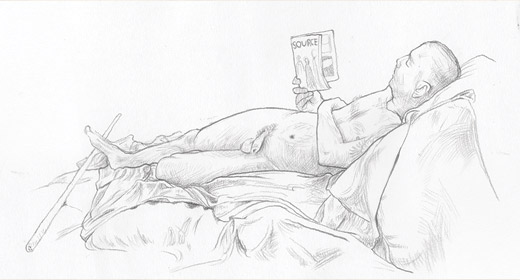 THE CONCEPT
We do stuff we’ve never done before and tell you all about it. Nick Coquet had never posed in the nude in front of a class of artists. Jake Spicer runs a life drawing class, which usually has female models – well, let’s redress that artistic balance.

THE REASONS
As an experiment in the concept of embarrassment, exhibitionism, body image and erection control, surely nothing measures up to the intimate scrutiny of the life drawing class. It’s almost a cliché in its undesirability for most people, but surely it can’t be that bad. Well, we’d see…

THE EXPERIENCE
I arrived at Jake’s class early and he talked me through the evening. A few quick two-minute poses, one extended 45-minute pose, then a few 20-minute sittings. Standing, sitting, kneeling, reclining. I put on a rather nice silk kimono, awaiting the arrival of the lucky students.

It turned out one of them was Kate Kamikaze, who painted our Bat For Lashes cover a while back. Another was Emma from Ophelia Fancy, our Christmas cover stars. I was meeting both for the first time, a SOURCE ambassador at a somewhat social disadvantage, in the nude under my shiny kimono. They weren’t bothered though.

When the 10 students were at their easels the kimono fell away, and there I was, naked as the day I was born. My first pose was standing. I remembered John Hurt as Quentin Crisp life modelling in The Naked Civil Servant, my only real reference point, and I’m afraid I struck a similarly theatrical pose – leaning on a pole with a hand on one hip. 10 people, 11 counting Jake, were now looking at my cock. Eight of them were women.

Gentleman readers will be aware of the natural preparation for public scrutiny of their cocks. You flap it about a bit to wake it up. But you can’t really do that in front of people. It’s just not socially acceptable. The same readers will also be aware that any sense of vulnerability can cause its cowardly retreat into the sanctity of one’s body, like a deep-sea mollusc or something. As the scratching of charcoal and pencil upon paper broke the uneasy silence, such concerns left me surprisingly quickly to be honest. Here it is, take it or leave it. Draw and be damned.

After those first few brief poses – stand, sit, kneel – came the lengthy sitting. I reclined on some black fabric arranged over some cushions, with the only prop I’d thought suitable to bring – a trusty SOURCE magazine, which I pretended to read. In the nude, as one often does. I stared at a page, reading it over and over until I couldn’t focus on the words anymore.

Before I did this people asked if I was worried about, ahem, enjoying it too much. I can only say that while at first my main topic of thought was my genitalia and a bunch of people staring at it, thankfully tumescence was the last thing on its mind. When you sit very, very still for that length of time you do feel it shift against your thigh from time to time – hey, it has a mind of its own at the best of times – but after a few minutes my mind was more concerned with my thumb. I was lying with the magazine held in a reading pose, held in one hand, my thumb supporting it upright. It wasn’t long before it was an incredible effort to keep it aloft. Cock? What cock?

The studio played classical music, conducive to artistic endeavour. It was impossible to time – pop songs chime in at a few minutes each so you can figure maybe an album’s worth is 45 minutes. After what seemed like 100 years Jake announced we had about 10 minutes left. After another half century the pose was complete. We were on to the now leisurely 20-minute poses.

These passed relatively quickly. I sat again, I stood again – arms folded and head on one side, like a bouncer. Defiant, I thought. Draw and be damned. The two hours were up, and I slipped backstage to put my clothes back on. We all sipped tea and chatted, the social equilibrium restored. Except they’d all seen my bum.

WAS IT WORTH IT?
Well, quite apart from the £20 Jake handed me for my troubles, yes, absolutely. The uneasy feeling about being naked passed almost immediately, as did any concern about penile perception. It came out looking quite respectable, I thought. I’ll almost certainly do it again.

Sometimes an article is a bit of a team effort, and those are tagged SOURCE Writers. If you’d like to be part of that team, hit the Contact link at the top and get your work on this website.
← PREVIOUS POST
Pope Joan (now Black Black Hills) Interview
NEXT POST →
New In Town: March 2010
Mailing List
Recent Posts
Website developed in Brighton by Infobo
Copyright © Brighton Source 2009-2020
SOURCE Virgins: Life Modeling - Brighton Source