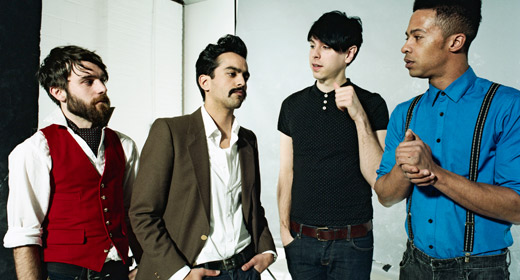 From day one we’ve had a soft spot for Pope Joan. An enjoyably scratchy post punk band who compliment their angular riffs with quirky synths, their songs rattled along in a whirl of slashed guitars and shouting. Their debut release, eight-track mini-album ‘Hot Water, Lines & Rickey Machines’ had a raw charm, especially the jerky chant along of ‘No TV’. All well and good, but if we’re honest we didn’t peg them for huge things.

Then ‘Centurions’ happened. Cock-sure electro pop with insistent guitar lines and a killer chorus, it showed that they could write songs – real singalong, stick-in-your-head songs. In our contributor-voted Best Of 2009 chart, only The Maccabees and Bat For Lashes polled higher. Now they were a very exciting prospect indeed.

“It was the first track we made after the mini-album and was the starting point of a new approach,” explains singer and guitarist Sammy Aaron Jr.
“It was a watershed moment really, what’s been has been and we don’t worry about looking back on it,” adds David Coomber, responsible for the bass and some of the synths.

What must have seemed like a big gamble at the time seems now like a pretty shrewd move. By throwing all they had at ‘Hot Water, Lines & Rickey Machines’ they’ve had to basically start again with a completely new batch of songs and, it turns out, a much stronger set.
“We took what was useful from it and left behind what wasn’t working,” David says.
“I think on the mini-album it feels like we were battling to all get our oar in,” adds synth/guitar playing Tom Windsor, “whereas now less is more.”
“Now we’re much better at letting the song breathe rather than putting in the part that we want to play,” reckons drummer Andre Millin.

New single ‘Dictator’ is probably their most stripped back, relaxed, song-like track yet. Gentle, but with that same tautness, it shows that their way with melodies works at speeds other than ‘breakneck’ – another sign that the band are growing.
“It was knocking about the same time as ‘Centurions’,” says Sammy. “It came together quickly on our second go at it.”

The new version has come from working with Cribs and Biffy Cyro producer Mark Williams in a strange, but cost effective, set up. Pope Joan self-record their stuff in practice rooms, bedrooms and The Freebutt and then send them to Mark for mixing. It’s a clever idea and points to their records getting even better when they move from a pro-am set up into full studio sessions.
“It’s working really well,” says Tom. “Mark brought a freshness to ‘Dictator’ because he really liked it.”

Another song the producer likes is ‘Volumes’, the b-side of ‘Centurions’, and he’s urging the band to let him re-record it and put it centre stage.
“I think we’ll do that with him and release it later on,” says Tom. “But we’ve got bags of new stuff as well. Influence wise there was a bit more of 50s twist, like a surf kind of guitar sound. It’s not quite as glitchy, but it’s got a glitch element to it.”
“I’ve been listening to a lot of the things I played growing up,” adds Sammy, “the blues things I loved like Howling Wolf and Bo Diddly as well as Buddy Holly. We don’t sound like that but it’s informing the songwriting. In the past we wouldn’t have wanted to put too much of that stuff in but all of a sudden I’m more comfortable with the things that have influenced me personally rather than what’s stylistically right for the band.”

Getting a hold of their influences has been a key part in the growth of Pope Joan. The band has always been a bit of a musical soup, but the elements could bang together.
“Everyone throws so many influences into the melting pot,” confirms Tom. “It’s really satisfying when they all work but it takes a bit more effort. Some bands start off with an idea of what they are going to do and it’s more of a focused, deliberate process. It’s been a lot more organic for us, which is why it’s taken longer to hit the nail on the head and get something that we’re all happy with.”
“We’ve finally learned how to gel our styles, bring in the right influences,” adds David. “We have a collective mindset now of what we are trying to achieve rather than just stumbling upon it,” Sammy admits.

It all bodes well for the album that Pope Joan are working towards for the end of the year. Eight songs down and a couple of singles on the way, they’re starting to sound like a band that could deliver a proper hit album, God bless them.