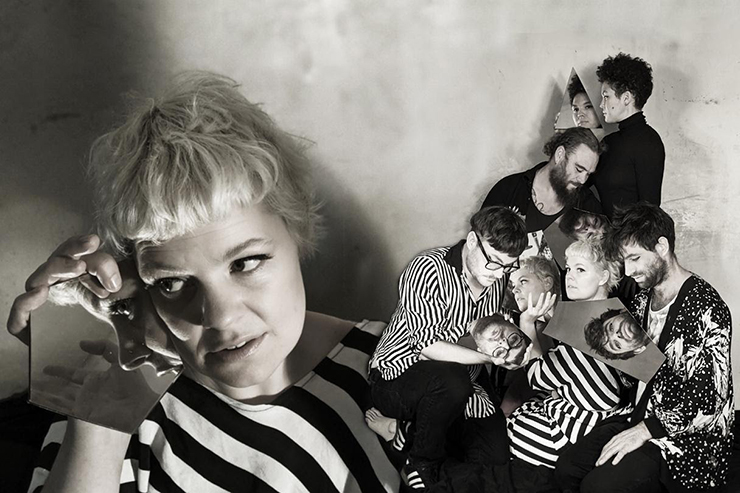 The summer releases keep coming. Bands are putting out their tracks regardless of the circumstances, almost like there was nothing else going on. In terms of music, there isn’t. So let’s dive in – this time we’ve got a run of new EPs from Youth Sector, Heights, Ciel and Abi Flynn, as well as singles from Terse Affection, Pulled Up! and Honeybadger. We’ve also reviewed Oddfellow’s Casino latest album and the first instalment of an epic project from The Moulettes (pictured above).

Pulled Up!
‘No Time For Dance’

It’s impossible to overestimate the influence of Talking Heads on the current music scene. Here’s a band that have not only created a song with the same jerky dance rhythms that graced ‘Talking Heads: 77’, but have taken their name from a track off the same album. Happily, ‘No Time For Dance’ isn’t mere pastiche. Set against a choppy guitar riff, frontman Tom Baker’s voice is appealingly fragile, the upbeat verses contrasting strongly with the emotional heft of the chorus: “I’ve never felt so desperate.” It might be no time for dance right now, but when that changes we’ll certainly be there to catch this bouncy post-punk band live. (PS)

Terse Affection
‘The Spring’ / ‘Still As The Night’

The tagging of this split single on Bandcamp as ‘country goth’ initially comes across like a healthy disdain for generic categorisation. But it turns out to be a pretty close description of this solo project from Sealings’ Michael Cotter. Here his music echoes the wonky darkness of artists like The Cramps and Women/Cindy Lee, and imagines them jamming in the shadows under a disco ball in front of an audience of extras from David Lynch movies. The guitars on ‘The Spring’ screech through the air like the ghosts of drowned surf rock bands, while ‘Still As The Night’ canters across the desert twilight like a zombie Johnny Cash escaping from a grave on Boot Hill. The ideal Mother’s Day gift. (GR)

Honeybadger
‘It’s All There For You’

Their name brings to mind a feisty, skunky wee mammal, but grungy three-piece Honeybadger’s sound inevitably draws comparisons with Nirvana. Their singer’s on-stage movements cut a very similar silhouette to Kurt Cobain’s, while their single ‘It’s All There For You’ is a dead ringer for ‘Nevermind’s’ heavier tracks, such as ‘Breed’. These are all good things, of course, and Honeybadger do make an enjoyable racket. The video, meanwhile, is worth checking out to see them larking about outside Dockerills alone. Just don’t get them mixed up with the Greek rockers of the same name. (GR)

Five-piece Youth Sector have chosen ‘Hands’ as the single from their EP ‘Mundanity’. They could have picked any of the four tracks; they’re all that strong. ‘Real Estate’ is an upbeat slice of fun, the suburban tedium of house prices and decorating undercut by a fantastically catchy chorus. In ‘Happening’ “it’s all unravelling”, yet the bleak sentiments are similarly leavened. The infectious energy of ‘No Fanfare’ – a Gang of Four meets The Knack confection – must be irresistible live. And then there’s ‘Hands’ itself. The funkiest of the four tracks, this bass-driven song bounces along towards an impassioned crescendo. This is a band bursting with talent! (PS)

Singer-songwriter and producer Heights’ eponymous EP consists of three introspective tracks. Her soft voice is set against a wash of spare electronica. ‘Hell Bent’, with its arpeggios and metronomic drumbeats, is perhaps the danciest. In ‘Silly’, yearning lyrics and a strong melody are buoyed up by another hypnotic beat. Last up is our favourite, ‘(Will I Be) Waiting Forever?’ Reflective and delicate, but with a powerful sense of drama, the track swoops and dives gorgeously as she muses over the question in the title. Lockdown has clearly left its mark: Heights has embraced the solitude and produced something rather special. (PS)

Ciel’s current EP ‘Movement’ (available through the usual online suspects plus ‘catch it while you can’ vinyl via Box Bedroom Rebels) captures a band gaining momentum. Revolving around the reflective songs of Michelle Hindriks and recorded by Jack Wolter (Penelope Isles) in his magical bunker, the release shows Ciel bringing something of their own to the alt-pop whirlpool. This is what you get: the breezy melodic ‘The Shore’ rising and subsiding on a wave of glistening synth and guitars; the surging power and unstoppable catchiness of ‘Days’; the jangling wooziness and musical switchback of ‘Same Old Times With U’; and the dreamy last dance of ‘It’s Not All The Same’, all mirror ball and tears. There’s a sense of clear purpose and direction about Ciel’s deftly crafted muscular electro-pop on this EP – they’re going places… (JP)

Brighton is not much hyped as nu-soul central but things might begin to turn around with Abi Flynn’s new EP ‘Get Deep’. Once of Tru Thoughts and now on Incognito’s Bluey imprint, Abi delivers some slick and crisp r’n’b on this release, topped with her exceptional, ‘have no fear’ vocals. It’s not just her effortless shifts from jazz flavours to deep soul that impresses but the emotional intensity of her singing. Catch the track ‘Courage’ for proof, a powerful downtempo ballad fired by her own recent journey through serious illness and into parenthood. Elsewhere there’s plenty to keep you on your toes from the bump and funk of ‘All The Best Things’ to the rampant disco swing of ‘Storm Before The Calm’ which demands a Jay Kay twirl. It’s all there waiting to be discovered on ‘Get Deep’ before one of those smooth DJs claims the strike. (JP)

Neolithic landmarks, solstice rituals and supernatural entities are just some of the themes woven into the eccentric tapestry of David Bramwell’s latest offering. He might be better known to some as an author, journalist and the host of Brighton’s Catalyst Club, yet Bramwell has been quietly releasing leftfield and beguiling music like this for twenty years. ‘Burning! Burning!’ is the band’s seventh studio album, and there are two more releases coming later in the year. The songs here are leisurely and meditative, featuring esoteric stories set to a kind of softly psychedelic dream pop. ‘Leave Behind’ is a flowing instrumental overlaid with snippets of Bramwell’s real-life neighbor talking about the poltergeist in her house. The following track, ‘Where Are The Memories Of Henry Sargeant?’ came to the songwriter in a dream, possibly as an answer to the mystery next door. (BB)

Hannah Moule And The Moulettes
‘Idiolect’

The Moulettes have changed. Not only has their name expanded to reflect the creative role of the group’s only remaining founder member, but the line-up has swelled for this release with scores of musicians recruited from Brighton and beyond. ‘Idiolect’ is comprised of five versions of the same song, each radically restructured with a different arrangement: electric, strings, horns, a cappella and electronica. It’s an ambitious and high-concept project, but whether this experiment helps you to “consider the concept of communication” is secondary, as the music itself is both fresh and intriguingly complex. While the version of ‘Idiolect’ with strings might be closest to the Moulettes sound of old, the alternative a cappella rendition fizzes with lush layers of harmony and innumerable odd mouth sounds. But flagging up our favourites seems beside the point since the format presents a kind of ‘choose your own genre’ approach to listening. In theory, there’s something for everyone. Further five-part installments are due every month. The follow-up ‘Attention’ comes out tomorrow. (BB)

Sometimes an article is a bit of a team effort, and those are tagged SOURCE Writers. If you’d like to be part of that team, hit the Contact link at the top and get your work on this website.
← PREVIOUS POST
Lost & Found: Electrelane
NEXT POST →
Now Open for Live Events: Brighton Open Air Theatre
Mailing List
Recent Posts
Website developed in Brighton by Infobo
Copyright © Brighton Source 2009-2021
Locally Sourced, Aug 2020 - Brighton Source