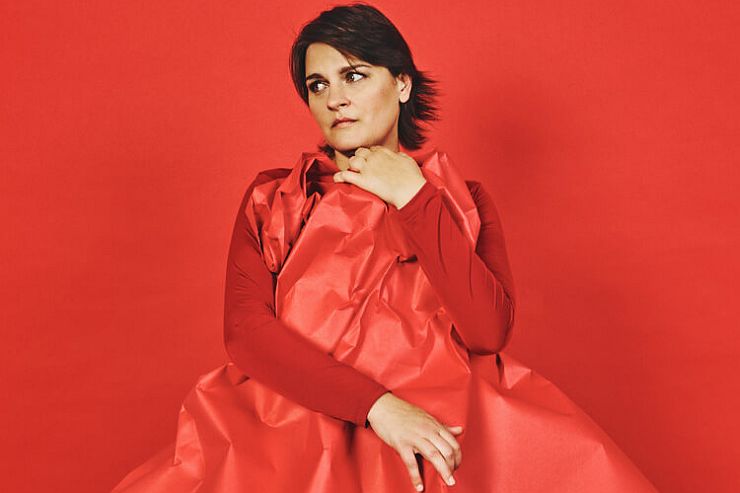 Madeleine Peyroux has been making great vocal albums covering a range of styles for almost twenty five years. She’ll be performing on Sunday evening at this year’s Love Supreme Festival and we spoke with her about her politically-charged latest album ‘Anthem’.

Congratulations on the new album (Anthem). I understand it was written in sessions with Larry Klein, Patrick Warren and David Baerwald – How important is collaborative writing for you? Do you prefer it to writing alone?
As much as I love writing, the truth is I never finish a song unless I have a collaborator to help me let go. I seem to either have very grandiose ideas about what the song should be but I’m not ready to let it go or I simply don’t have the skill set to map out clear ideas on how to finish the song. So many of the songs I’ve recorded that I’m a writer on started off as a few rough ideas that I’ve laboured on sometimes for years before finally giving in to seek out someone to work on it with me. Although this record was not like that.
This was the first time I’d sat in a room with four other people and we were pretty much coming up with ideas on the spot. The bases of the songs were originally internal because somebody would say “what about this?”. On the first day I said I’d been thinking about doing a song about the downward spiral of what happens if you get in financial trouble in America and I said I just want to hear a descending chordal progression for “down, down, down on me” and Larry Klein said “OK sure” and as I was open-minded about everything he spearheaded a lot of the energy and helped to organise us all.
With the song ‘Lullaby’, this was a bass line that Larry had been speaking about previously and I had a vision of what the music was, which was a refugee in a boat, then Baerwald wrote the lyrics from top to bottom. So every song was different, for example, ‘Ghost Of A Tomorrow’ began as a Patrick Warren chord progression.

Larry is something of an icon as a bass player and producer – how did your working relationship begin and how does he inspire you?
In 2003 I hadn’t made a record in seven years and had been working on a few songs here and there and had signed to Rounder Records who’d suggested three or four producers for me to work with. One of these was Larry Klein who I called and asked point blank “what sort of a record do you think we should make?” and he said “I want to make a record that sounds like a dream of a record”. I thought that was quite deep and it wasn’t until after we’d made the record and put it out that I started to understand what he meant. He has an impressionistic approach to jazz and he’s really been a big part of my life.

So you must have complete faith in him?
Absolutely! But I do like the fact that he is willing to discuss ideas and lets me question them and vice versa and sometimes we end up with a stronger result than we would have. When we made the Ray Charles tribute album, ‘Blue Room’, he originally wanted to reprise the songs from the original record but I suggested if we took some contemporary songs, and what Ray Charles did with country music, we could look at a female perspective of these male songs and then blend the ideas through the character of the singer, and he was glad that we chose that route. There’s an aspect to working with Larry that is definitely evidence-based. He pulled it off.

You cover the Harold Arlen torch song ‘Last Night When We Were Young’ on the new album. Did you know this from the Frank Sinatra version?
There are a number of versions but I only heard Sinatra’s when I was researching the song. I think the Judy Garland version was the one I knew. It always seemed clear to me that the song has this very strong crescendo towards the last verse which tended to be dynamically loud and I always tend to look for the more internal reading of a song and so, in that sense, we thought it would be a good idea to take a look at what we could do with it with the opposite approach to what had been done. To find the story of somebody who is aware of so much regret that they are only finding hope at happiness in their memory. We thought that it would be a very fitting inclusion on a record that’s full of songs on contemporary life.

Have you ever considered recording a songbook album devoted to a single composer like Ella Fitzgerald famously did?
I would but there’s never enough time plus Ella did it so well. I think the trick right now is, instead of focussing on styles, is to focus on what needs to be said. The climate of the world we are in now, compared to when I first started working with Larry in 2004, is so completely different. My first record was in 1996 and I think there was a lot of 20th century music that was worth covering in the context of social problems. Now, I still love that music but I also see the importance of writing new songs that are completely different, completely modern.

The Ghosts Of Tomorrow has a real saloon song feel about it. Was this your intention when writing it?
We wrote the lyrics and the story that came out was about saying goodbye to old ways of living and to losing some compatriots. The song for me was more of a funeral song than a saloon song.

The whole album has political themes running through it. Do you feel you should be making more social commentary in your music?
The thing is for me it was always that way. I’ve always been convinced that music is a political statement, in the very purest sense. There’s something political about standing up and telling a story. I think that what changed for me was from touring the world and meeting people I get more and more obsessed that the songs are not addressing the issues of the day and that’s what drove me to make this record.

There’s a beautiful cover of Leonard Cohen’s ‘Anthem’ and I wondered if you shared the song’s idea that humanity will prevail?
I do and Larry Klein and I have had this conversation many times as to whether things can get better. Frankly the reason that that song became the title track for the album is that it was one of the only rays of hope I had throughout the making of the album. The song itself gave me hope at a time when I was very depressed right after the (US) election.

The album ends with Paul Éluard’s ‘Liberté’. Was this an obvious choice to close the album?
We’d started making that recording about a year and a half before this album and it wasn’t until later that we decided to include it as it was a great match for the other songs. I recorded it for a documentary about a particular form of Muscular Dystrophy called duchenne muscular dystrophy which is quite tragic. The song became a poetic anthem that is included in the narration. It’s one of the most recognised poems of French culture nowadays. Apparently Paul Éluard had somebody print up copies and drop them from lamp posts in Paris during the Vichy government.

Do you still have family in Paris?
My mother is still there. She’s the reason that I got into music and I get to visit once or twice a year. She lives in Montmartre which still has remnants of the old Paris whereas some areas are just too rich to enjoy it. Over in the Latin Quarter where I cut my teeth playing music on the street and meeting musicians it’s now not always affordable to go there.

You went to a boarding school in Littlehampton in your teens. What are your memories of that?
It was wonderful. The school was called Rosemead. Before that I was at Public School in New York City with huge classes of 40+ kids and a teacher just going through the motions of the state curriculum. But when I went to Rosemead they had a great art class where I learned to paint, I studied clarinet and piano and loved the geography class which we don’t have in the US. We put on a play where I improvised, getting a few laughs and a severe telling off. After a while I felt quite stunted, as if the walls were closing in on me, so as I’d already met some street musicians in Paris over the Summer break and started singing and was in love with the life, I ran away from the school to join them.

Which led to bigger and better things.
There’s no 20-20 hindsight in my life, there’s just what happens.

Do you adjust your sets according to where you are performing?
Yeah, I do. I very much enjoy playing the new album in the UK because I feel the humour and subtleties of the lyrics are understood and I get more interplay and jokes from the audience that I can include in the show. I try to tailor it to the city but it’s tricky going to different countries but speaking English is a good thing. And of course I absolutely adore Brighton. A lot of my friends are there and it’s one of the oases of culture, just like a few places in the United States. I look forward to having a very warm and brilliant group of people in the crowd. I’m very pleased to be coming back and will probably not want to leave.

We look forward to seeing you at Love Supreme. Enjoy the rest of your day.

Thanks so much Steve.