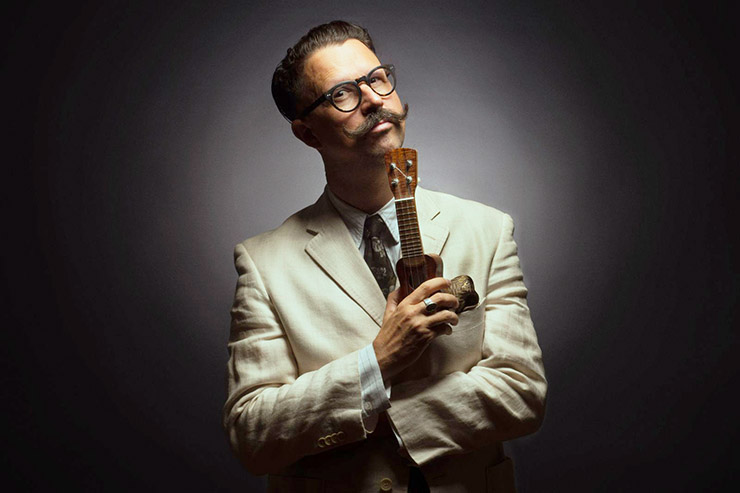 Mr.B The Gentleman Rhymer On His New Brighton-Based Video

Brighton and Hove’s chap-hop representative Mr.B The Gentleman Rhymer dropped a new track this week – a characteristically polite re-imagining of MIA’s ‘Paper Planes’. Rather than threatening to “take your money”, Mr.B’s version promises us a “nice cup of tea”, which we think you’ll agree is a considerably more civilised proposition.

Shot in Kemptown, his “promotional videogram” for the track, entitled ‘Paper Plates’, features the Gentleman Rhymer lobbing out tea and scones from a vintage pie van, opposite the Hand In Hand pub. It’s like a clotted-cream-fuelled drive-by. We’re not sure what’s in those scones he’s serving up, but one of his customers appears to be a muppet version of himself.

And it appears he enlisted help from some other mates to shoot the ‘Paper Plates’ video. “My friend Jen runs the Hand In Hand,” he tells us. “And my chum Al The Pieman owns a pie van. I wanted to do a pastiche of the MIA video, so this seemed like the perfect spot. Plus they had a parking space – not something it’s easy to find in Brighton.”

So what else is in the chap-hop pipeline? “Mr.B’s Christmas bash will be at the Prince Albert on Friday 14th December,” he says. “I’ll be playing some favourites from my Christmas Album such as ‘All I Want For Christmas Is An Original Jawa With Vinyl Cape’ and ‘I Saw Your Father Beat A Man To Death In Tesco’s’. I have a propensity for long song titles.”

The dapper polymath has also written and illustrated a novel, called ‘Roast Beef’. “It’s largely about Mr.B assembling his crew (as seen in the video) to defend the honour of chap-hop,” he continues. “Think hip-hop P.G. Wodehouse”. Well, that’s just the icing on the Christmas cake.

Competition: Do you have any additions to our list of cake-based hip-hop DJs? So far, we’ve come up with Jam Sponge Master Jay, Pete Rock Cake, Magimix Master Mike and Afrika Battenburga. The winner will receive… big respect from Mr.B.

A magazine journalist and former BBC minion, Gaz's words can be found in publications ranging from The Radio Times Guide To Films to 1001 Songs You Must Hear Before You Die, as well as on his blog The Wine Ninjas . He plays drums in a psych band, and once fell into a frozen lake in Transylvania.
← PREVIOUS POST
The Lucid Dream Review
NEXT POST →
Filthy Pedro Presents: Christmas Antifolk Special
Mailing List
Recent Posts
Website developed in Brighton by Infobo
Copyright © Brighton Source 2009-2020
Mr.B The Gentleman Rhymer On His New Brighton-Based Video - Brighton Source