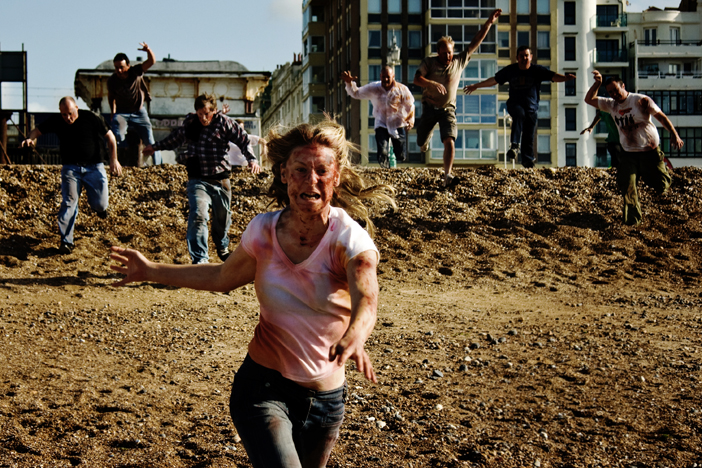 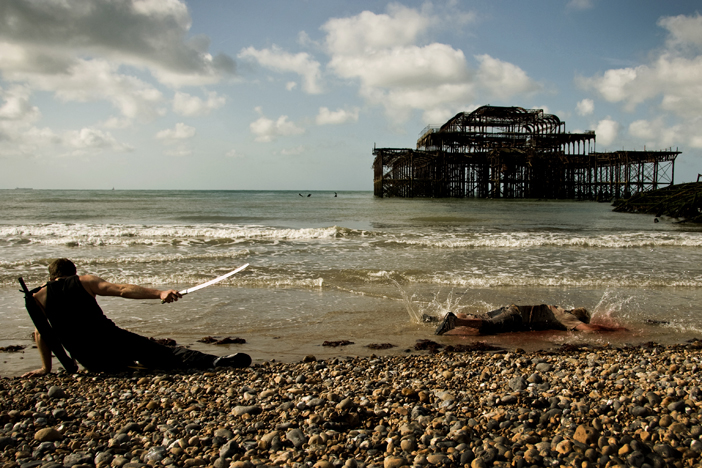 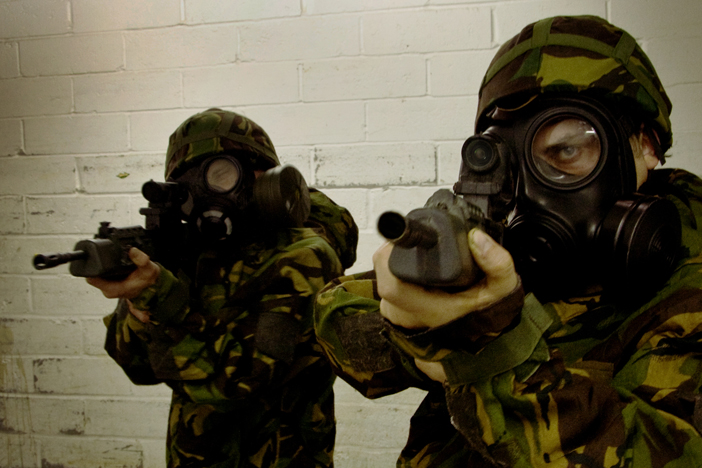 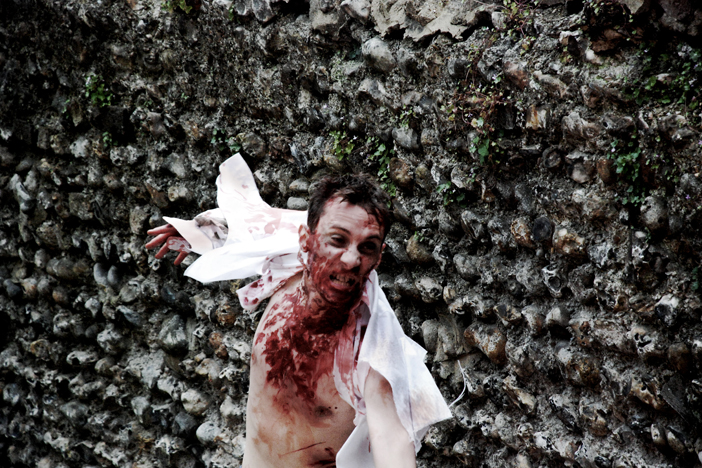 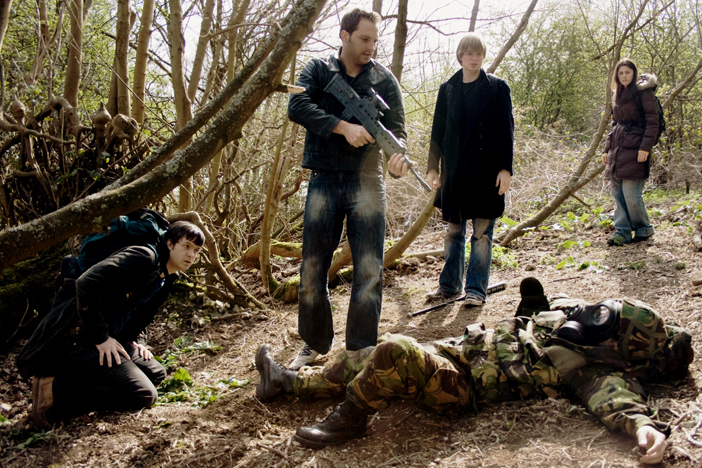 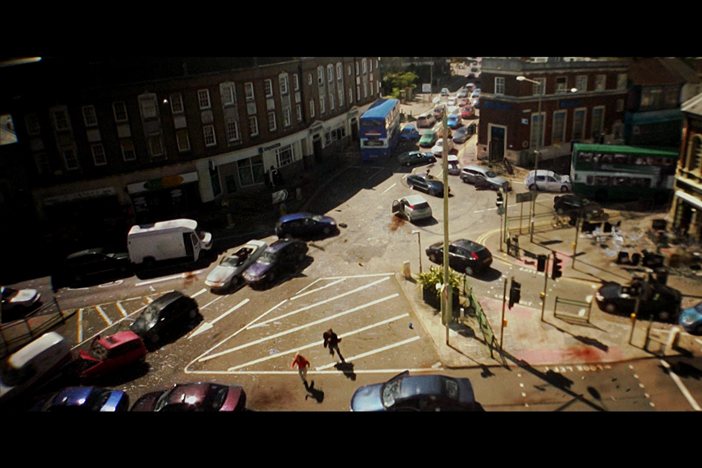 Brighton’s zombies have inspired an adventure book, a board game and an annual fancy dress parade – now they’ve even got their own feature film.

We’ve all done it. Waking up on Brighton beach feeling terribly confused and unable to remember how we got there. No matter how bad the hangover, at least you weren’t chased around town by a load of squaddies and braineaters. That’s what happens to Dan, the lead character in new British horror film Darkest Day. Made on a shoestring by former Sussex students the film was shot in and around Brighton over the course of eight years. It’s finally finished and is being premiered at the Duke of York’s on Monday. We spoke to director and actor Dan Rickard.

Without giving too much away, what’s the plot of Darkest Day?
A man wakes up on a beach with no memory. He discovers the ruins of an empty city ravaged by a deadly virus. After being savagely attacked by a psychotic stranger he is taken in by a handful of survivors, but Dan’s arrival starts to divide the group and arouse suspicion. It soon becomes clear that the army are hunting him down and the group are forced to evacuate the safety of their home, embarking on a dangerous journey to escape. As fragments of Dan’s lost memories start to return, and with soldiers in close pursuit, he starts to realize they are in even more danger than first thought. With a race against time, tough decisions need to be made to ensure a chance of survival.

How did you make a feature film with no budget? How did it all start?
I can’t begin to tell you how many hours of work went into every minute of the film. It started as a collaborative project by a small group of friends whilst I was at Sussex University. It was originally only a short film and was supposed to be completed within a few months……….. 8 years later after a huge amount of work we have a finished feature film. My main background is in visual effects so the film started really as an excuse just to do a lot of that. By the end, I found I was far more interested in the story and the characters, which is the important stuff really.

Why did you choose Brighton as the setting for the film?
It was definitely easier to shoot in Brighton, as the film was made for no money, and we only had limited transport so 95% of the film was made within walking distance of my house, and many of the scenes were shot in my house (to the dismay of my house mates). I’m a huge fan of 28 Days Later, and so wanted to create a similar sense of atmosphere, but in Brighton rather than London. Brighton really is a great place to make films as there are so many great and varied locations, even when ignoring the obvious landmarks.

There’s a shot in the trailer showing Preston Circus strewn with wrecked cars. How did you pull that off?
We were meant to shoot that shot very early in the morning, but by the time we came to shoot, it was pretty much rush hour. We had to run across the road in the split second between the traffic lights changing, so was a bit hairy. We filmed from the top of the fire station, which was an unexpected bonus, since we only asked if we could at the time, and they very kindly took us up there. Afterwards, I painted out all the people and cars on a computer, also adding new damaged cars, and general destruction. It was basically a Photoshop job.

Are there any other bits of Brighton we might recognise?
We filmed amongst the wreckage of the West Pier, on the day with the lowest tide, and so were able to get very close for a short amount of time. That was fun, and looked great. A few months later they sent the bulldozers in and removed that section of wreckage, so I’m really glad we captured it on camera when we did. We also filmed at Stammer Park for an intense zombie scene with loads of extras, which confused the dog walkers somewhat…

Where can people see the movie?
We have recently signed a distribution deal and will be having a UK DVD release in May as well as a limited cinema run. In Brighton, the film is showing at the main Duke of York’s cinema on Monday 27th April at 9pm. We are also likely to release in many other parts of the world, which is exiting. I’m looking forward to the possibility that they may dub the characters into another language. That will be hilarious.

What was the most difficult scene to film?
Strangely enough, it was the simple scenes where people talk to each other, such as the exposition scene where a lot of the plot is explained. We shot that three times to get it right (ish). People seem to think that the big action scenes with lots of extras are the hard bits to film. That stuff is easy when you know what to do, as it will always have a certain pace and excitement to it in the final film. But put two characters together in a room to have a conversation, and trying to make that conversation interesting to an audience, that’s the hardest thing as a director. Having said that, if you get those scenes right, it will make the action 100 times better if you actually care about the characters in danger. So really the simple scenes are the most important. Hopefully we got some of that stuff right.

Are the zombies slow stumblers or hyperactive sprinters?
Fast running zombies. I wanted to make more of a cross-genre film, with a lot of fast paced action, and so slow zombies wouldn’t have worked so well. Sorry slow zombie fans…

Ben Bailey is the editor of Brighton Source and a freelance writer. He also plays in a few bands and can sometimes be found giving talks on a variety of niche topics. He lives in Brighton and rather likes it.
← PREVIOUS POST
Marc Almond Review
NEXT POST →
Mantras Photos
Mailing List
Recent Posts
Website developed in Brighton by Infobo
Copyright © Brighton Source 2009-2021
New Zombie Movie Set In Brighton - Brighton Source