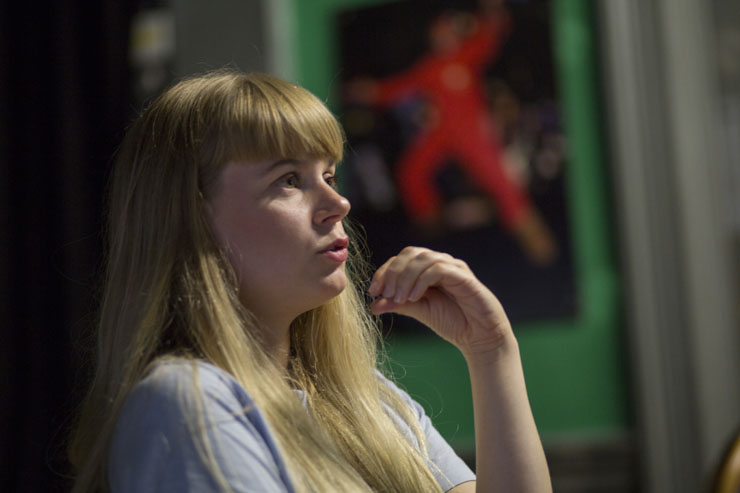 Peakes have been on our radar since the 2017 release of their excellent ‘Space’ EP, and we were looking forward to catching them live this September. Sadly, Covid 19 put paid to that gig – so when we hear that some of the band are in town, we take the opportunity to get together to talk about their music, their plans and to get an insight into what it’s been like for them during lockdown.

We meet up early evening in the top room of the Prince Albert, the venue for their postponed Brighton gig. “Music is the beating heart of the Albert”, the venue says of itself, yet since the stringent measures were imposed back in March, there has obviously been no live music. The stage is bare, dust has collected, a cobweb glints in a corner; there are tables and chairs on the floor where, in more normal circumstances, a crowd of eager punters would be gathering.

Vocalist Molly Puckering, who is from Brighton, and St Helens-born synths player, Maxwell Shirley, are two thirds of Peakes. The third member – drummer Pete Redshaw – has not travelled south this time, “but definitely will when we do play here,” Molly assures us. The three of them originally met at Leeds College of Music. That was seven years ago. Having completed their studies, a career in the music industry was their preferred option, and Peakes was born.

Their influences are many and various. Max cites Little Dragon, Beach House and The Cocteau Twins; Molly adds Goldfrapp and Portishead, and both of them chime in with “and Wild Beasts” – a band whose producer, Richard Formby, they have worked with. Max goes on to say that, growing up, he was exposed to everything from Rage Against The Machine to Stock, Aitken and Waterman’s cheesiest pop classics. The result of this disparate input is a new-wave, post-punk electro pop that is becoming more inventive with every new release.

Not that Peakes got off to a bad start. ‘Space’, was a superb calling-card. Opening with the sparest of synth motifs, it slowly builds to a euphoric climax. It, like many of their songs, has a meditative lyric that deals with isolation, introspection; with broken relationships and lingering memories. “Did it hurt you like it hurt me? I can’t block you out.” Superficially the tale of a couple breaking up, the accompanying video – directed by former Woman’s Hour singer, Fiona Jane Burgess – takes it to a whole new level. Switching between a claustrophobic cityscape and open mountaintops, two male dancers explore friendship and vulnerability. “For a first video, I’m well proud of it,” Max says – and with good cause.

The setting – the Lake District – is itself apt. Both Molly and Max agree that they are inspired by wide open spaces, be it the rugged Dales of Yorkshire or the rolling hills of the South Downs. It is no coincidence that one of the few songs they have covered is Kate Bush’s ‘Running Up That Hill’ – nor perhaps that, even though the name is in the family, they decided to call themselves Peakes.

Throughout 2020, new tracks have regularly appeared, culminating in a four-track EP, ‘Pre Invented World’, released in June. It is their strongest work to date, the songs combining that same bouncy pop sensibility, but with a lyrical depth that sets them apart from some of their contemporaries. ‘On The Other Side’, for instance: “We drift through the motions of a settled life, dissolve our senses and await the tide… Pull me through another direction; it’s a clear view on the other side.” While our favourite, ‘A Sacred Place’, opens with the evocative, “I’m an open air museum, take a look inside my head”.

With so much new material, it seemed as though the band had been busy through lockdown. When we probe, however, the truth is a little different.

The tracks, they reveal, were recorded last October with MyRiot, aka producers Tim Bran and Roy Kerr, the latter having a studio in London’s RAK Studios. Interestingly, Bran and Kerr share songwriting credits with Max and Molly, and we ask about this. It transpires that this is as a result of the way they write songs – or rather how they used to write songs – pre-lockdown.

“It’ll often start with a synth idea,” Molly explains. Then, when they have a few promising lyrics, a snatch of melody, they split up. “We make progress by not being in the same room,” Max explains. “Melody, lyrics worked on separately. Then we piece it together later.” “Plus, we always work on several ideas at the same time,” Molly adds. “When you’re in that creative mode, there are lots of ideas. If you can’t get one idea finished, it’s best just to move on. Let your subconscious work on it…”

It’s a songwriting process that works. They ended up with several loose demos, some of them simply piano and vocals. Then Pete Redshaw added drums: “real drums”, which make the songs so much accessible than the rhythmic precision of a drum machine. And later, down in London, Roy and Tim add their contribution, until the finished result emerged. It reminds us of how the Beatles once worked, with George Martin in the studio ‘revealing’ the song lurking inside a Lennon/McCartney original idea.

Then lockdown happened, and everything changed.

“We knew we wanted to keep writing and be productive, but it was all a shock,” Molly admits. They had instruments, but there was no studio. In addition, they couldn’t see their drummer, Pete, who lived outside Leeds. “It meant that during lockdown, we – Max and I – ended up finding out that we just had to rely on ourselves.”

The way around this was for Max to do all the production himself, getting the new tracks to as high a standard as he could, then forwarding them to Pete, who had set up a studio in his house in nearby Mirfield. “So, without meeting up with him, we were sending him stuff. He recorded the drums… Plus our friend Josh; we were sending ideas to him – in London – and he was laying down the guitar. We’ve written and produced two full tracks during lockdown. And they sound really good.” There is a pause. “Given the difficulty of being isolated.”

It is something we have heard from many creative people over the last months. Artists of all kinds – be they writers, musicians, painters or potters – have had to deal with the challenge of social distancing. In an earlier interview, Molly pointed out that “for a lot of people my age, we feel quite powerless and without control of our future. Making music feels like the only thing we have full control over.” It is a telling statement, but one she now feels must be amended. The future has spun even further out of control. “For a musician – for anyone in the arts – lockdown has been a really scary time.”

Furloughed from their normal jobs, Molly and Max had more time on their hands. But that in itself proved to be a difficulty. And why? It is the old cliché of ‘the tyranny of the blank page’. Suddenly, there was indeed a lot of time to work on projects – but it was an uneasy time, an uncertain time of indeterminate length and strict, ever-changing restrictions. And for most artists, creativity cannot simply be switched on.

“I remember at the start,” Molly confirms, “everyone kept saying, “Oh, but it’s the perfect time. You’ve got months to be creative…” “I just don’t respond to that though,” Max breaks in, “It’s forced.” Molly nods. “And I’m not going to feel creative when I’m being forced to stay in.”

Yet it was not all bad, as Max goes on to explain. “Luckily, when lockdown started, we already had a couple of songs that we loved, and hadn’t recorded yet. They kick-started our time. We were able to be creative because we had bits of ideas. We finished writing songs that already existed; we recorded them, added the sounds. That was how we were creative.”

“Everything is so different now,” Molly says with a sigh, and the conversation begins to see-saw. “It’s been difficult, not being able to practise as a band,” she explains. “We haven’t seen Pete now for six months.” “And yet it went better than I thought it would,” says Max, “doing it all on our own. I mean, it’s really fun going into a studio – but it can be stressful. Having paid for the time and the studio space, there’s a real pressure, which sometimes can be a negative thing.” “You’re there to work and need to focus. Whereas if you’re home and on your own…” “But then it was like, why are we even making this? Who’s ever going to hear it?” “Though the EP’s doing okay.” “But I think we’d have felt much better if we could have gone out and promoted it as well…”

Which brings us back to the postponed gig at the Prince Albert. It will happen, just not yet. April 2021 has been pencilled in; their first gig in Brighton since their Alternative Great Escape appearance last year. Finally, they’ll be able to play live, to promote that EP released during lockdown. They will also be playing those two songs – the ones that proved that, even in such difficult circumstances, their creativity couldn’t be crushed.

We ask the titles of these new songs, and they laugh. “Untitled 1 and 2 for the moment. But they will have names.” They look round wistfully at the empty stage. “We can’t wait to play live again.”

And we can’t wait to see them.