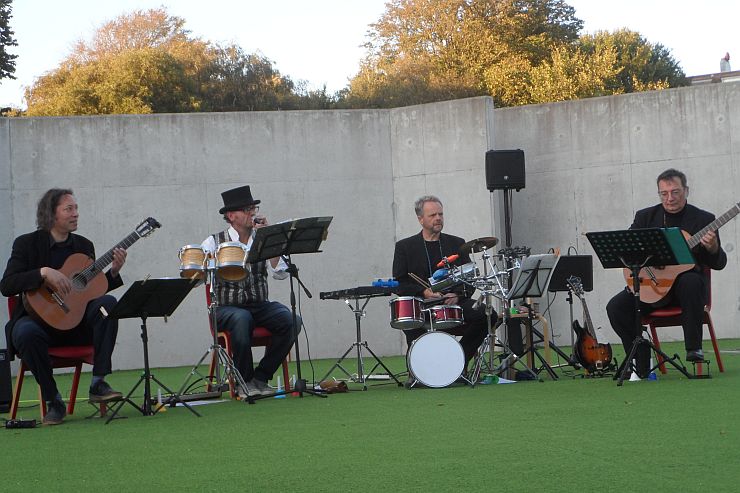 With gig-goers chomping at the bit and tours still getting bumped to next year, some comfort can be taken from a few outdoor and socially distanced events cropping up on the seafront and in Kemp Town. However, help is at hand. BOAT (Brighton Open Air Theatre) has re-opened for comedy and theatre shows but also a couple of actual gigs. Following a rainy jazz double-header in mid-August, an optimistic crowd assembled last Saturday evening for a rare performance of Trumpton Comes Alive, last seen at this venue back in 2015.

The weather gods were smiling on the good people of Trumptonshire as the rain clouds cleared and the sun shone brightly on the amphitheatre.

They began with the Camberwick Green opening theme, “Here is a box, a musical box…” which always announced who the episode’s featured resident would be. This was followed by Trumpton’s clock theme both of which highlighted the skill and detail from percussionist Tom Arnold and guitarists Adrian Oxaal and Stephen Wrigley in bringing Freddie Phillips’ complex compositions.

At the helm of the original series was Brian Cant as narrator and singer and in Glen Richardson we had an uncanny recreation of Cant’s soothing pronunciation and playfulness – like a warm blanket after walking home from school on a cold rainy day. This was no mean feat given the affection held for the late actor ubiquitous on kids’ TV in the 60s and 70s, whose Dad, we were informed in one of several Cant facts, was a champion roller skater.

Over two sets we were treated to songs detailing the daily doings of Murphy the Baker, Bill Sticker Nick and the housewives’ favourite, Windy Miller. With the songs clocking in at less than two minutes the show was as crammed full of goodies as a Ramones set if a little less frenetic.

All the favourites were included with ‘Time Flies By (when I’m the driver of a train)’, ‘PC McGarry (number 452)’ and of course, ‘Pugh, Pugh, Barney McGrew, Cuthbert, Dibble, Grub!)’, alongside contemporary commentary reflecting that the demographics of Trumpton, Camberwick Green and Chigley make Poynings look like Deptford, and how different the songs would be if performed by Leonard Cohen, an example of which was an unexpected surprise.

The show ended with the Firemen’s band concert theme and a reprise of the Camberwick Green theme. After six months of no gigs this was a wonderful reminder of childhood heroes and a welcome treat for kids of all ages.