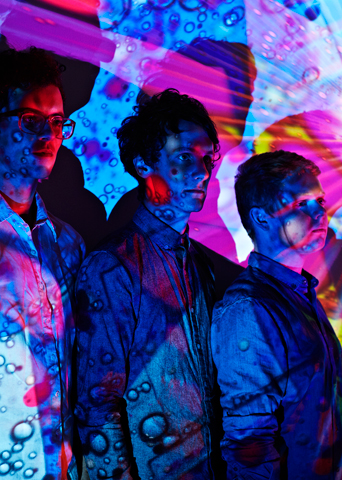 It’s said that some people are born old and stay that way for the rest of their lives. The Physics House Band might be in their early 20s, but not for them a life of drinking shots at Guetta-powered pop nights. Oh no, they’d much rather be giving their jazz fusion albums the concentration they deserve and practising being really very good at their instruments.

Unfashionable notions of musicianship are at the core of their live performances but let’s be clear here – The Physics House Band are not chin strokers. In fact they’re one of the most exciting new bands to take to the Brighton stage in recent years. Adam wrestles with his bass like he’s in a funk band, while Dave flails on the drums chaotically and Sam leaves no part of his keyboard untouched. And the sounds, wow, the sounds!

An assault on the ears that can still make you dance, they come on somewhere between the psychedelic explorers of the 60s, the prog bands and jazz fusion artists of the 70s,  the technical metal of the 80s and the post rock of the 90s – all with the 21st century precision of math rock. If you thought The Mars Volta were coasting then you’ll love The Physics House Band.

They play so fast and so frenetically that you struggle to keep up but, caught in their tractor beam, you just can’t get away. There are few bands that have such a live pull in Brighton this early on in their careers and with material this difficult. They’re absolutely stunning and have already picked up fans of all gig-going ages. They’re a popular support act with promoters because of the big crowds they bring with them.

“We’re not trying to exclude non-musicians, which is why we try to put on a really exciting show,” explains Adam. “So we write stuff that grooves, stuff that the layman can still kinda go and nod their head to. You don’t need to think, ‘Shit they played something in [a time signature of] 19/32’, but can still come away and say, ‘That was really cool, what the fuck happened? I enjoyed that.’”

And enjoy it you will, muso or non-muso, as the trio throw themselves into playing so hard you’re not sure if they’re going to break themselves, the sound barrier or your ears. There’s no doubt they’re completely out on their own in a way we haven’t seen since AK/DK.

“There’s no trend there because for a start the music is instrumental,” says Sam.  “Our passion is to make music with no shelf life, as well as not attaching to a trend.  I suppose the name reflects that.  It’s Physics because the elements of physics are sound, heat, light and electricity – all the things that come in to music performance, not, you know, fashion and things like that.”

More than anything, watching The Physics House Band makes us glad that they found each other. Like how, say, the Pixies were meant be together, we can’t imagine this trio tolerating playing with anyone else. Sam has a history with the precision of classical and jazz, while Dave has been playing the drums for 14 years and Adam, whose dad was a musician, has always taken the director role in bands.

“It’s good to be able to give someone an idea and they’ll take it and make it better,” says Adam of his current bandmates. “You think, ‘Fuck, I didn’t even think of doing it that way!’ They’ll do it immediately, better than I thought of, which is really, really satisfying. It’s difficult to find in musicians this good.”

“It’s very rare for drummers to get to go crazy with fills,” smiles Dave, “or just try and do the most complicated stuff. You usually get told to calm things down or be quiet, whereas these two promote the madness.”

With so much musicianship going on it’s little surprise that there’s no room for vocals in The Physics House Band songs, but initially the trio played as part of a five piece with a guitarist and singer, who didn’t fancy playing one of the gigs they had lined up. Instantly, the split band just seemed right and instrumentals were the way forward.

“We try to write musical parts that are expressive enough to take the place of where lyrics would have been,” explains Adam. “So we have something that would evoke the same kind of emotion or feeling as a lyricist. Sometimes it works and sometimes it doesn’t. I guess when you go for stranger sounding things, they take you to the stranger places which a vocalist would usually guide you to.”

So does that mean they’ll always be an instrumental band? Not necessarily.

“We could have 15 saxophone players next year or a gospel vocalist,” reckons Sam. “It’s House Band because, like music as a substance, it’s free flowing. Who knows where we will be in 10 years, or even in one year. It could be totally different.”

Before they turn into a completely unrecognisable group they have an EP to release, the one that they’ve been working on for nine months. It’s 25 minutes and six tracks long, which seems pretty restrained when you consider the excesses of their influences. But then it’s probably better to think of it as one piece of music.

“I suppose that’s where the background of classical music and jazz comes into play,” thinks Sam. “Those long scores, building atmospheres, reprised themes. It’s like taking someone on a journey to the sun.”

In the meantime we’ll have to make do with the jerky, ultra heavy space jazz of ‘Titan’ from the ‘Sea Monsters 2’ compilation and seeing them live, this month at Chris Tomsett and Richard Norris’ Psychedelic Festival in Lewes, and in a dream support slot for Mars Volta-offshoot Zechs Marquise.

“It’s gonna be a really, really great gig,” says Adam. “It’s just great to play with someone who’s like us and almost competing with them.”

“We’ll definitely compete with them,” smiles Dave.
“Yeah,” nods Adam. “I was trying to be modest.”
With this level of ambition and talent we can’t see that false modesty lasting long.

James Kendall was the co-owner and editor of SOURCE. He’s been a music journalist since 1992 and spent over a decade travelling the globe covering dance music for DJmag. He’s interviewed a range of subjects from Bat For Lashes, Foals and James ‘LCD Soundsystem’ Murphy to Katie Price and the Sugababes. He’s a keen photographer and has work featured in The Guardian.
← PREVIOUS POST
In Conversation With Miniclick
NEXT POST →
The Last Carnival Photos
Mailing List
Recent Posts
Website developed in Brighton by Infobo
Copyright © Brighton Source 2009-2021
Physics House Band Interview - Brighton Source