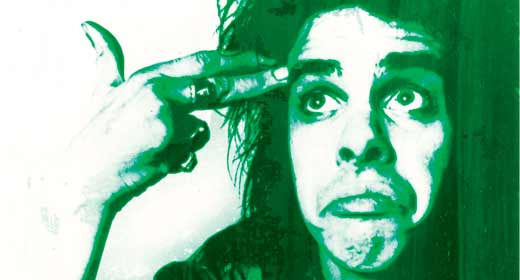 Brighton has plenty of gig venues, so it was a bit of a surprise to hear that Nick Cave’s Grinderman collective were playing at the King Alfred Leisure Centre. They rehearse there as it turns out, and the gig helped pay for band practice. To celebrate this enterprising avarice, here’s six of his best.

RELEASE THE BATS
The standout artefact from Nick’s pre-Bad Seeds outfit, The Birthday Party, here’s a lesson in life for the feckless Marilyn Manson teens skulking through black fringes at Churchill Square. This is how it’s done, a genuinely terrifying record that caught the original early eighties goth mood perfectly.

IN THE GHETTO
We’ve had Elvis, we’ve even had Candi Staton, now here’s the definitive version. If anyone was ever in a genuine position to sing a song of woe like this, check out the video, which sees our troubled troubadour in a glittery tux and pissed bow tie as he shambles heroically through the song

STRAIGHT TO YOU
This would be the talisman card to pull out when girlfriends whine that Nick Cave isn’t for them. Who would have thought the frenzied author of Release The Bats had the versatility and emotional vocabulary to conjure up an absolute classic like this? Possibly his best ever song.

THE MERCY SEAT
One of the modern classics covered by Johnny Cash, The Mercy Seat is simply one of the most visceral and powerful songs ever written. A condemned man’s last lament as he takes his final seat on the electric chair, his head shaved and wired, he maintains he’s nearly wholly innocent but defiantly not afraid to die.

THE SHIP SONG
Another about turn as Nick pulls tenderly once again on the heart strings instead of ripping them out in front of your very eyes., this is the sound of Nick in love, as it later turned out with Polly Jean Harvey. He’d come a long way emotionally from the Australian schoolboy expelled for pulling down a girl’s knickers in the playground.

NO PUSSY BLUES
As a partial aside from the Bad Seeds’ creative confines, Grinderman has seen Nick in far bluesier and generally filthier fettle than we’ve heard in a long time. Feeling the paunch, he muses that whatever he does these days, from changing his sheets to sucking in his gut, the girls in the audience still don’t want to fuck him.