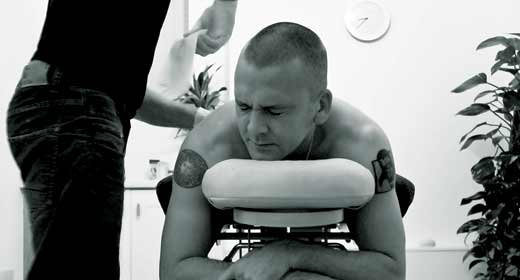 THE REASONS
Back, sack and crack waxing for men has become increasingly popular. Some might think the proliferation of intimate body hair is the essence of masculinity, perhaps trimmed occasionally for neatness, but resolutely present nonetheless. In a sweeping generalisation, I’d imagined male waxing was more or less the exclusive preserve of the gay gentleman, but this couldn’t be further from the truth. According to Mark, waxer and masseur at Natural Balance, around 70% of his clientele are straight; either twice a year too-hairy-for-holiday types or the more regular customer who just likes the smooth-ass results and goes every few weeks.

THE EXPERIENCE
I was prepared for this to be a little bit embarrassing. There’s really no dignified way of having the hair ripped out of your bum cleft. This was to be compounded by the attendance of SOURCE editor James (photography duty) and my girlfriend Nina (her own amusement). Mark, whose familiarity with my nether regions was about to be assured, talked me through the procedure. There would be strip waxing (like a dermatologically-friendly duct tape) on the back and bum, and a specialised hot wax for the more intimate areas, applied and ripped off as a hardened shell. There would indeed be embarrassment – in order to achieve a clean rip the skin must be as taut as possible, necessitating an arse in the air, on all fours position for some of the procedure. But to start with I was to lay face down on the massage table with a doughnut-type padded face ring to grimace through.

Luckily my back wasn’t too hairy. Just a tantalising peek-a-boo patch above the belt – apparently some big bear-type guys have to have an extra half-hour booked in. We were starting off gently. Mark applied the wax and strip, then ripped it off. It smarted for a split second, then nothing. Easy peasy. Stick, rip! Stick, rip! My back was done.

Mark explained that waxing for men was such a new phenomenon that when he started working four years ago it simply wasn’t taught. He’d learned his trade using male volunteers but no distinction had been made in the tuition for the differing follicle foibles of the male undercarriage. We obviously have denser hair and the standard strip wax technique that makes up the female intimate treatment is less suitable for the manly mane. To this end he uses French waxes developed specifically for men. The wax is applied and a lip left to set at one end for gripping and ripping purposes. Without this all-important lip, removing the wax would be like picking a stubborn scab off your scrotum.

The towel was lowered, my buttocks bared. Stick, rip! Stick, rip! Again, this was a level of split-second pain I could easily endure. I’ve had tattoos done you know. For all the inherent indignity of presenting your arse to a stranger (depending on your personal predilections of course), I felt quite relaxed. I’d imagined a torrent of pain. I’d seen The 40 Year Old Virgin ( http://tinyurl.com/458raf) and heard wincing reports from women about their follicle-free-fannies. But with my pert, fleshy mounds now reassuringly baby-soft, it was time to assume the position for some deeper excavation.

This part of the treatment called for the taking of a deep breath, the wax ripped off on its heavy exhale. As the harvest traversed my perineum my gung ho attitude was tested a little to be honest, but it was still nowhere near as bad as I’d imagined. Moving up and under to the sack, I changed position, face up with spread legs and a raised knee. I was asked to pull everything forward to make the skin taut as more wax was spread and ripped. I dragged it all as far forward as I could, as my scrotum took on its pre-teen boyish charm.

Some men like to have the hair removed from the base of the penis – where to draw the line is down to the individual. Not particularly wanting that ‘last chicken on the shelf’ look, I opted against this. So I was done, all that was left was for me to douse myself in wax remover to see off the remaining hardened crumbs, and a liberal application of witch hazel. I was to keep the area dry for 24 hours and reapply witch hazel daily in order to prevent the possibility of folliclitis, where the exposed follicle can become infected and the desirability of the newly smooth buttocks becomes offset by spots.

WAS IT WORTH IT?
If you’re concerned about a hirsute hynie or bearded balls, then tidying them up is certainly not the unpleasant experience I’d imagined. It’s not a cheap thing to do every few weeks, but if you’re tempted then I’d certainly advise going to a specialist. Perhaps surprisingly for Brighton, Mark was the only therapist I could find who’d do the Full Monty, and I certainly wouldn’t advise proffering your posterior to an amateur. I’d also advise heeding the after care advice. I didn’t bother as I thought it would be a pain in the arse. It kind of was after a day or so of neglect.

THE FACTS
Customers range from 19 years old to over 70.
The full back sack and crack costs £75.
There is a slight risk of spotting (where the blood capillaries can break) or folliclitis (preventable by application of witch hazel).